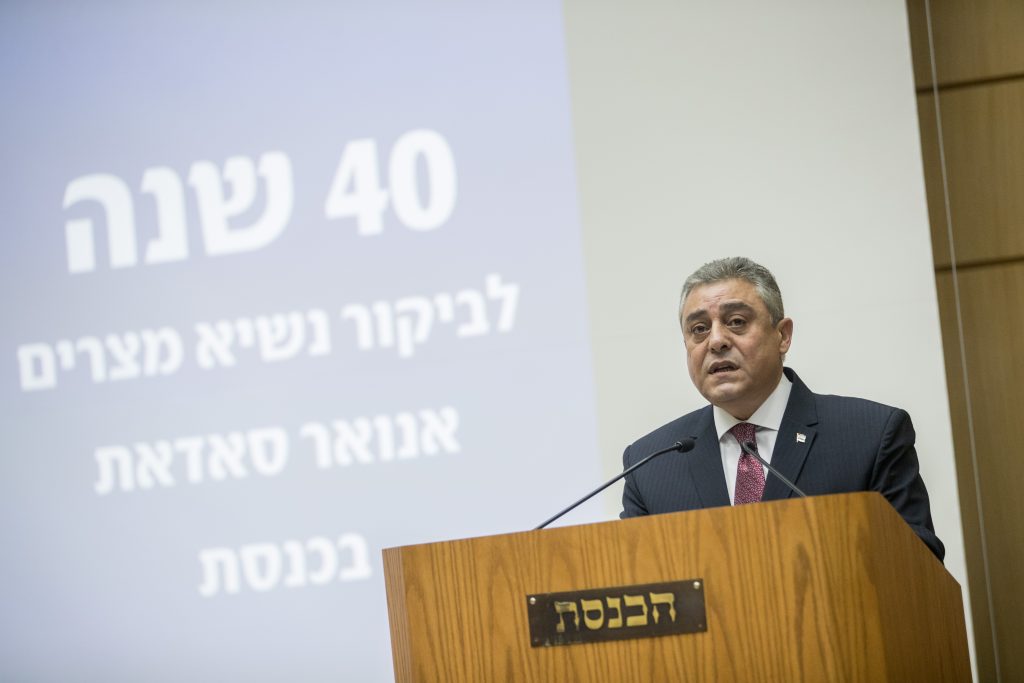 Tuesday’s Knesset session marking forty years since Egyptian President Anwar Sadat flew to Yerushalayim and made a historic appeal for peace at the Knesset was a time for remembering great deeds of the past and lamenting the lack of them in the present.

“It is with sadness that I say, I have not yet met the Palestinian Sadat, who will declare his desire to end the conflict, who will recognize the State of Israel in any borders and our right to security and peace,” Israeli Prime Minister Binyamin Netanyahu said in his remarks.

“Our Palestinian neighbors refuse to recognize Israel’s right to exist,” he added, and quoted from Sadat’s speech, in which the Egyptian leader declared:

“We do not want to surround you, or that you surround us with missiles meant to destroy, or with bombs of hatred and enmity. I have declared more than once that Israel is an existing fact.”

PM Netanyahu continued: “This was the first step towards the peace treaty formulated in Camp David: a clear recognition of Israel.

“This is what Sadat did, unlike our Palestinian neighbors who to this day refuse to recognize our nation state.”

PM Netanyahu left an opening for opposition leader Yitzchak Herzog, who spoke right after him, to fault the prime minister for failing to follow in the footsteps of his Likud predecessor, Menachem Begin:

“We don’t only need a Palestinian Sadat, we also need an Israeli Begin,” said Herzog. “I already said two weeks ago in the plenum, if you were in the place of Menachem Begin, I doubt you would show the same bravery Menachem Begin displayed at the time.”

She said that while there was always “an Israeli Menachem Begin” seeking peace, having a “Palestinian Anwar Sadat” would not be sufficient to resolve the Israeli-Palestinian conflict, which she said was not a territorial dispute but an “existential” one.

“There are more than 200 territorial disputes in the world, but the conflict between us and the Palestinians is not one of them,” said Hotovely.

No amount of willingness on the part of Israeli leaders to relinquish territory for peace has elicited reciprocity from the Palestinian leaders, who have repeatedly turned down the offers while insisting on a full right of return for refugees and refusal to recognize Israel as the state of the Jewish people, she noted.

Hotovely termed the Camp David Accords as “brave choices” by the two leaders.

“I was born into peace,” she said. “This peace is proof, in my view, that the state of Israel desires peace.”

At a Knesset gathering, he told the MKs: “I say to the Israeli side, there is a real opportunity to open a new page with the Arab neighbors, based on coexistence and mutual understanding for a better future leading to peace.”

In an interview on Army Radio, Khairat urged PM Netanyahu to take historic steps for peace, warning that the alternative will be chaos.

“We have to be optimistic there is no other option [to the two-state solution]; without this, chaos will break out everywhere, this is our last option, for you and for all of us,” Khairat said.

Sadat’s 1977 address to the Knesset is credited with paving a path for peace between the countries. Two years later, Israel and Egypt signed a formal peace accord and Israel withdrew from the Sinai Peninsula it had captured in the 1967 war. They have maintained quiet but close security ties since. Israel later made peace with Jordan, too.

Sadat was assassinated by Islamic Jihad on October 6, 1981 during a parade to celebrate the Egyptian army’s “victory” over Israel in the 1973 war, in which it briefly captured a small part of the Sinai before Israeli forces turned it back.