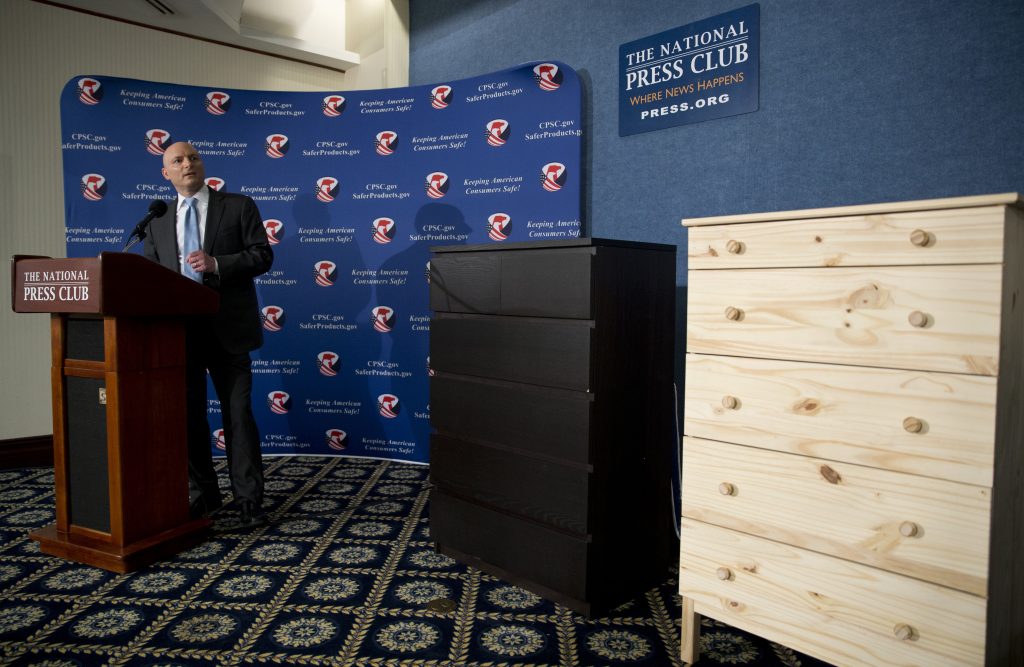 Ikea relaunched a recall of 29 million chests and dressers Tuesday after the death of an eighth child.

CEO Lars Petersson said Ikea wants to increase awareness of the recall campaign for several types of chest and dressers that can easily tip over if not properly anchored to a wall.

The death of a California toddler, who was found trapped underneath an Ikea Malm dresser in May, has raised questions about whether Ikea has effectively spread the word about the recall, which was first announced in June 2016. The Swedish retailer and the federal safety regulators are asking customers to take immediate action to secure the dressers, or to return them.

Petersson said Ikea has had an “extensive communication” campaign through social media, its website  and print ads. The company emailed 13 million people about the recall two months ago, he said.

Still, he said heightening awareness of the recall is necessary “because we think that it’s so important to reach as many people as possible.”

Acting CPSC chairman Ann Marie Buerkle said that people who own the furniture can take care of any potential hazards by contacting Ikea.

The recall, which applies only to customers in the U.S. and Canada, is for children’s chests and drawers taller than 23.5 inches and adult chests and dressers taller than 29.5 inches. Customers should contact Ikea for a free wall-mounting kit. The company is also offering to send crews to attach them in the home.

Ikea is offering full refunds for anyone who no longer wants the chest and dressers manufactured between January 2002 and June 2016. Those with recalled furniture made prior to that can receive a partial store credit. Customers can bring them to a store, or Ikea will pick them up.

At least eight children under the age of three have been killed when an Ikea dresser fell on them, according to the Consumer Product Safety Commission. The first death occurred 28 years ago and the others occurred after 2002.

The latest death was Jozef Dudek, 2, of Buena Park, California. The toddler had been put down for a nap when his father went in to check on him and found him under the dresser, according to details released by lawyers retained by the family.

Alan Feldman, one of the lawyers representing the Dudek family, said Ikea’s recall has been ineffective and the recent announcement will not change that. Rather than distributing wall-mounting kits to people, Feldman said Ikea needs to get “these dangerous dressers out of kids’ bedrooms.”

The Dudek family never received any additional information about the dresser from Ikea even though they bought it directly from the retailer and had given the company their email and home address to join a customer loyalty program.

“It sounded to me like the same lame, ineffective recall that we’ve had since the children were killed,” Feldman said.

The same team of lawyers represented the families of three toddlers who died when Ikea dressers fell on them. Ikea reached a $50 million settlement with those families last December. Feldman said the Dudek family will also sue Ikea.

Petersson said that more than 1 million dressers of have been returned for a refund or have been secured to walls with Ikea’s help since 2015, when the company first offered free wall-mounting kits.

Buerkle said Ikea has “worked hard to make this an effective recall.” She said it presents customers with an array of options “and is as least burdensome to the consumer as it could be.”

Petersson said that Ikea has stopped selling products that do not adhere to U.S. voluntary standards, which were first developed for furniture stability in 2000 and have been updated several times since.

The latest version includes a requirement that furniture like dressers should come with wall restraints.