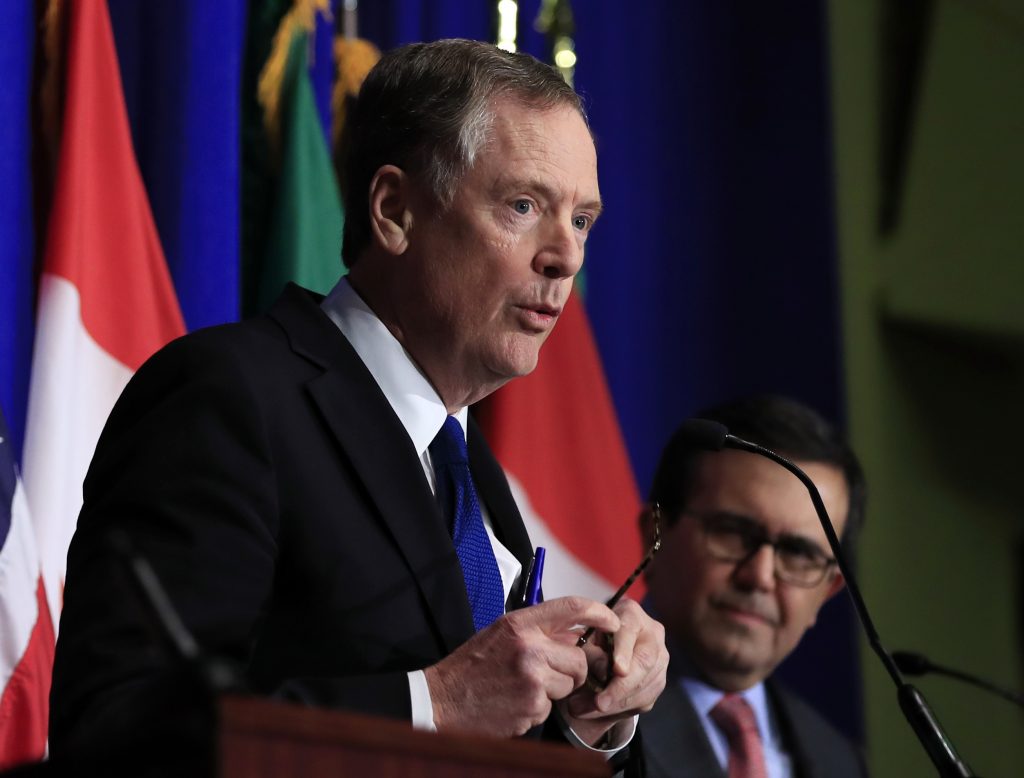 There are few surprises in the goals, given recent revelations and sharp words from NAFTA negotiators. But the Office of the U.S. Trade Representative, or USTR, made some notable additions and changes to the proposal it outlined in July, a month before talks began, adding a new degree of uncertainty to the talks.

Besides affirming that the Trump administration wants to rewrite key portions of the 23-year-old agreement, including access to federal government contracts and minimum local-sourcing requirements, the USTR made it clear that it wants to pry open Canada’s protected dairy market and eviscerate a process in which foreign firms can sue governments for discrimination or expropriation.

The amended summary was released after Sen. Ron Wyden, D-Ore., and civil society groups criticized the USTR for not updating the public on NAFTA renegotiations as required by law. Wyden had held up confirmation of two deputy USTR nominees as a result.

Among the updated goals is new language that the U.S. would seek to limit liability for internet companies that host or transmit online content — a move that will be bitterly opposed by the U.S. music and recording industry, whose sales have been battered by piracy.

In a September letter to the trade representative, Robert Lighthizer, associations for musicians and record labels argued that inserting safe harbors in NAFTA for online firms would amount to “an open invitation to America’s trading partners to act as havens for piracy and refuges for those who illegally infringe American creative content.”

The internet was in its infancy when NAFTA was signed in 1993, but just who in the online world and to what degree they will be shielded from spreading unauthorized copyrighted content, or even fake or biased news, remain unsettled.

That’s why this is “a big deal,” said Nate Olson, a trade expert at the nonpartisan Stimson Center think tank, reacting to the new USTR objectives.

“Cross-border data flows are the Wild West of the global economy,” he said. “Sorting it out will come down in no small part to the rules that govern these online platforms.”

As far as NAFTA negotiators are concerned, they have mostly found common ground on digital trade, and the three parties also have made significant progress on issues related to competition policy, customs, telecommunications and state-owned enterprises.

But the latest USTR summary identified several U.S. aims on which compromise will be hard to achieve.

U.S. officials explicitly stated, for example, that it would work to eliminate “unjustified measures” limiting U.S. dairy products’ access to Canadian markets. And, for apparent emphasis, the USTR inserted that one of its major goals — along with reducing the trade deficit with NAFTA countries — would be addressing import and export monopolies that distort trade.

Canada controls imports of milk and other dairy products in the politically sensitive industry through a government supply-management system. Pres. Trump has railed against the Canadian practice, warning this year that the U.S. “would not stand for this.”

Canadian officials deny that their policies hurt U.S. businesses, and insist that the U.S. similarly protects its dairy farmers. The U.S. is also taking aim at Canadian exports of softwood lumber.

In addition, the USTR indicated that it would press for fundamental changes to a NAFTA provision that allows investors who believe they have been treated unfairly by foreign governments to take their case to a special panel of arbiters whose ruling is final.

The latest summary does not say that the U.S. intends to eliminate the so-called investor-state dispute settlement element in NAFTA, but newly inserted language suggests that rulings by the tribunal would be subject to U.S. government review and possible overrule. The change will be as much hated by the U.S. Chamber of Commerce, which has insisted that such investor protections are necessary, as by Canada or Mexico.

As in the initial set of negotiating objectives, the latest document outlines several top objectives only in vague terms, making it difficult to evaluate the chances of striking a compromise.

Among the most contentious is a U.S. proposal that would allow NAFTA to expire after five years unless all three countries agree to renew it. Mexico, Canada and U.S. businesses say such a sunset clause would inject uncertainty and undermine the value of the pact. In the summary, the USTR merely states that it wants a mechanism to “assess the benefits of the agreement on a periodic basis.”

Nor did the USTR specify how much it wants to strengthen the “rules or origin” for trade in autos, that is, the minimum percentage of a vehicle’s production that must originate in North America — and specifically the U.S. — before it can enter duty-free in any of the three NAFTA countries. Auto manufacturing is highly integrated in North America, and significant changes in sourcing requirements could be highly disruptive and costly.

The talks in Mexico City this weekend are the fifth round of negotiations and will last through Tuesday. The three sides had originally hoped to wrap up by year-end to avoid the political complications from Mexico’s presidential elections next summer, but there are such wide differences that the talks have been extended to as late as March.