World In Paris, Lebanon’s PM Hariri Says He Will Be in Beirut ‘Within Days’
World 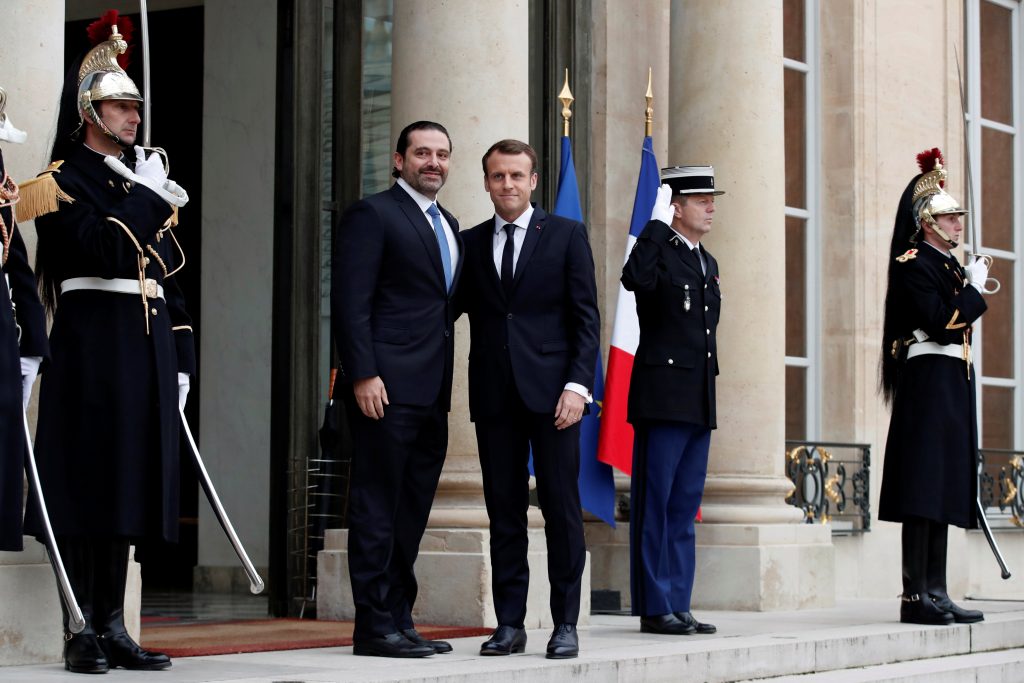 Lebanon’s Prime Minister Saad Hariri said Saturday he will return home in the coming days, from where he will declare a political stance for the first time since making a strange resignation announcement from Saudi Arabia that unleashed fears of a political crisis in Lebanon.

Hariri and his family met Saturday with French President Emmanuel Macron, who invited the Lebanese leader to Paris to dispel fears that he was being held in Saudi Arabia against his will. Macron is seeking to calm tensions and avert a proxy conflict between Saudi-backed and Iranian-backed camps in Lebanon.

Hariri’s appearance in Paris — looking relaxed and posing with his wife and older son on the steps of the Elysee Palace with the French presidential couple in front of a large crowd of journalists — contrasted with his limited-access, carefully choreographed appearances from Saudi Arabia.

Hariri told Lebanese President Michel Aoun on Saturday that he will take part in Independence Day celebrations in Beirut on Wednesday, according to Macron’s office. A French presidential official said Macron spoke Saturday with Aoun, who thanked France for its efforts to help Lebanon.

After his meeting with Macron, Hariri told reporters: “G-d willing, I will attend Independence Day in Lebanon and will declare my political stance from Lebanon and after meeting President Michel Aoun.”

“As you know, I have resigned and we will talk about this matter in Lebanon,” Hariri said after thanking Macron, who he added “expressed pure friendship toward me that I will never forget.”

The Independence Day ceremony is usually headed by the president, prime minister and parliament speaker, and Hariri’s presence could help calm uncertainties that have escalated since his strange and surprising resignation announcement on Nov. 4 from Saudi Arabia.

However, Hariri’s political status is murky. Lebanon’s president refused to accept Hariri’s resignation, accusing the Saudis of holding him against his will.

Before leaving Riyadh, Hariri dismissed as “rumors” reports about his alleged detention in the kingdom. In a tweet, he insisted his stay in Saudi Arabia was to consult with officials there on the future of Lebanon and its relations with its Arab neighbors.

In his resignation announcement, Hariri had cited Iran and Hezbollah for meddling in Arab countries, particularly Saudi Arabia. He also said he was afraid for his life.

Saudi Arabia on Saturday asked its citizens for the second time in less than two weeks to leave Lebanon “as soon as possible” given the “circumstances” there. That raised fears of more punitive actions to come.

The Arab League is due to hold a meeting on Sunday in Cairo at Saudi Arabia’s urging where the Lebanon crisis and Iran’s role in the region are expected to be discussed.

Just before leaving Saudi Arabia, Hariri met with the Saudi Crown Prince and other senior officials, according to a member of Hariri’s political party and two Lebanese media stations.

Hariri landed before dawn Saturday at an airport used for private jets in Le Bourget north of Paris, and came in a convoy to his Paris residence in a high-end neighborhood, where police stood guard. Hariri frequently stays in France thanks to decades-old family ties there.

Hariri’s exact next steps after his planned visit to Lebanon are unclear. A French official said Saturday that France is offering Hariri the necessary support during this time of political turmoil in his country. The official was not authorized to be publicly named.

Macron said he received Hariri “with the honors due a prime minister,” even though he has announced his resignation, since Lebanon hasn’t yet recognized it.

While Macron insists that he’s not offering “exile,” Hariri’s return could be complicated by Lebanon’s internal tensions.

It’s part of a broader Macron strategy to reassert French influence in the region, while the United States under President Donald Trump is increasingly seen as unpredictable or disengaged. Macron’s office says France’s strategy is to talk to all powers in the region and not to appear as choosing a camp.

Another issue might emerge with Hariri’s arrival to France: Dozens of French employees are suing in French courts his Saudi Oger construction firm, which has failed to pay them for months.

The company owes them €14 million ($16.5 million) — an amount Hariri committed to pay after several meetings with French diplomats, but never did, according to the French daily Liberation.