Toxic Algae: Once a Nuisance, Now a Severe Nationwide Threat

Competing in a bass fishing tournament two years ago, Todd Steele cast his rod from his 21-foot motorboat — unaware that he was being poisoned.

A thick, green scum coated western Lake Erie. And Steele, a semipro angler, was sickened by it.

Driving home to Port Huron, Michigan, he felt lightheaded, nauseous. By the next morning he was too dizzy to stand, his overheated body covered with painful hives. Hospital tests blamed toxic algae, a rising threat to U.S. waters.

“It attacked my immune system and shut down my body’s ability to sweat,” Steele said. “If I wasn’t a healthy 51-year-old and had some type of medical condition, it could have killed me.”

He recovered, but Lake Erie hasn’t. Nor have other waterways choked with algae that’s sickening people, killing animals and hammering the economy. The scourge is escalating from occasional nuisance to severe, widespread hazard, overwhelming government efforts to curb a leading cause: fertilizer runoff from farms.

Pungent, sometimes toxic blobs are fouling waterways from the Great Lakes to Chesapeake Bay, from the Snake River in Idaho to New York’s Finger Lakes and reservoirs in California’s Central Valley.

Last year, Florida’s governor declared a state of emergency and beaches were closed when algae blooms spread from Lake Okeechobee to nearby estuaries. More than 100 people fell ill after swimming in Utah’s largest freshwater lake. Pets and livestock have died after drinking algae-laced water, including 32 cattle on an Oregon ranch in July. Oxygen-starved “dead zones” caused by algae decay have increased 30-fold since 1960, causing massive fish kills. This summer’s zone in the Gulf of Mexico was the biggest on record.

Tourism and recreation have suffered. An international water skiing festival in Milwaukee was canceled in August; scores of swimming areas were closed nationwide.

Algae are essential to food chains, but these tiny plants and bacteria sometimes multiply out of control. Within the past decade, outbreaks have been reported in every state, a trend likely to accelerate as climate change boosts water temperatures.

“It’s a big, pervasive threat that we as a society are not doing nearly enough to solve,” said Don Scavia, a University of Michigan environmental scientist. “If we increase the amount of toxic algae in our drinking water supply, it’s going to put people’s health at risk. Even if it’s not toxic, people don’t want to go near it. They don’t want to fish in it or swim in it. That means loss of jobs and tax revenue.”

Many monster blooms are triggered by an overload of agricultural fertilizers in warm, calm waters, scientists say. Chemicals and manure intended to nourish crops are washing into lakes, streams and oceans, providing an endless buffet for algae.

Government agencies have spent billions of dollars and produced countless studies on the problem. But an Associated Press investigation found little to show for their efforts:

—Levels of algae-feeding nutrients such as nitrogen and phosphorus are climbing in many lakes and streams.

—A small minority of farms participate in federal programs that promote practices to reduce fertilizer runoff. When more farmers want to sign up, there often isn’t enough money.

—Despite years of research and testing, it’s debatable how well these measures work. 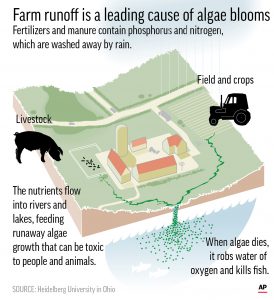 DEPENDING ON FARMERS TO VOLUNTEER

The AP’s findings underscore what many experts consider a fatal flaw in government policy: Instead of ordering agriculture to stem the flood of nutrients, regulators seek voluntary cooperation, an approach not afforded other big polluters.

The U.S. Natural Resources Conservation Service, part of the Department of Agriculture, says it has spent more than $29 billion on voluntary, incentive-based programs since 2009 to make some 500,000 operations more environmentally friendly.

Jimmy Bramblett, deputy chief for programs, told AP the efforts had produced “tremendous” results but acknowledged only about 6 percent of the nation’s roughly 2 million farms are enrolled at any time.

Although the federal government and most states refuse to make such anti-pollution methods mandatory, many experts say limiting runoff is the only way to rein in rampaging algae. A U.S.-Canadian panel seeking a 40 percent cut in Lake Erie phosphorus runoff, wants to make controlling nutrients a condition for receiving federally subsidized crop insurance.

Farmers, though, say they can accomplish more by experimenting and learning from each other than following government dictates.

“There’s enough rules already,” said John Weiser, a third-generation dairyman with 5,000 cows in Brown County, Wisconsin, where nutrient overload causes algae and dead zones in Lake Michigan’s Green Bay. “Farmers are stewards of the land. We want to fix the problem as much as anybody else does.”

Wisconsin issues water quality permits for big livestock farms, where 2,500 cows can generate as much waste as a city of 400,000 residents. But its Department of Natural Resources was sued by a dairy group this summer after strengthening manure regulations.

The state’s former head of runoff management, Gordon Stevenson, is among those who doubt that the voluntary approach will be enough to make headway with the algae problem.

“Those best-management practices are a far cry from the treatment that a pulp and paper mill or a foundry or a cannery or a sewage plant has to do before they let the wastewater go,” he said.

While there’s no comprehensive tally of algae outbreaks, many experts agree they’re “quickly becoming a global epidemic,” said Anna Michalak, an ecologist at the Carnegie Institution for Science at Stanford University.

A rising number of water bodies across the U.S. have excessive levels of nutrients and blue-green algae, according to a 2016 report by the Environmental Protection Agency and U.S. Geological Survey. The algae-generated toxin that sickened Steele in Lake Erie was found in one-third of the 1,161 lakes and reservoirs the agencies studied.

California last year reported toxic blooms in more than 40 lakes and waterways, the most in state history. New York created a team of specialists to confront the mounting problem in the Finger Lakes, a tourist magnet cherished for sparkling waters amid lush hillsides dotted with vineyards. Two cities reported algal toxins in their drinking water in 2016, a first in New York.

More than half the lakes were smeared with garish green blooms this summer.

“The headlines were basically saying, ‘Don’t go into the water, don’t touch the water,'” said Andy Zepp, executive director of the Finger Lakes Land Trust, who lives near Cayauga Lake in Ithaca. “I have an 11-year-old daughter, and I’m wondering, do I want to take her out on the lake?”

The U.S. Centers for Disease Control and Prevention is developing a system for compiling data on algae-related illnesses. A 2009-10 study tallied at least 61 victims in three states, a total the authors acknowledged was likely understated.

Anecdotal reports abound — a young boy hospitalized after swimming in a lake near Alexandria, Minnesota; a woman sickened while jet-skiing on Grand Lake St. Marys in western Ohio.

Signs posted at boat launches in the Hells Canyon area along the Idaho-Oregon line are typical of those at many recreation areas nationwide: “DANGER: DO NOT GO IN OR NEAR WATER” if there’s algae.

A year ago, shortly after a frolic in Idaho’s Snake River, Briedi Gillespie’s 11-year-old Chesapeake Bay retriever stopped breathing. Her respiratory muscles were paralyzed, her gums dark blue from lack of air.

Gillespie, a professor of veterinary medicine, and her veterinarian husband performed mouth-to-nose resuscitation and chest massage while racing their beloved Rose to a clinic. They spent eight hours pumping oxygen into her lungs and steroids into her veins. She pulled through.

The next day, Gillespie spotted Rose’s paw prints in a purplish, slimy patch on the riverbank and took samples from nearby water. They were laced with algae toxins.

“It was pretty horrendous,” Gillespie said. “… How thankful I am that we could recognize what was going on and had the facilities we did, or she’d be gone.”