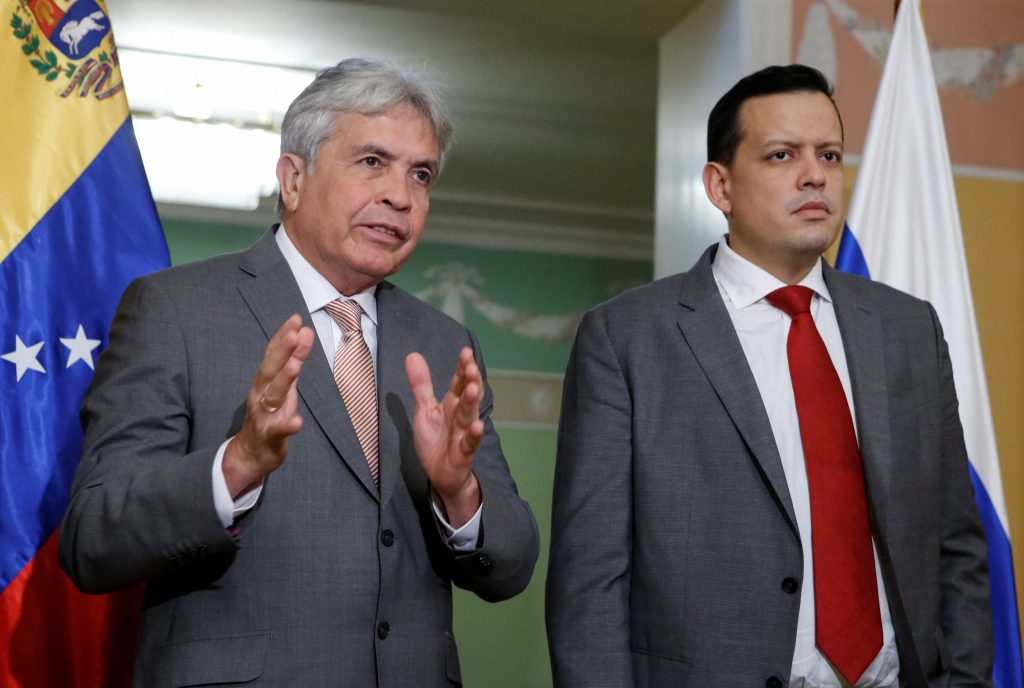 Venezuela won easier debt terms from Russia and got a vote of confidence from China on Wednesday, as the oil-rich country said it had started making interest payments on bonds after a delay that had threatened to trigger a default.

A debt restructuring deal with Russia that allows Caracas to make “minimal” payments to Moscow in the next six years, together with a separate statement from the Chinese Foreign Ministry that Venezuela was capable of handing the debt issue “appropriately,” underlined the reserve of support its socialist government enjoys from both countries.

Venezuela has borrowed billions of dollars from Russia and China over the years, primarily through oil-for-loan deals that have crimped the country’s hard currency revenue by requiring oil shipments to be used to service those loans.

If backed by more debt forgiveness like that offered by Russia on Wednesday, the two countries could provide a lifeline to Venezuela as it seeks to keep its deeply depressed economy solvent, even as U.S. and European sanctions target the government of President Nicolas Maduro.

Critics led by the United States have slammed Maduro as a dictator and assailed him for clamping down on the country’s opposition, jailing dissenters and nullifying the powers of its democratically-elected National Assembly.

Venezuelan bond prices have been on a roller-coaster over the past 10 days, as Maduro called investors to debt restructuring talks, while pledging to keep honoring the country’s obligations. But S&P Global Ratings declared it in selective default on two of its sovereign bonds early this week after it failed to make the coupons within a 30-day grace period.

On Wednesday, the Economy Ministry said it had started transferring $200 million in interest payments on those bonds, which mature in 2019 and 2024.

“Our government keeps complying with its obligations and re-affirms the call to re-negotiate Venezuela’s foreign debt,” the ministry said.

Derivatives industry group ISDA will hold a hearing on Thursday to discuss whether Venezuela and PDVSA have entered default due to the late payments, an ISDA spokeswoman said in an email.

Maduro’s government has vowed to keep making payments responsibly. Creditors who attended a sparsely-attended meeting on Monday in Caracas, which was intended to kick off the debt restructuring talks, said the government negotiators had offered no concrete proposals, however.

Under the deal with Russia that was announced earlier on Wednesday, Venezuela will pay it back a total of $3.15 billion over a 10-year period.

The Russian Finance Ministry said the agreement should free up more funds to allow Venezuela to develop its economy and “will improve the debtor’s payment ability, increasing the chances of all creditors getting their loans back.”

The ministry did not mention PDVSA debt to Rosneft, last estimated by the Russian oil company at $6 billion.

Asked whether PDVSA debt was part of Wednesday’s deal, Venezuelan Economy and Finance Minister Simon Zerpa told a briefing in Moscow that no corporate debt was included.

Venezuela has not requested any help from Russia beyond the agreed deal, a Kremlin spokesman told reporters.

While China did not offer any debt relief, the Foreign Ministry’s statement that China’s cooperation with Venezuela in all areas was “proceeding normally” amounted to a vote of confidence from a country owed $23 billion by the OPEC member.

Venezuela and PDVSA have around $60 billion in outstanding bonds, according to Thomson Reuters data, while private estimates put total foreign debt between $120 billion and $140 billion.