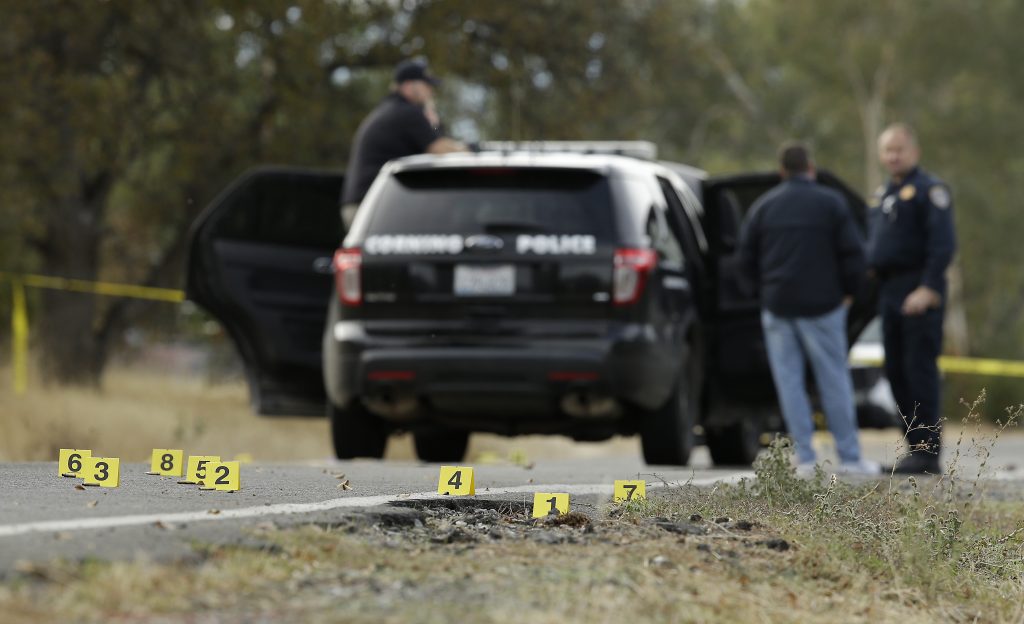 The wife of a gunman who went on a shooting rampage in a Northern California town was found dead inside their home, authorities announced Wednesday, raising the death toll from the attack to five.

Investigators discovered the body of Kevin Janson Neal’s wife hidden under the floor with several gunshot wounds. They believe her slaying was the start of the rampage, said Tehama County Assistant Sheriff Phil Johnston.

At the time of the attack, the gunman was out on bail after he was charged with stabbing a neighbor. Court records also show that Neal was barred in February from having guns after the assault.

Neighbors had complained about him firing hundreds of rounds from his house, and the assistant sheriff acknowledged officers had visited the home on several occasions.

“Every time we responded, we would try to make contact with Mr. Neal,” Johnston said. “He was not law-enforcement friendly. He would not come to the door. His house was arranged in a manner where we couldn’t detect him being there.”

“We can’t anticipate what people are going to do,” Johnston said.

Yet Neal was free and able to use a semi-automatic rifle and two handguns Tuesday to shoot 14 people, including at an elementary school, before he died in the shootout with police.

Court records obtained by The Associated Press show that Neal surrendered his weapons as required by law in February, but Johnston said they recovered two illegally made semi-automatic rifles and two handguns, registered in someone else’s name.

At a news conference Wednesday, Johnston said that Neal’s rampage lasted about 25 minutes, correcting an earlier estimate that it went on for 45 minutes.

Neal shot two of his neighbors in an apparent act of revenge before he went looking for random victims.

“We are confident that he murdered her,” Johnston said.

Cristal Caravez and her father live across a ravine from the roadway where the gunman and his first victims lived.

She said they and others heard constant gunfire from the area of the gunman’s house, but couldn’t say for sure it was him firing.

“You could hear the yelling. He’d go off the hinges,” she said. The shooting “would be during the day, during the night, I mean, it didn’t matter.”

“The sheriff wouldn’t do anything about it,” Juan Caravez said.

The gunman’s sister, Sheridan Orr, said her brother had struggled with mental illness throughout his life and at times had a violent temper.

She said Neal had “no business” owning firearms.

The shooter was facing charges of assaulting one of the feuding neighbors in January and she had a restraining order against him, Johnston said.

The mother, who spoke on condition she be named only as Anne because she fears for her safety, lives in Raleigh, North Carolina, where she raised Neal. She said she posted his $160,000 bail and spent $10,000 on a lawyer after he was arrested in January for stabbing a neighbor. Neal’s mother said the neighbor was slightly cut after Neal grabbed a steak knife out of the hand of the neighbor who was threatening him with it.

She wept as she told the AP she spoke to Neal on the phone on Monday.

“Mom it’s all over now,” she said he told her. “I have done everything I could do and I am fighting against everyone who lives in this area.”

She said Neal apologized to her during their brief conversation, she thought for all the money she had spent on him, saying he was “on a cliff” and the people around him were trying to “execute” him.

“I think the motive [was] getting even with his neighbors and when it went that far — he just went on a rampage,” Johnston said.

Police said surveillance video shows the shooter unsuccessfully trying to enter a nearby elementary school after quick-thinking staff members locked the outside doors and barricaded themselves inside when they heard gunshots.

Johnston said the gunman spent about six minutes shooting into Rancho Tehama Elementary School before driving off to continue shooting elsewhere. Johnston said one student was shot but is expected to survive.

He said the rampage ended when a patrol car rammed the stolen vehicle the shooter was driving and killed him in a shootout.

Witnesses reported hearing gunshots and children screaming at the school, which has one class of students from kindergarten through fifth grade.

Rancho Tehama Reserve is in a sparsely populated area of rolling woodlands dotted with grazing cattle about 130 miles north of Sacramento.