Real and Fake Causes of Terrorism 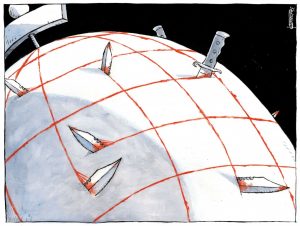 Which of the following is responsible for terrorism in Israel?

(b) Generous Arab funding for terrorists and their families

(c) A failure by the IDF to provide adequate security

(d) The influx to Israel of European Jews (especially from Poland)

Most reasonable people would pick (a) or (b). Some, very few, might blame the Israeli security forces. But blaming the influx of European Jews? That reflects classic Arab propaganda that the source of the “conflict” with Israel is the presence of Jews on “Arab lands,” to which they have no rights or historical connection.

To hear such a claim from an educated person like Britain’s Prince Charles is, to put it mildly, shocking. But that’s what he wrote in a 1986 letter that recently came to light. “I now appreciate that Arabs and Jews were all a Semitic people originally and it is the influx of foreign, European Jews (especially from Poland, they say) which has helped to cause great problems,” the prince wrote.

“I know there are so many complex issues, but how can there ever be an end to terrorism unless the causes are eliminated?” he asks, hinting that the solution is transferring Jews back to eastern Europe, or at the very least putting an end to immigration, as the British did so successfully in the pre-state period.

Then, parroting the canard that the United States is bullied or tricked into acting against its own interests by the all-powerful “Jewish lobby,” he concludes: “Surely some U.S. president has to have the courage to stand up and take on the Jewish lobby in U.S.? I must be naïve, I suppose!”

Naïve is just one word that comes to mind, and not the first.

As infuriating as the prince’s letter is, as inconceivable as it is that such primitive, anti-Semitic, unsophisticated views could reflect the thinking of the royal family, it is important to appreciate that it doesn’t reflect the views of 10 Downing Street.

Prime Minister Theresa May, speaking recently at a dinner marking the centenary of the Balfour Declaration, struck an entirely different note. She expressed pride in Britain’s role in helping create “a most extraordinary country.”

Relating to PA chairman Mahmoud Abbas’ demand that Britain apologize for Lord Balfour’s letter, she said: “Absolutely not. We are proud of our pioneering role in the creation of the State of Israel. We are proud to stand here today together with Prime Minister Netanyahu and declare our support for Israel. We also remain absolutely committed to Israel’s security. For it is only when you witness Israel’s vulnerability that you truly understand the constant danger Israelis face — as I saw on my visit in 2014, when the bodies of the murdered teenagers Naftali Frenkel, Gilad Shaer and Eyal Yifrach were discovered. So I am clear that we will always support Israel’s right to defend itself.

“There can never be any excuses for boycotts, divestment or sanctions on Israel: they are unacceptable and this government will have no truck with those who subscribe to them. Neither can there ever be any excuse for anti-Semitism in any form. And yes, this means recognizing that there is today a new and pernicious form of anti-Semitism which uses criticism of the actions of the Israeli government as a despicable justification for questioning the very right of Israel to exist. This is abhorrent and we will not stand for it.”

But while the prince is wrong, dead wrong, about the cause of terrorism in Israel, he is right that the way to combat Palestinian violence is to eliminate the cause. And in this regard there is a suggestion on the table that should be given due consideration:

A proposed law that would deduct from the duties and taxes on imported goods that Israel collects on behalf of the Palestinian Authority the amount that the authority spends on terrorism.

For example, in 2002, a terrorist who was implicated or involved in the death of 66 Israelis, and was sentenced to 67 years in prison, was awarded NIS 700,000 by the PA. Israel should deduct that sum from the amount it transfers to avoid funding terrorism, either directly or indirectly.

Whether or not it is an effective deterrence, it gets to the heart of one of the causes of terrorism. And as the prince says, “How can there ever be an end to terrorism unless the causes are eliminated?”