Of Bump Stocks and Background Checks 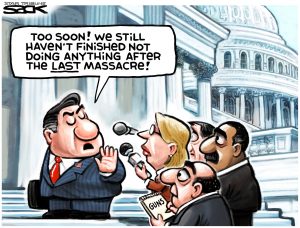 The landscape of Devin P. Kelley’s life was a veritable forest of red flags.

Mr. Kelley, who last week shot to death 26 worshippers in a Texas church and wounded some 20 others, over the years was convicted of beating his wife and stepson, fracturing the latter’s skull; faced charges of animal cruelty; had been investigated for threats against family members; threatened to kill his military superiors; was caught sneaking guns onto an Air Force base; and escaped from confinement in a mental health facility.

The Air Force has admitted that it did not, as required, submit Mr. Kelley’s name to federal authorities for inclusion in a national database that would have prevented him from buying firearms from a licensed dealer.

But there is a two-word phrase in the previous paragraph that conveys the fact that, even had every red flag in the killer’s life been noticed, even had more neighbors reported him, even had the Air Force done its duty, the murderer would still have had no problem procuring his murder weapon — a AR-15-style rifle, the same sort used by the mass killers in Las Vegas last month, Orlando last year and Sandy Hook Elementary School in 2012. (It’s also customizable; adding a “bump stock” can turn the semi-automatic into a virtual machine gun. Sweet.)

The phrase? “Licensed dealers.” Federal law does not require background checks for people buying firearms from other private individuals, as takes place regularly at gun shows across the country. Some states require private sale background checks, but most do not. Texas does not.

That loophole, through which any determined would-be killer can easily pass, was decried by past presidents Bill Clinton, George W. Bush and Barack Obama, to no avail. The NRA argues, with members of Congress nodding their heads obediently, that there are illegal ways for criminals to purchase guns too, so why burden citizens to check a federal registry before selling a semi-automatic rifle to a fellow citizen? One wonders if those congressmen lock their front doors. There are, after all, burglars out there with crowbars.

Asked after the recent massacre about intensified vetting of gun purchases, President Trump responded that the murderer was a “very deranged individual,” and that tighter gun control might have prevented “that very brave person who happened to have a gun” from shooting the killer and averting more casualties.

But that brave man would likely have passed a background check. And, for the record, he didn’t stop the massacre; he shot Kelley only after the killer had left the church.

As to the perpetrator’s mental health, the mentally ill are no more prone to violence than the general population. As Paolo del Vecchio of the federal Substance Abuse and Mental Health Services Administration put it: “Violence by those with mental illness is so small that even if you could somehow cure it all, 95 percent of violent crime would still exist.”

So why was America’s gun homicide rate 33 per million people in 2009, while in Canada and Britain, it was 5 per million and 0.7 per million, respectively? Why, as a The American Journal of Medicine study last year reported, are Americans 10 times more likely to be killed by guns than people in other developed countries?

The only variable that explains the high rate of gun deaths in America is — you may want to sit down — the number of guns in America, and the ease with which we Americans can obtain them.

We make up about 4.4 percent of the global population but own 42 percent of the world’s guns, according to a 2015 study by University of Alabama professor Adam Lankford. The U.S., moreover, has some of the weakest controls of any developed country over who may buy a gun and what sorts of guns may be owned.

Yet, despite the events of recent weeks (and months, and years), gun control remains a frightening phrase to many Americans and their legislators. British journalist Dan Hodges noted with tragic resignation: “In retrospect, Sandy Hook [the 2012 attack that killed 20 students at a Connecticut elementary school] marked the end of the U.S. gun control debate. Once America decided killing children was bearable, it was over.”

The aforementioned Mr. Obama, whose own calls for more gun regulations were stymied by the legislature, reacted to last week’s massacre with a hope that we have “the wisdom to ask what concrete steps we can take to reduce the violence and weaponry in our midst.”