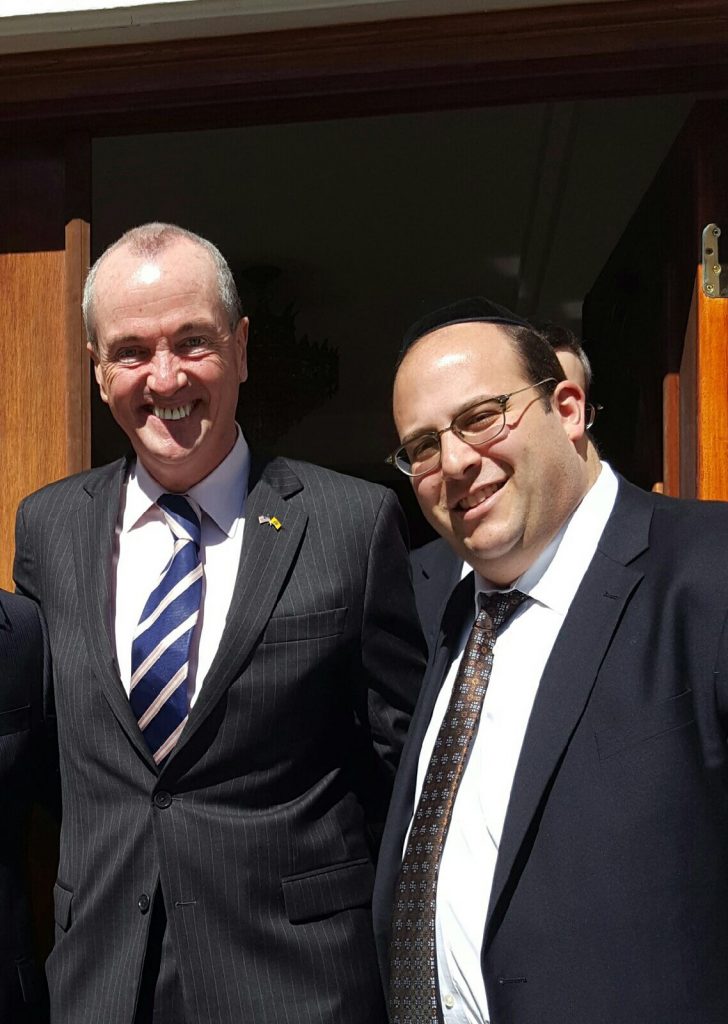 In less than two months, New Jersey will inaugurate its new governor, Democrat Phil Murphy, ushering in a new era for the state after the eight-year administration of Chris Christie. The election result was expected due to Mr. Murphy’s consistent dominance in the polls, yet now that it is a reality, askanim in the state have begun to take stock of what the new face in Trenton could mean for key concerns of the Orthodox community.

Rabbi Avi Schnall, director of Agudath Israel of America’s New Jersey office, said that based on the few times he has met Mr. Murphy, the governor-elect seemed receptive to the unique needs of the Lakewood community, which has become one of the largest townships in the state.

“He’s very in tune to what’s happening,” Rabbi Schnall told Hamodia. “He understands what the town needs and wants to find a way to make it work.”

Lakewood’s school district has been operating under increasingly large deficits for several years. The shortfall is not only a result of the fact that the state does not fully account for the funds that finance busing, special education, and a smattering of other services for the town’s overwhelmingly private-school population, but also that for several years New Jersey’s education funding formula has been “frozen” and has not taken into account increases in public-school populations. The freeze has hurt many growing districts in the state, and compounded the financial woes of the Lakewood district, which is being kept afloat by last-minute loans from the Department of Education. Insufficient resources provided by the state have led to frequent tensions between the public- and non-public-school communities.

Many districts and elected officials have stepped up their criticism over the past year, saying that the formula overfunds some towns while shortchanging others. The state legislature held hearings on changes to the school funding system, and the issue took center stage in Governor-elect Murphy’s campaign.

“The fact that it’s his number-one priority certainly makes us hopeful that things could change for the better, and it’s important that we be part of the conversation,” said Rabbi Schnall.

Rabbi Schnall added that while he very much hopes that Lakewood’s unique needs will be separately addressed, a “fix” for the state formula could play an important role in helping the district’s problems.

“If Lakewood would get fully funded according to what it deserves according to the formula, it would bring in millions to the district,” he said. “Even if nothing would be done about the lopsidedness of the needs of the non-public schools, ultimately it would help.”

Rabbi Moshe Zev Weisberg, a spokesman for the Lakewood Vaad, remained hopeful for a special accommodation in the budget for the district, an approach that has been touted by the town’s state senator, Robert Singer.

“The state only looks at 20 percent of Lakewood’s student population and allocates based on property values. The result is that we get treated like a wealthy district, which is very far from the case,” he told Hamodia. “If they would make a carve-out like they did for Atlantic City, it would address the inequity, and compared to the state’s $35-billion budget, I’m not going to say it would be pennies, but nickels.”

Rabbi Weisberg said that in conversations with community representatives, Governor-elect Murphy has been “non-committal” regarding a special accommodation, but keenly aware of the dilemma.

“He seems sensitive to the need to do something, but I personally don’t know what that will mean,” he said. “He’s very close to the teachers’ union, which is represented on the transition team, and will likely not look kindly at it. We have enough support in the legislature to get a special appropriation in, but it would need the governor’s approval not to get taken out.”

On the issue of whether a statewide formula would help Lakewood, Rabbi Weisberg was skeptical.

“Fully funding the whole state will cost billions, which will require a tax increase,” he said. “There’ll be winners and losers, but if we end up paying for it locally, we could end up losing from one pocket whatever we might gain in the other.”

Rabbi Weisberg expressed optimism that other priorities will also be addressed by the incoming administration. These include maintenance of New Jersey Family Care and the re-instatement of state funds that formerly aided many yeshivos gedolos; allocations have not been made to new applicants since 2009.

Amid wide media coverage over zoning and other legal changes made by several N.J. townships that were seen as overtly aimed at limiting the influx of Orthodox populations, Governor-elect Murphy wrote an op-ed piece openly condemning the town council of Mahwah’s laws blocking eruvin. A short while later, the state attorney general, an appointee of outgoing Governor Chris Christie, filed a lawsuit against the township, issuing with it a warning to municipalities engaged in similar tactics.

Both Rabbi Schnall and Rabbi Weisberg said they were encouraged that the Murphy administration would be a steady force against similar issues in townships surrounding Lakewood.

“We are very optimistic that the approach of the current attorney general will be continued and will monitor these genteel versions of anti-Semitism cloaked in zoning laws — like worrying about preserving the beauty of utility poles — and will take an active role when red lines are crossed,” said Rabbi Weisberg.

Josh Caplan, the state director for New Jersey’s Orthodox Union’s Advocacy Center, said that his initial interactions with the incoming administration have been positive.

“Every new administration gives us fresh opportunities, and we started those conversations before Election Day,” he told Hamodia. “I’m confident that we will continue to have an open line of communication.”

One complication that Mr. Caplan said did need to be addressed is the power shift that has occurred in the Assembly in recent days. As part of a re-organization that replaced the House’s speaker, Gary Schaer (D-Passaic), who led efforts to obtain funding for security at non-public schools, will no longer be serving as chair of the budget committee.

“I think that we’ll get a fair hearing for transportation and nursing and all the services we get, but need to be proactive and build some new relationships,” he said.

While Governor-elect Murphy has not been an open advocate of school-choice initiatives, Mr. Caplan said that voucher and tax-credit programs in nearby states could encourage bringing similar initiatives to New Jersey.

“He [Murphy] doesn’t want to see people leaving the state and going elsewhere. We don’t have any specific expectations, but there are some avenues that might be worth pursuing” he said.