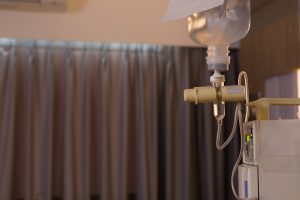 It’s usually one of the first items you’ll see after you enter a hospital room: a small, clear plastic bag filled with a saline or sugar-water solution, hanging above a patient’s bed.

But a serious shortage of the bags used to inject drugs intravenously is now alarming many hospitals after Hurricane Maria in September slammed into Puerto Rico and shut down production at three plants owned by Baxter International, which makes a large percentage of the IV bags used in the United States.

In his 35 years as a hospital pharmacist, Martin Iyoya has never seen anything like the current scarcity.

“We have had shortages, but not like what we are seeing now,” said Iyoya, director of pharmacy services at John Muir Health in Walnut Creek and Concord, Calif.

John Muir doesn’t even rely on Baxter; Pfizer is its main supplier. But the blow to the Baxter plants set off a chain reaction that reduced Pfizer’s supplies.

“Every hospital is impacted to one degree or another,” said Amanda Chawla, who oversees the supply chain at Stanford Health and is working 24/7 to ensure there are enough bags on hand for the next several months. “We have seen back orders of IV solution but not at this magnitude,” she said. “This is a wake-up call.”

Last week, the American Hospital Association and five prominent medical societies wrote a congressional subcommittee and partially blamed the current shortage on the fact that pharmaceutical companies are not required under federal or state laws to disclose where they manufacture different products.

“This lack of transparency puts health-care systems at a significant disadvantage when trying to take a proactive approach to handling a potential drug shortage,” the groups wrote.

Even before Maria hit Puerto Rico as a Category 4 hurricane Sept. 20, IV bags were often hard to get, hospital industry officials say.

Dr. Scott Gottlieb, the U.S. commissioner of food and drugs, acknowledged as much in an Oct. 13 statement that noted that the bags have been in short supply since 2014.

Because of consolidation in the pharmaceutical industry, experts say, there are fewer IV bag producers, while FDA-ordered upgrades to certain manufacturing facilities have sometimes temporarily halted production of the bags in the mainland U.S.

Even though there are other manufacturing plants, Gottlieb said, “the agency and Baxter recognized that further shortage of this product could potentially put U.S health care at risk.”

John Muir goes through 6,000 small IV bags a month, while Stanford Health and its affiliates require about 40,000 monthly.

While the FDA has approved importing the IV bags from manufacturing plants in Ireland, Australia, Mexico and Canada to reduce some of the shortage, the hospital industry believes that will only meet 10 to 15 percent of current demand.

In the meantime, hospitals across the U.S. are being allocated just enough IV bags based on what they have used in the past, said Roslyne Schulman, director for policy development at the Washington-based American Hospital Association.

But, she said, the rationing doesn’t take into account the possibility of a severe U.S. flu season this year — or an even worse scenario such as a pandemic. An unexpected rise in seriously ill flu patients, she said, would require hospitalization and IV fluids to help treat patients, further challenging suppliers.

Last week, the hospital association issued a strongly worded letter to Gottlieb, calling the shortage of IV bags “unacceptable.” The group said that the shortages force workarounds in hospitals that experts say are labor-intensive and could introduce unnecessary risk.

One of the most common workarounds is taking larger-volume IV bags and filling smaller ones. Nurses are also using syringes rather than IV drips to inject drugs.

In its letter, the hospital association said it “is concerned that patients could face harm” if the severe shortages — predicted to last at least through March — are not resolved quickly.

“There is a huge concentration of drug manufacturers in Puerto Rico, but we don’t know what they make or in what amounts or where because it’s proprietary information,” the association’s Schulman said. “The only time we find out is when a plant goes down.”