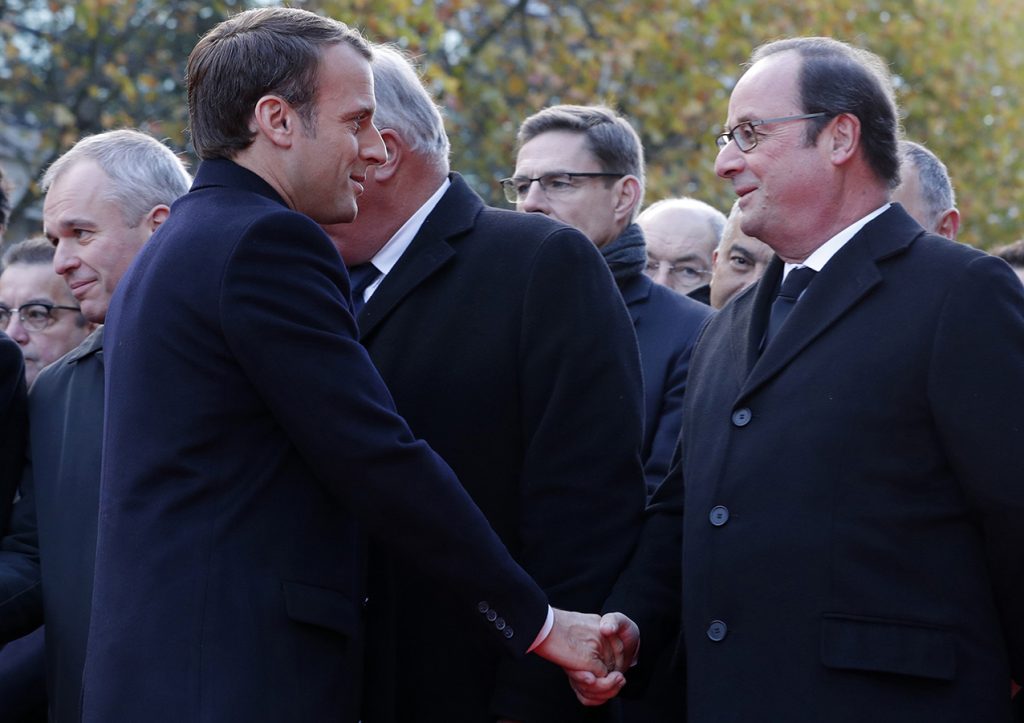 In silence and tears, families of the victims of France’s deadliest terror attacks stood alongside President Emmanuel Macron Monday to honor the 130 people killed two years ago when Islamic State terrorists attacked the City of Light.

Security was tight but low-profile for the memorial events — part of the new normal in France since Nov. 13, 2015.

Outside the Stade de France national stadium, Macron and the mayor of the Paris suburb of Saint-Denis placed a wreath of red, white and blue flowers to honor the Portuguese immigrant killed by a suicide bomber, the first victim of the night’s violence.

The commemorations continued at Paris cafes, where city officials read out the names of the 29 people gunned down.

Dozens of families and Parisians gathered outside the Bataclan hall, where the attacks took their most chilling turn, as terrorists opened fire and held hundreds hostage in an hours-long standoff with police. Ninety people were killed.

Residents recalled the blasts of explosive belts and assault rifles, and described the wariness that has lingered since. Hundreds were wounded; some survivors are disabled for life, and many have deep psychological scars.

The attacks ushered in nearly two years of state of emergency, replaced just two weeks ago with a tough law allowing police wider latitude against anyone suspected of links to radicalism. The state of emergency didn’t prevent subsequent extremist violence, including a truck attack on holiday revelers on the Mediterranean shore of Nice.

While Islamic State terrorists have been ousted from their Syrian stronghold of Raqqa where the Paris attacks were planned, French authorities remain on guard, and the French military remains active in the U.S.-led military coalition against IS.

All but one of the November 2015 attackers were killed. France’s counterterrorism prosecutor says authorities are still looking for suspects involved, and that “zones of mystery” remain about the attacks.

François Hollande, France’s president at the time, described hearing the explosion that killed Dias from inside the Stade de France, where he was attending a sports match with German Chancellor Angela Merkel.

Hollande told France-2 he didn’t want to flee “so as not to let anyone believe there was a risk to the public.” He said that decision “surely saved lives.”