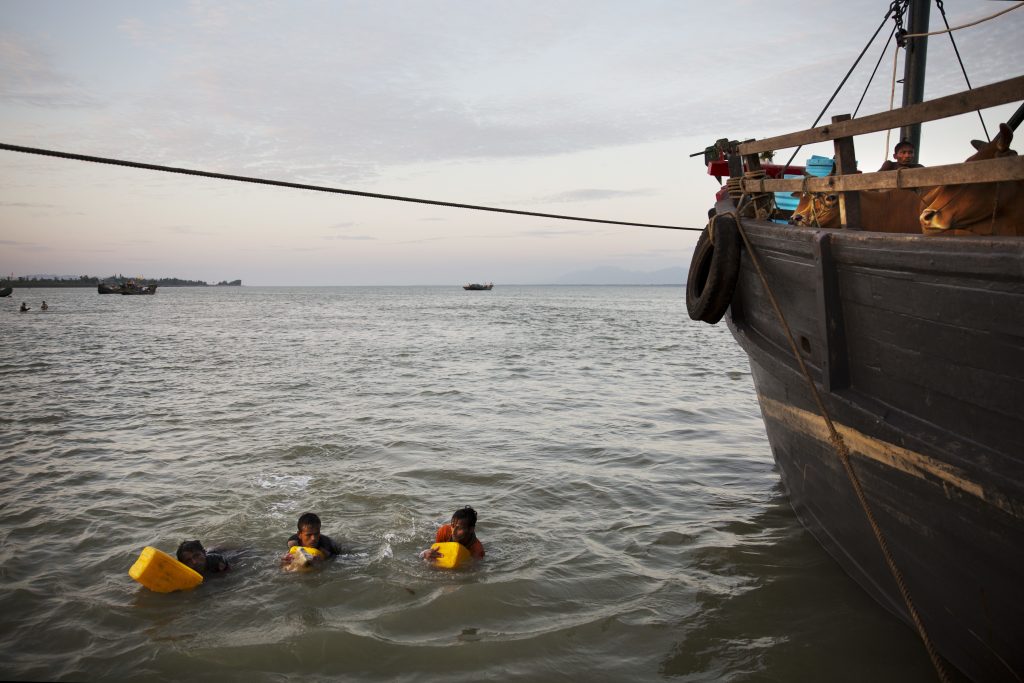 The 13-year-old Rohingya boy couldn’t swim, and had never even seen the sea before fleeing his village in Myanmar. But he clung to the empty container and struggled across the water with it for about 2 1/2 miles, all the way to Bangladesh.

Rohingya Muslims escaping the violence in their homeland of Myanmar are now so desperate that some are trying to swim to safety in neighboring Bangladesh. In just a week, more than three dozen boys and young men used cooking oil containers like life rafts to swim across the mouth of the Naf River and wash up ashore in Shah Porir Dwip, a fishing town and cattle trade spot.

“I was so scared of dying,” said Nabi, a lanky boy in a striped polo shirt and checkered dhoti. “I thought it was going to be my last day.”

Although Rohingya Muslims have lived in Myanmar for decades, the country’s Buddhist majority still sees them as invaders from Bangladesh. The government denies them basic rights, and the United Nations has called them the most persecuted minority in the world. Just since August, after their homes were torched by Buddhist mobs and soldiers, more than 600,000 Rohingya have risked the trip to Bangladesh.

“We had a lot of suffering, so we thought drowning in the water was a better option,” said Kamal Hussain, 18, who also swam to Bangladesh with an oil container.

Nabi knows almost no one in this new country, and his parents back in Myanmar don’t know that he is alive. He doesn’t smile and rarely maintains eye contact.

Nabi grew up in the mountains of Myanmar, the fourth of nine children of a farmer who grows paan, the betel leaf used as chewing tobacco. He never went to school.

The trouble started two months ago when Rohingya insurgents attacked Myanmar security forces. The Myanmar military responded with a brutal crackdown, killing men, and burning homes and property. The last Nabi saw of his village, all the homes were on fire.

Nabi’s family fled, heading toward the coast, passing dead bodies. But when they arrived at the coast with a flood of other Rohingya refugees, they had no money for a boat and a smuggler.

Every day, there was less food. So after four days, Nabi told his parents he wanted to swim the delta to reach the thin line of land he could see in the distance — Shah Porir Dwip.

His parents didn’t want him to go. One of his older brothers had left for Bangladesh two months ago, and they had no idea what had happened to him. They knew the strong currents could carry Nabi into the ocean.

Eventually, though, they agreed, on the condition that he not go alone. So on the afternoon of Nov. 3, Nabi joined a group of 23 other young men, and his family came to see him off.

“Please keep me in your prayers,” he told his mother, while everyone around him wept.

Nabi and the others strapped the cooking oil containers to their chests as floats, and stepped into the water just as the current started to shift toward Bangladesh. The men stayed in groups of three, tied together with ropes. Nabi was in the middle, because he was young and didn’t know how to swim.

Nabi remembers swallowing water, in part because of the waves and in part to quench his thirst. The water was salty. His legs ached. But he never looked behind him.

Nabi is now alone, one of an estimated 40,000 unaccompanied Rohingya Muslim children living in Bangladesh. He looks down as he speaks, just a few feet from the water, and murmurs his biggest wish:

“I want my parents and peace.”

Late afternoon on the next day, authorities spotted a few dots in the middle of the water. It was another group of Rohingya swimming to Bangladesh with yellow plastic containers. They arrived at the same time as a pack of cattle — except that the cows came by boat.