National Veteran Who Lost Both Legs Completes 31 Marathons in 31 Days, Runners Trailing His Every Step
National 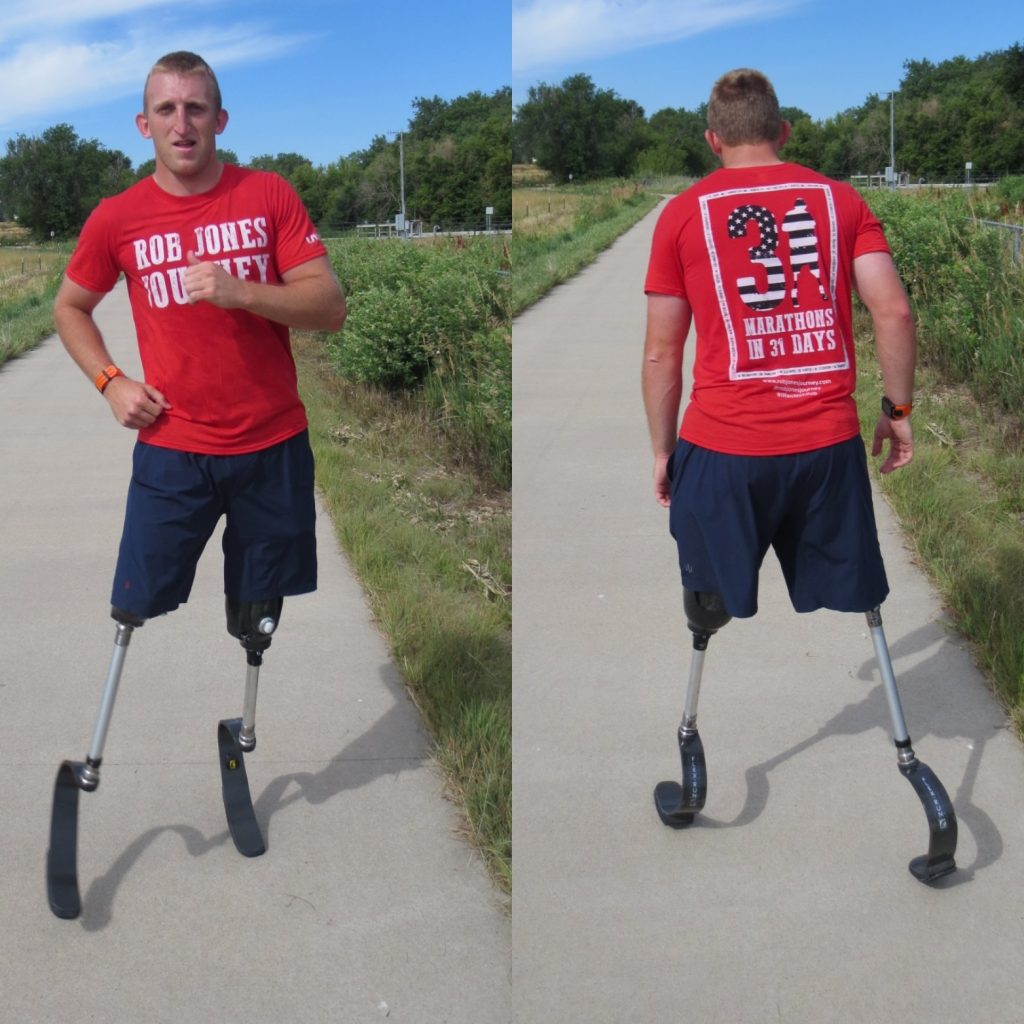 Marine Corps veteran Rob Jones wanted to change the narrative of the broken-down, wounded veteran struggling to transition to civilian life. So, for the past 31 days, he kept running.

He ran to prove a point and to inspire. Jones, who had both legs amputated after being wounded by a land mine while serving in Afghanistan, ran the distance of 31 marathons over 31 days in 31 different cities.

On Saturday afternoon, with his back aching and legs sore, the 32-year-old Jones finished his month of marathons near the steps leading up to Lincoln Memorial on a frigid Veterans Day. The crowd of several dozen supporters showered him with cheers. Jones smiled and took a few moments to let the accomplishment soak in.

“I decided I would create this story of a veteran that was wounded and thrived from it,” Jones said minutes after finishing. “I think I accomplished that mission.”

All month, people followed Jones wherever he went. He started his journey in London, where his wife, Pam, is originally from and his team drove approximately 10,000 miles across the United States in a 35-foot-long motor home, where they slept.

From the time he stepped out of the vehicle, there were runners waiting for him, regardless of the city or weather.

On Saturday, the temperature dipped below freezing for most the day, but there were never fewer than 20 runners who joined Jones on the mile-plus loops surrounding the Reflecting Pool.

“The support has been incredible,” Jones said. “It’s such a great compliment to have all these people come out and hear my story and deem it worthy of their time on the weekend, on a holiday, and come out and support me.”

Some had heard of Jones’ story from friends or read about it online, about how Jones had both legs amputated after being wounded in Afghanistan in 2010 and how he has since become a Paralympic bronze medalist in rowing, biked 5,180 miles across the country and devoted his life to raising money for veterans’ charities.

Jones, a Vienna, Virginia, resident, has a lifetime goal of raising $1 million and estimates that his latest challenge has raised between $125,000 to $130,000. The bike challenge raised an additional $126,000, Jones said.

Michael had heard about Jones’s 31-marathon journey from his father, AJ, a Marine Corps veteran. “I thought he was crazy,” Michael said was initial reaction, but he then texted his friend, Quinn Grimes, and asked him if he wanted to run with Jones. There was no question that Jones had inspired them both.

“The highlights for me … have been seeing kids run out and run with him and ask him questions,” Pam Jones said. “Kids have this amazing ability to ask these really innocent questions that will really impact them for the rest of their lives.”

But the trip also had painful lows. On Tuesday, Jones slipped on a Nashville bridge and badly injured his back.

During a break on Saturday, a woman asked Jones what his plans were to relax.

Jones later said he actually would have gone running in the coming days but that his back injury will force him to take a few days completely off.

“I hate seeing him in pain, but I also know that if this was easy, he would be frustrated because he wants it to be hard,” his wife said. “He wants to be an example of making something hard so that you can challenge yourself to be a better person.”

As for his next challenge, Jones said he doesn’t yet have anything planned. He’ll “use physical exercise for fun” and also indulge in other hobbies that he hasn’t had time for: reading books, listening to podcasts and maybe even perform a few open-mic stand-up comedy shows.

But to those who know Jones best say it’s fair to expect something special.

“Everything he does, he takes it to the extreme and it’s epic,” said 35-year-old Eric Deavilla of Boston, who served with Jones in Afghanistan. “Whatever he does next, it’s going to be worth watching.”