Your House Is a Gigantic Bug Habitat, and There’s Nothing You Can Do About It 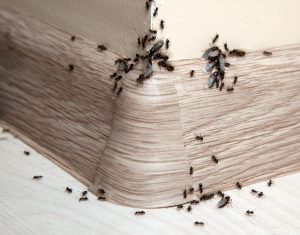 Michelle Trautwein hates to break it to you, but your home belongs to the bugs.

They’re in your basement and your attic. They’re scuttling along floorboards and windowsills. They’ve turned your kitchen cabinets into complex ecosystems, complete with scavengers and parasites, predators and prey. And there’s nothing you can do about it.

That is the latest takeaway from Trautwein’s five-year, five-continent effort to understand the creepy crawly roommates with whom we share our homes.

“We’ve been sampling houses all over the world, and it’s true globally,” said the California Academy of Sciences entomologist. “Bugs don’t respect the limitations, the borders we’ve created. They just view our houses as extensions of their habitat.”

These invertebrate interlopers, she continued, are “an inevitability of living on the planet.”

Trautwein and her colleagues have sampled homes in bustling cities and rural villages in the United States, Australia, Japan, Peru and Sweden. Soon, they hope to visit Africa and Antarctica.

In 2012, the team convinced 50 homeowners in Raleigh, North Carolina, to let them look for bugs inside their houses. Decked out in headlamps and knee pads, the scientists spent hours crawling around on the floors of the strangers’ homes, gently swabbing for critters and depositing their finds in tiny plastic vials.

For their latest paper, published Friday in the journal Scientific Reports, Trautwein and her colleagues wanted to figure out what features of a building make it friendlier to bugs. So, they scored each home on a number of metrics: degree of cleanliness; amount of clutter; presence of pets, pesticides, dust bunnies; number of windows and doors. (To avoid annoying their hosts, the scientists didn’t tell homeowners how they ranked on the cleanliness scale.)

To Trautwein’s surprise, “nothing seemed to make a difference” when it came to bug diversity. Each home had an average of 100 species living in it, regardless of how often the residents cleaned or how many pets they had.

Most arthropods, the group that includes insects, spiders, millipedes and many other spineless creatures capable of giving you the heebie-jeebies, did prefer ground floor, high-traffic rooms with carpeting, with lots of windows and doors. “Which makes sense,” Trautwein said, “since a lot of what we live with is just kind of filtered in from the outdoors.”

When they headed down to cold, damp basements, the researchers discovered a distinct population of darkness-loving cave-dwellers: camel crickets, millipedes, tiny crustaceans.

These insects aren’t just temporary interlopers; they have formed food webs as complex as any you might find in the outdoors. There are prey animals, like scuttle flies, fungus gnats and book lice, which feed on sloughed-off skin and dusty detritus that collects in corners and under furniture. There are opportunistic feeders, like ants. And there are predators, cobweb spiders, ground beetles.

Some creatures, like the German cockroach, are found almost exclusively among humans – they’ve evolved to live within walls, instead of amid trees and grass.

“That gives us the indication that this is really a kind of community that is building indoors,” Trautwein said.

The study dealt with diversity, rather than quantities of bugs, and Trautwein was quick to clarify that there’s a difference between ordinary household bug communities and an infestation.

But she believes some level of bug diversity in a home is probably healthy. Trautwein noted the growing evidence that some modern ailments, such as allergies and autoimmune diseases, may be more likely to occur because we aren’t exposed to as many microbes when we are young. Insects may play a helpful role in hosting and spreading microbial diversity indoors.

Humans have been building homes for millennia. And though we might think of ourselves and our residences as apart from nature, the reality is that we are people who like to build particularly elaborate nests. From a bug’s perspective, a house is as good an ecological niche as any to exploit.

“This whole project has been a really interesting shift of perspective for me, thinking about the indoors as a novel habitat on Earth . . . that’s yet to be explored,” Trautwein said.

Already, the initiative has yielded discoveries. The sampling of homes in Peru led to the detection of a new genus of beetles. The scientists have also sent many fly samples to taxonomic experts; several of them may belong to species that haven’t yet been named.

“We think the places where big discoveries are yet to be made are exotic rain forests or the bottom of the ocean,” Trautwein said. “But there’s still so much we don’t know about the places where we live.”