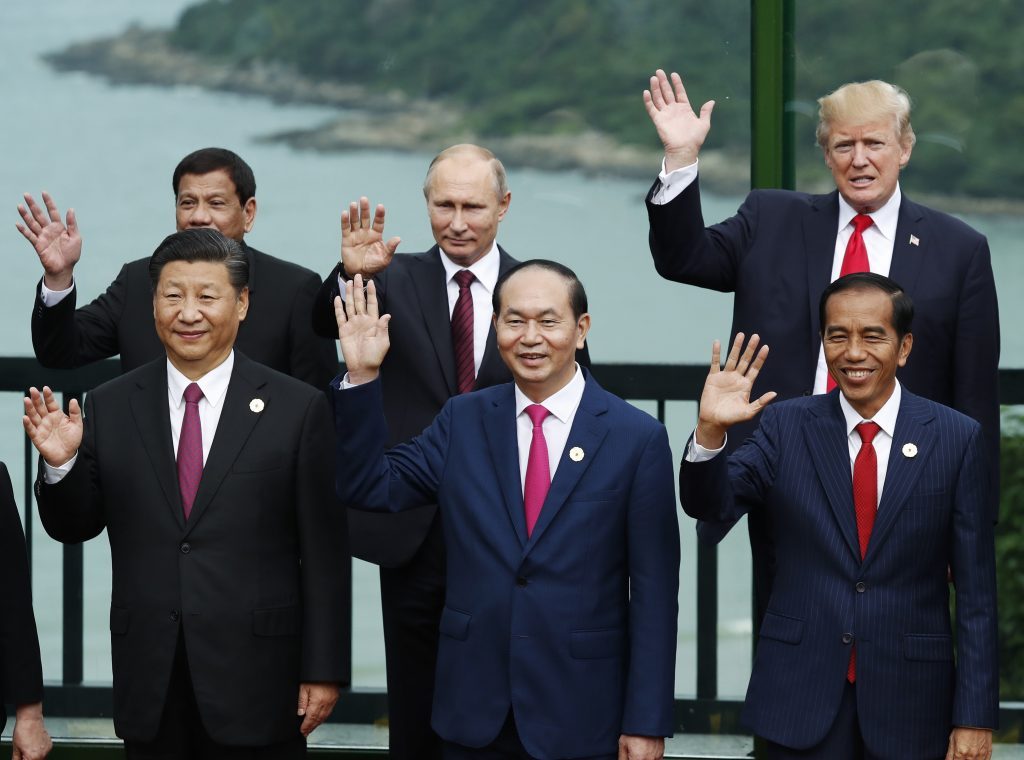 Leaders from across Asia joined President Donald Trump at an extravagant gala dinner in the Philippines’ capital on Sunday, a show of amity in a region fraught with tensions that have lurked behind his marathon tour of the continent.

Philippines President Rodrigo Duterte set the tone of cordiality ahead of the two days of summit meetings he will host, suggesting that despite their differences over claims to the South China Sea, the leaders should not discuss the issue.

“We have to be friends, the other hotheads would like us to confront China and the rest of the world on so many issues,” Duterte said at a business conference, as planes carrying heads of state and government attending the summit landed in quick succession in Manila.

Hours earlier, during a bilateral visit to Vietnam, Trump offered to mediate in the dispute over the South China Sea, where four Southeast Asian countries and Taiwan contest China’s sweeping claims to the busy waterway.

All the claimants will be at the summit, except for Taiwan.

President Trump will join leaders of Southeast and East Asian nations in Manila over the next two days, the last leg of a tour that has taken him to Japan, South Korea and China as well as Vietnam.

The sheer length of the trip — the longest to Asia by a U.S. president in more than a quarter century — may reassure some that, despite Trump’s “America First” policy, Washington remains committed to a region China sees as its strategic domain.

The United States and its former colony, the Philippines, have been strategic allies since World War Two.

Trump is expected to try during the summit to shore up relations, which have been strained by the mercurial Duterte’s notorious anti-U.S. sentiment and his enthusiasm for better ties with Russia and China.

Duterte — sometimes described as the ‘Trump of the East’ because of his brash style — said last week he would tell the U.S. president to “lay off” if he raised the issue of human rights when they met.

Trump’s tour comes against a background of tensions on the Korean peninsula following exchanges of war-like threats and insults between North Korea’s leader Kim Jong Un and Trump over Pyongyang’s nuclear and missile development program.

China has been urged by both South Korea and the United States to take a more active role in curbing North Korea’s nuclear and missile ambitions.

President Trump& said in a tweet on Sunday that North Korean leader Kim Jong Un had insulted him by calling him “old” and said he would never call Kim “short and fat.”

Trump& made the comment after attending the Asia-Pacific Economic Cooperation (APEC) summit in Vietnam.

In a series of tweets he also said Chinese President Xi Jinping was “upping sanctions” on North Korea in response to its nuclear and missile programs and that Xi wanted Pyongyang to “denuclearize.”

One of& Trump’s tweets read: “Why would Kim Jong-un insult me by calling me ‘old,’ when I would NEVER call him ‘short and fat?’ Oh well, I try so hard to be his friend — and maybe someday that will happen!”

Speaking later in Vietnam’s capital, Hanoi,& Trump& said “it would be very, very nice” if he and Kim became friends.

“That might be a strange thing to happen but it’s a possibility,” he said.