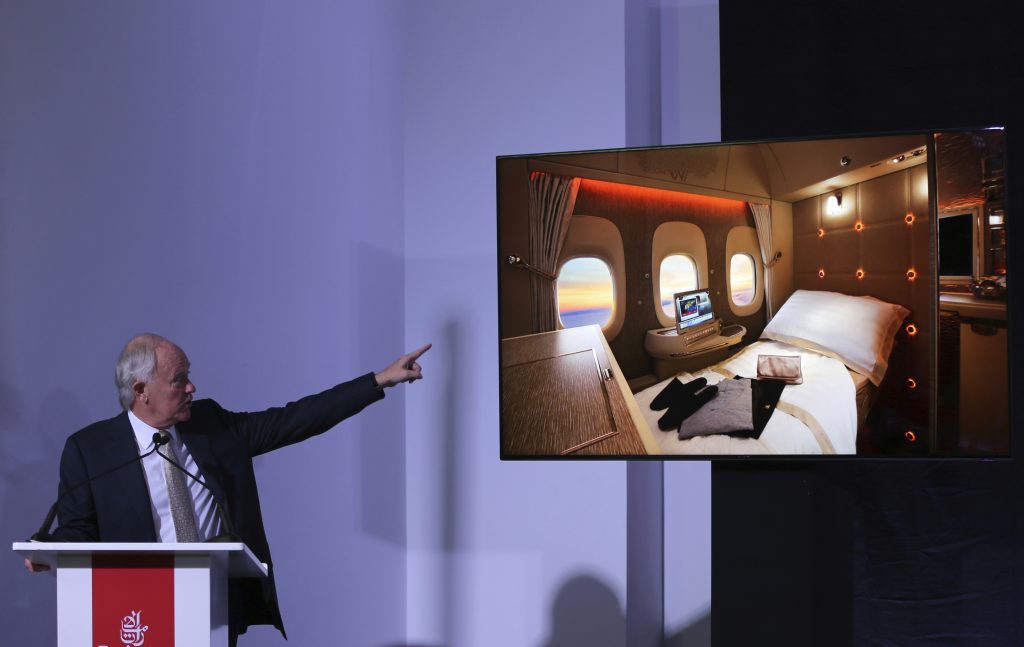 Other airlines also are taking part, but missing from the trade show this year is one of the region’s largest long-haul carriers, Qatar Airways, amid diplomatic fallout between Qatar and four Arab nations.

The Boeing announcement came after several hours of delays by Emirates amid rumors of a possible Airbus sale involving its A380 aircraft, a major workhorse for the airline. Journalists asked Emirates CEO and Chairman Ahmed bin Saeed Al Maktoum about Boeing’s European competitor Airbus, specifically its A350.

“We were comparing two apples,” he said, but found that the Boeing 787 is “the best option” for Emirates. Delivery begins in 2022.

The sale comes as the Qatar dispute is now in its fifth month with no resolution in sight. Saudi Arabia, the United Arab Emirates, Egypt and Bahrain cut ties with Qatar in June over its ties with Iran and its support of Islamist groups, accusing the small Gulf state of supporting extremists, charges it denies. The Arab quartet cut direct flights with Qatar and closed their airspace to Qatari aircraft.

Qatar Airways previously had played a big role in the Dubai Air Show, reserving a large pavilion and displaying its latest aircraft to visitors.

In an industry first, passenger suites in the middle aisle without windows will be fitted with “virtual windows” relaying the sky outside via fiber optic cameras on the plane. There’s also a video call feature in the suites that connects passengers to the cabin crew, as well as temperature control and various mood lighting settings.

Emirates President Tim Clark declined to say how much a ticket in the 40 square-foot (3.7-square-meter) private suite will cost. The private suites will be available on the airline’s Boeing 777.

In previous years, major Mideast carriers have flexed their spending power at the Dubai Air Show, including $140 billion in new orders announced in 2013 before the collapse of oil prices. Prices have rebounded recently to around $60 a barrel.

Regional tensions have spiked further since Lebanon’s Prime Minister Saad Hariri announced his resignation last week from Saudi Arabia. His surprise resignation has raised questions about whether the kingdom forced Hariri to resign in order to wreck the government and pressure the Iranian-backed Hezbollah group.

Saudi Arabia also has tightened its blockade on Yemen after Iranian-allied rebels there launched a missile at the Saudi capital, Riyadh, last week. The Saudi-led war in Yemen, which began in March 2015, has killed at least 10,000 civilians and pushed millions to the brink of famine. The United Nations and aid groups warn that the blockade could bring millions of people closer to “starvation and death.”