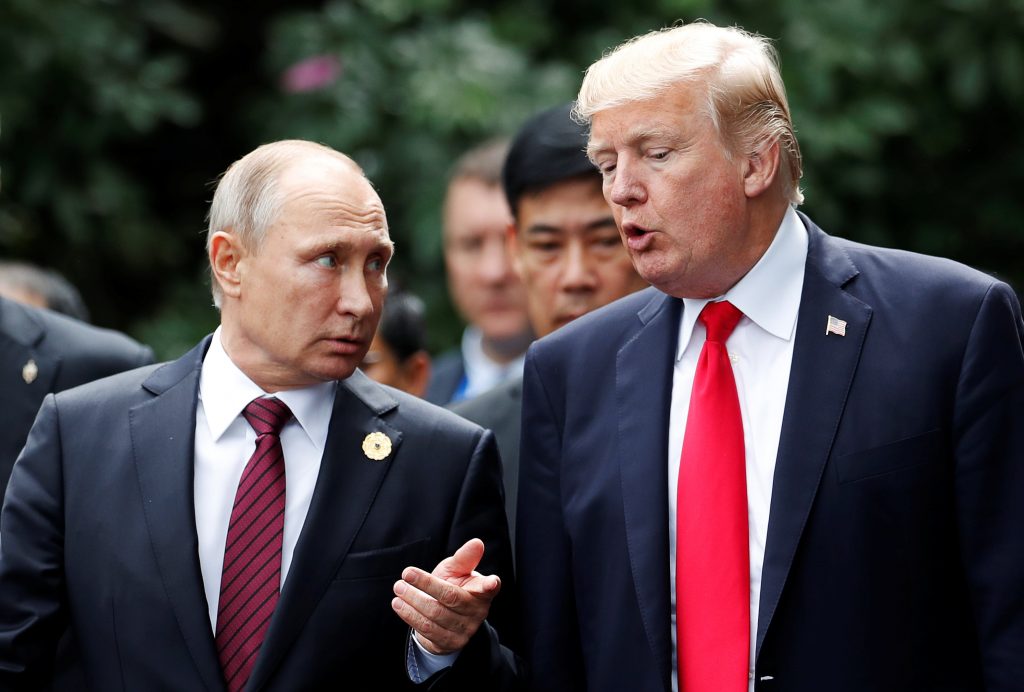 Trump made the comment after he and Putin met briefly at a summit in Vietnam on Saturday and agreed on a statement supporting a political solution for Syria.

It was their first encounter since July and came during a low in U.S.-Russia relations and at a time President Trump is haunted by an investigation into accusations that Putin influenced the election that brought him to the White House.

“Every time he sees me he says I didn’t do that, and I really believe that when he tells me that, he means it,” President Trump told reporters aboard Air Force One after leaving the Asia-Pacific Economic Cooperation (APEC) summit in the resort of Danang.

“I think he is very insulted by it, which is not a good thing for our country,” Trump said.

President Trump, who has called allegations of campaign collusion with Moscow a hoax, has faced questions from Democrats about the matter since he took office. A special counsel, Robert Mueller, is conducting a probe that has led to charges against Trump’s former campaign manager Paul Manafort and his associate Rick Gates.

In Danang, Putin told reporters an alleged link between Manafort and Russia was fabricated by Trump’s opponents.

Putin dismissed suggestions Russia influenced the elections through political advertising. Leading tech companies have said some Russian-bought political content spread on their platforms around the time.

“There is no confirmation of our mass media meddling in election campaigns – and there can’t be any,” Putin said.

After emphasizing on the 2016 campaign trail that it would be nice if the United States and Russia could work together, Trump has had limited contact with Putin since taking office.

Trump again made this case on Saturday, saying it would benefit Washington to have good ties with Moscow so they could work together on issues including Syria’s civil war, the conflict in Ukraine and the North Korean nuclear crisis.

“Look, I can’t stand there and argue with him, I would rather have him get out of Syria,” Trump said. “I would rather … get to work with him on the Ukraine rather than standing and arguing.”

In Vietnam, Trump and Putin agreed in a joint statement that there was no military solution to the conflict in Syria, where Russia has militarily backed Syrian President Bashar al-Assad in a civil war now in its seventh year.

“We did it very quickly,” Trump told reporters. “We seem to have a very good feeling for each other, a good relationship considering we don’t know each other well.”

Talking after their meeting, Putin described Trump as “a well-mannered person and comfortable to deal with.”

“We know each other little, but the U.S. president is highly civil in his behavior, friendly. We had a normal dialogue but unfortunately little time,” he said.

Trump said they had two or three very short conversations.

They were seen chatting amicably as they walked to the position where the traditional APEC summit photo was being taken at a viewpoint looking over the South China Sea.

Pictures from the APEC meeting also showed Trump approaching Putin at the summit table and patting him on the back. They also shook hands at the summit dinner on Friday.

The Kremlin said their statement on Syria was coordinated especially for the Danang meeting.

With the Islamic State terror group having suffered losses in Syria and beyond, greater attention is turning to the broader conflict between Assad’s forces and rebel factions.

They confirmed their commitment to Syria’s sovereignty, independence and territorial integrity and called on all parties to take an active part in the Geneva political process, it said.