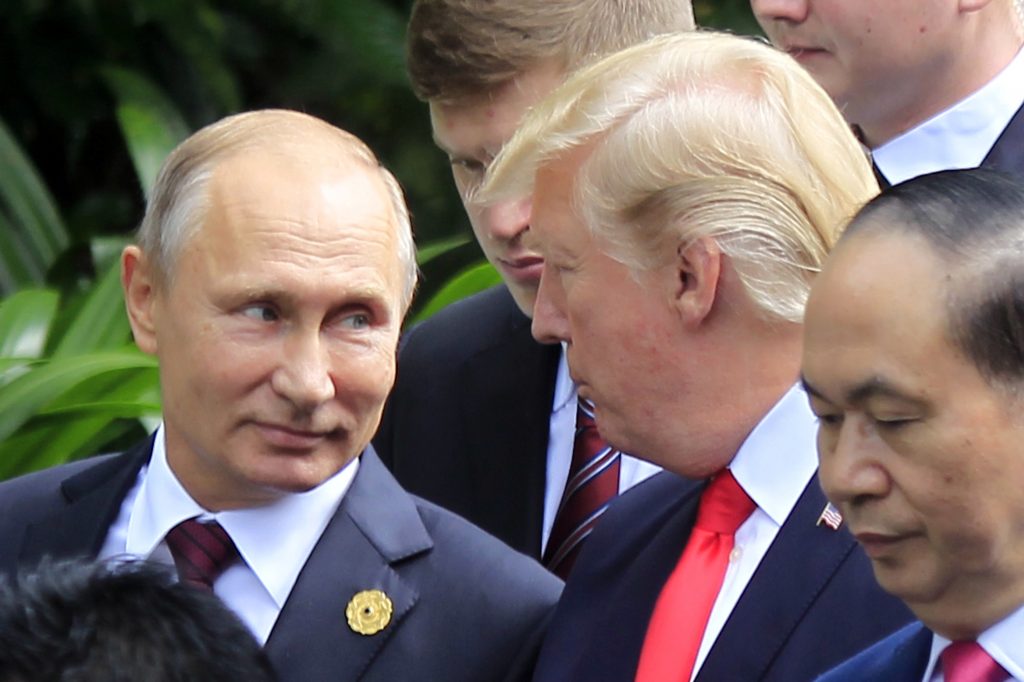 Days before returning home from a whirlwind trip to Asia, President Donald Trump was back on the defensive over Russian election meddling, saying he considers President Vladimir Putin’s denials sincere, dismissing former U.S. intelligence officials as “political hacks” and accusing Democrats of trying to sabotage relations between the two countries.

Speaking to reporters aboard Air Force One, Trump said Russian President Vladimir Putin had again vehemently insisted — this time on the sidelines of an economic summit in Vietnam — that Moscow had not interfered in the 2016 U.S. elections. Trump declined to say whether he believed Putin, but he made clear he wasn’t interested in dwelling on the issue.

“He said he absolutely did not meddle in our election. He did not do what they are saying he did,” Trump said as he traveled to Hanoi, the second-to-last stop of his Asia trip.

“Every time he sees me, he said: ‘I didn’t do that.’ And I believe — I really believe — that when he tells me that, he means it,” Trump said. He called the accusation an “artificial barrier” erected by Democrats — once again casting doubt on the U.S. intelligence community’s conclusion that Russia tried to interfere in the election to help the Republican Trump beat Democrat Hillary Clinton.

In a tweet sent Sunday from Hanoi, Trump bashed the “haters and fools” he said are questioning his efforts to improve relations with Russia and accused critics of “playing politics” and hurting the country.

Trump traveled to Hanoi for a brief state visit. He was due in the Philippines later Sunday for a pair of summits that will close out his trip.

Trump and Putin did not have a formal meeting while they were in Vietnam for the Asia-Pacific Economic Cooperation summit, but the two spoke informally several times and reached an agreement on a number of principles for the future of war-torn Syria.

Trump made clear that the issue of Russian meddling in the election hovers over the leaders’ relationship and said it jeopardized their ability to work together on issues including North Korea’s escalating nuclear program and the deadly conflict in Syria.

“Having a good relationship with Russia’s a great, great thing. And this artificial Democratic hit job gets in the way,” Trump told reporters. “People will die because of it.”

Trump danced around the question of whether he believed Putin’s denials, telling reporters that pressing the issue would have accomplished little.

“Well, look, I can’t stand there and argue with him,” Trump said. “I’d rather have him get out of Syria, to be honest with you. I’d rather have him, you know, work with him on the Ukraine than standing and arguing about whether or not — ’cause that whole thing was set up by the Democrats.”

Multiple U.S. intelligence agencies have concluded that Moscow meddled in the 2016 election to try to help Trump win. But Trump called the former heads of those agencies “political hacks” and argued there’s plenty of reason to be suspicious of their findings.

The comments made clear that Trump still does not take the meddling seriously and sees little benefit in punishing a nation accused of undermining the most fundamental tenet of American democracy: free and fair elections. They also suggest that Trump is unlikely to work aggressively to try to prevent future meddling despite repeated warnings from senior intelligence officials that Russia is likely to try to interfere again.

Meanwhile, a special counsel investigation of potential collusion between Moscow and Trump campaign aides so far has resulted in two indictments for financial and other crimes unrelated to the campaign, as well as a guilty plea. Congressional committees have also been interviewing campaign and White House staff.

“Trump really raised the topic of so-called interference in US elections,” Putin’s spokesman, Dmitry Peskov, was quoted by Russian news agencies as telling reporters. “Putin categorically rejected even the hypothetical possibility that Russia could have in some way interfered in the U.S. electoral process.”

Earlier Saturday, the Kremlin issued a statement saying the leaders had reached agreement on a number of principles for the future of civil war-torn Syria now that the Islamic State group has largely been pushed out. Among the agreements’ key points, according to the Russians, were an affirmation of de-escalation zones, a system to prevent dangerous incidents between American and Russian forces, and a commitment to a peaceful solution governed by a Geneva peace process.

The Kremlin quickly promoted the agreement as the White House stayed silent. Trump told reporters that the deal was reached “very quickly” and that it would save “tremendous numbers of lives.” And he praised his relationship with Putin, saying the two “seem to have a very good feeling for each other and a good relationship, considering we don’t know each other well.”

Video from the summit in the seaside city of Danang, Vietnam, showed Trump and Putin shaking hands and chatting, including during the world leaders’ traditional group photo. The two walked together down a path to the photo site, conversing amiably, with Trump punctuating his thoughts with hand gestures and Putin smiling.

Journalists traveling with Trump were not granted access to any of the APEC events he participated in Saturday.

Trump’s visit to Hanoi began with a state dinner during which he showered the country with praise, saying it has “truly become one of the great miracles of the world.” On Sunday, he’ll meet with the country’s president and prime minister before heading to his last stop: the Philippines.