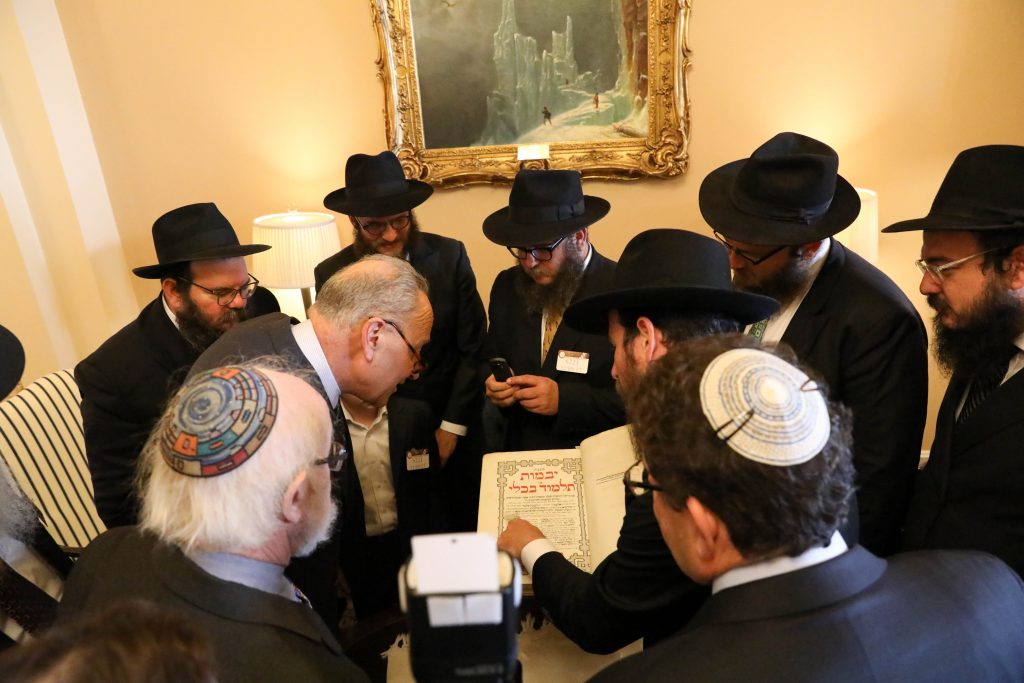 A volume of Maseches Yevamos (Zhitomir, 1862) belonging to Harav Shmuel Schneersohn, known as the Rebbe Maharash, the fourth Rebbe of Chabad-Lubavitch, was given to Chabad following a circuitous turn of events culminating Thursday in Senator Schumer’s office on Capitol Hill.

During the tumultuous events surrounding World War I and the Communist revolution, many sefarim belonging to the Chabad Rebbes over the generations ended up in the hands of the Russian government. Beginning with Glasnost and continuing following the fall of Communism, Chabad has made many attempts to retrieve the sefarim, but those efforts have mostly not been met with success, and 12,000 sefarim remain in the Russian State Library. In a groundbreaking case, the American courts have accepted jurisdiction over the sefarim and have ultimately ruled that Russia must return them, fining Russia $50,000 per day that passes and the sefarim aren’t returned.

Recently, the volume of Maseches Yevamos belonging to the Rebbe Maharash, and bearing his stamp, appeared as an item for sale in a Judaica auction conducted by the Israeli Kedem Auction House, submitted for sale by an unidentified party.

Rabbi Shlomo Cunin, director of Chabad of California, assisted by his sons Rabbis Yosef and Chaim, who lead Chabad’s efforts to pressure the Russian government to return the sefarim, appealed to the federal judge overseeing the case, asking him to extend his order concerning the sefarim to the Israeli courts in order to halt the auction from proceeding. The judge accepted the evidence provided that this sefer was part of the collection and therefore subject to his jurisdiction, and issued a letter of request recognized by Israeli courts.

Following the intervention of the American and Israeli courts, the sefer was removed from the auction, and ultimately handed over to U.S. Ambassador David Friedman. On Thursday, the Gemara was joyously received in the office of Senator Schumer, who has been closely involved in the diplomatic efforts to retrieve the sefarim. In attendance were brothers Rabbis Chaim, Yosef, Mendel, Zushe, Levi and Tzemach Cunin, Rabbi Avrohom Litvin, as well as attorney Nat Lewin and other members of Chabad’s pro bono legal team.

“The discovery of this sacred text in Israel is a simchah for Chabad and the entire Jewish community and I am grateful to have been a part of this joyous occasion,” said Senator Schumer. “However, we will not rest until the entire Schneerson collection is returned to Chabad and I will continue to fight for its return from Russia.”

In a conversation with Hamodia, Rabbi Chaim Cunin cited a letter written in the 1930s by the previous Lubavitcher Rebbe, Harav Yosef Yitzchak, to his son-in-law, the future Lubavitcher Rebbe, Harav Menachem Mendel: “The Previous Rebbe writes in this letter in reference to the sefarim being held in Russia, that the sefarim that tzaddikim learned in contain their neshamos, and therefore when such a sefer is held captive, the neshamah is held captive, and retrieving these sefarim is thus a case of pidyon shevuyim.” Rabbi Cunin expressed the determination of those involved to use every means at their disposal to ascertain whether other items of the collection are circulating similarly in an illicit manner, and his hope to ultimately reunite this Gemara with the other volumes in the set and the many thousands of other sefarim as well.

Rabbi Cunin added that it is his hope that these events serve to inspire anyone who may have such a sefer or part of it in his possession, to take note of the legal and spiritual ramifications, saying, “We urge anyone with information regarding other items from the Chabad library that have been held by Russia, to contact Chabad or our attorneys immediately. We will respect your privacy and anonymity.”

The Gemara is now headed to the Chabad Library in Crown Heights which served the successors of the Rebbe Maharash, the Lubavitcher Rebbe and his father-in-law, the previous Lubavitcher Rebbe.