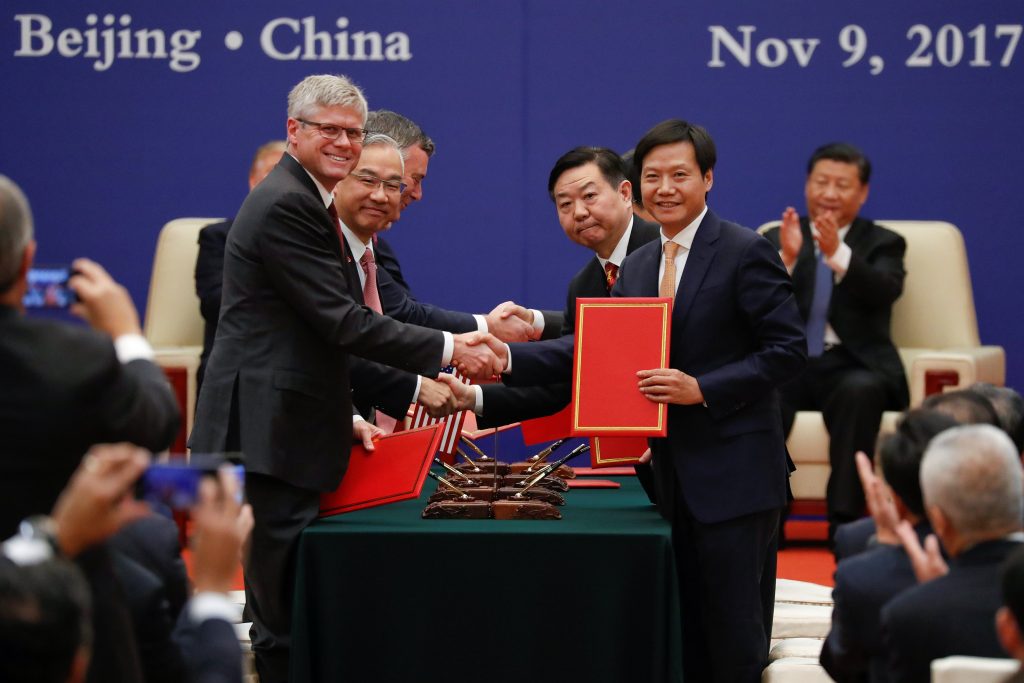 President Donald Trump set aside his blistering rhetoric in favor of friendly overtures to China on Thursday, trying to flatter his hosts into establishing a more balanced trade relationship and doing more to blunt North Korea’s nuclear ambitions.

Winding down his two days in Beijing, Mr. Trump suggested that if the U.S. and China jointly took on the world’s problems, “I believe we can solve almost all of them, and probably all of them.”

In the name of furthering that relationship, the president largely shelved his campaign complaints about China, at least in public. He focused on exhorting Beijing to help with North Korea, an effort expected again to take center stage at an international summit in Vietnam on Friday.

The Chinese rolled out a lavish welcome for the American president. Trump returned the kindness, heaping praise on China’s Xi Jinping and predicting the two powers would work around entrenched differences.

On trade, Trump criticized the “very one-sided and unfair” relationship between the U.S. and China. But unlike his approach during the campaign, when he castigated China for what he contended were inappropriate trade practices, he said Thursday that he didn’t blame the Chinese for having taken advantage of the U.S. in the past.

Tillerson also acknowledged there were differences in “tactics and the timing and how far to go with pressure” on North Korea. But he insisted that the two countries shared common objectives.

“There is no disagreement on North Korea,” he said.

The comments by Trump and his top diplomat came after lengthy meetings with Xi. The day included announcements that the U.S. and China had signed agreements valued at more than $250 billion for products including U.S.-made jet engines, auto parts, liquefied natural gas and beef.

Such contract signings, a fixture of foreign leaders’ visits to Beijing, are intended to defuse complaints about China’s trade policies.

Xi promised a more open business environment for foreign companies in China and said his country was committed to further opening its economy to outside investment.

“China will not close its doors” and will open them “even wider,” he said, pledging that foreign companies in China, including American ones, would find the market “more open, more transparent and more orderly.”

Trump was feted at a state dinner that featured a video montage of the president’s visit, as well as footage of his granddaughter, Arabella, the daughter of Ivanka Trump and Jared Kushner, singing a traditional Chinese song in Mandarin.

On Friday, Trump was scheduled to stop in Da Nang, Vietnam, for the Asia-Pacific Economic Cooperation conference — the first of multiple summits he’ll attend on his first trip to Asia as president.

He may meet with Russian President Vladimir Putin on the sidelines of the conference. Tillerson said Thursday the two sides were still discussing whether they had “sufficient substance” to talk about in such a meeting.