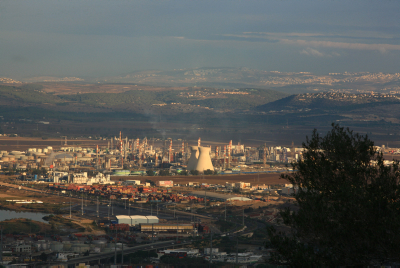 The Knesset Economics Committee has authorized a rule change that will allow municipalities to ban vehicles that exceed new pollution standards from the city center, with the Haifa municipality set to be the first in the country to do so.

Vehicles will have to match or beat the Euro-4 emissions standard, or face fines of NIS 500 or 1,000 ($142-$284). Yerushalayim and Tel Aviv will soon be joining Haifa, the Committee said.

The ban will be implemented in several stages, first applying to vehicles that weight more than 3.5 tons- mostly buses, vans, and light and heavy trucks that operate on diesel, to be expanded to all diesel vehicles afterwards. Signs will be posted on streets where the vehicles are banned. Violators driving commercial vehicles will be fined NIS 1,000, while passenger vehicle drivers will be fined NIS 500. Most vehicles sold in the past ten years match the Euro-4 standard, but the Committee will soon publish a list of specific vehicles and model years that do and do not match the standards.

Opposing the idea was Shuky Sadeh, chairman of an umbrella group representing bus and transport companies. According to Sadeh, passing laws that will ban buses and minivans from city centers “will have serious consequences for traffic in cities.”