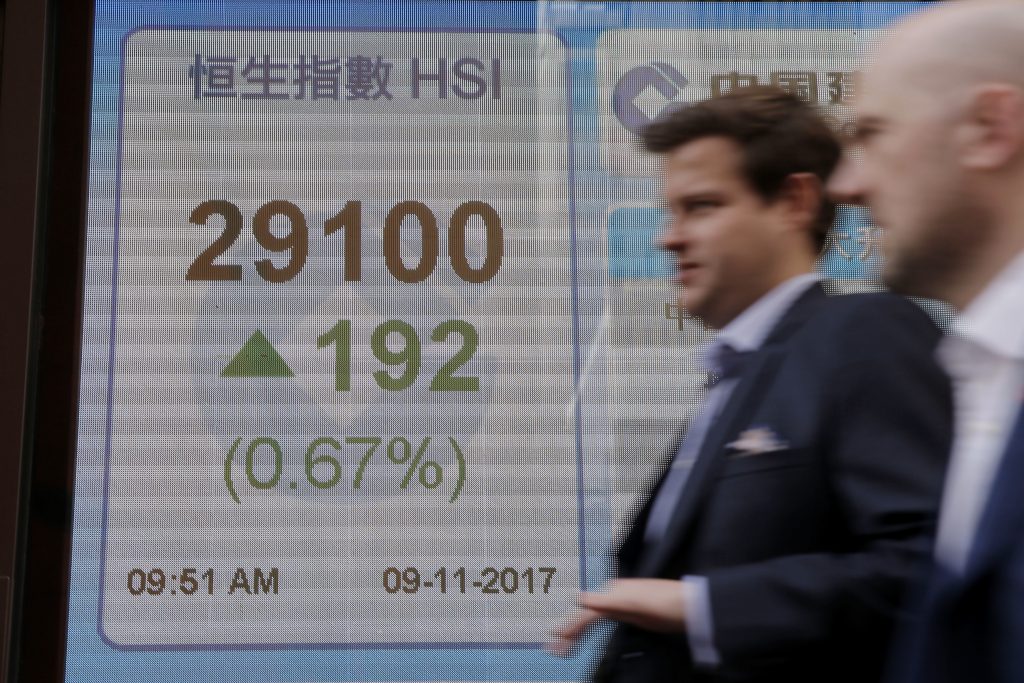 Asian stocks stayed closed to a decade-long peak on Thursday following another record-breaking day on Wall Street, though Japan’s Nikkei slid back from a 26-year high in volatile trading, hit by profit-taking.

The dollar slipped amid uncertainty over the fate of U.S. tax reform plans, while the New Zealand dollar rallied as hawkish-sounding statements by the country’s central bank boosted the recently battered currency.

MSCI’s broadest index of Asia-Pacific shares outside Japan was up 0.2 percent and in close reach of a 10-year high set the previous day, taking cues from overnight Wall Street gains.

Australian shares rose 0.55 percent and to their highest level since January 2008. South Korea’s KOSPI, which had a succession of record highs in past weeks, handed back earlier gains and was flat.

Japan’s Nikkei initially surged 2 percent to reach a high not seen since January 1992 but reversed course and ended the day down 0.2 percent.

“There was no news that drove the Nikkei lower. The market was looking increasingly lofty after surging in the morning and sellers emerged in the futures, which spilled over into the cash market,” said Masahiro Ichikawa, senior strategist at Sumitomo Mitsui Asset Management.

“The market was beginning to look very rich and there were profits to be locked in.”

The kiwi flew after the Reserve Bank of New Zealand (RBNZ) said early on Thursday that added fiscal stimulus and a lower local dollar would lead to faster inflation and likely an earlier rise in interest rates.

On Thursday, the central bank held rates steady at 1.75 percent, as widely expected.

In late October, the New Zealand dollar sunk to a five-month low of $0.6818 as a change in government unsettled investors.

The dollar index against a basket of six major currencies was 0.1 percent lower at 94.789, staying below a three-month high of 95.150 set in late October. It had reached that peak on hopes for enactment of U.S. tax reforms. But recent uncertainty over the fate of the tax plans has weighed on the dollar.

A U.S. Senate tax-cut bill, differing from one already in the House of Representatives, was expected to be unveiled on Thursday, complicating a Republican tax overhaul push and increasing skepticism on Wall Street about the effort.

“There’s very much a risk of disappointment. The U.S. dollar could go through a weakening phase on the back of uncertainty around that tax reform,” said Steven Dooley, currency strategist for Western Union Business Solutions in Melbourne.

Government data showing a rise in domestic crude production had weighed on oil overnight but rising tensions in the Middle East limited the losses.

U.S. crude rose to $57.92 on Wednesday, the highest since July 2015, as tensions flared between Saudi Arabia and Iran, while the Saudi crown prince tightened his grip on power.

The precious metal had risen to a three-week high of $1,287.13 an ounce the previous day as a potential delay in the U.S. tax reform plan was seen moderating the Federal Reserve’s interest rate hikes next year and supporting non-yielding gold.

Palladium was 0.1 percent higher at $1,014.25 an ounce. The metal used for auto catalysts has rallied on an expected supply deficit and higher demand in the car market, reaching a 16-year high of $1,019 on Wednesday.