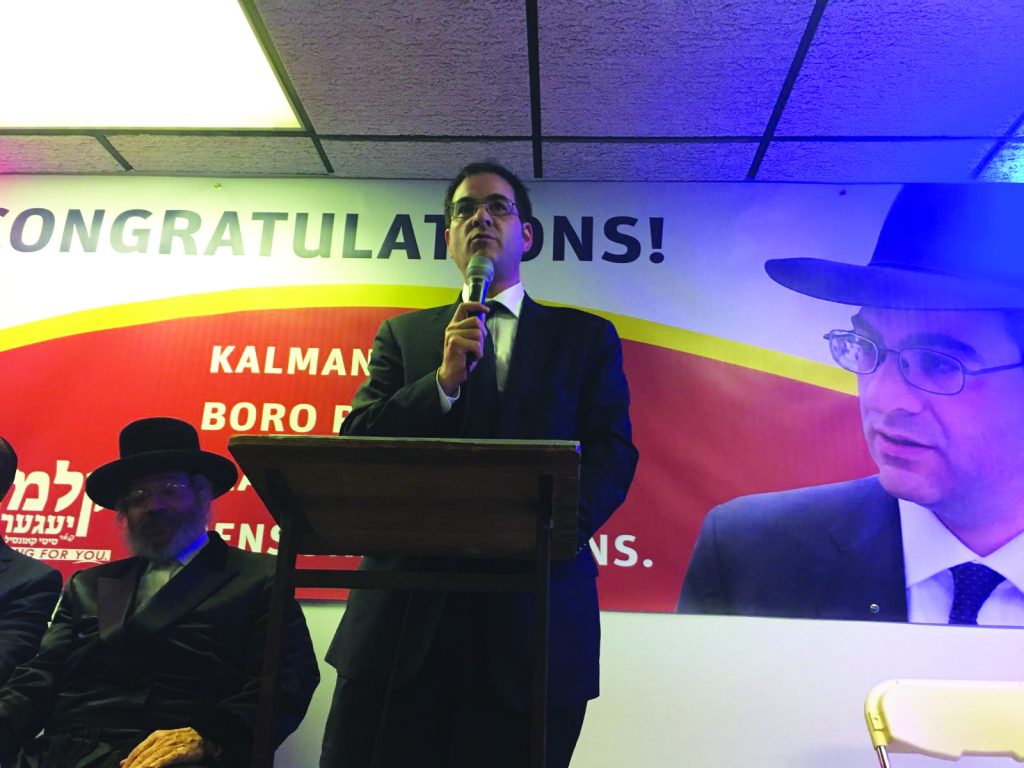 On the day after a landslide victory in the election for City Councilman for the 44th District, Kalman Yeger spoke with Hamodia about his plans for the community he will serve for the next four years.

Following what was at times a testy election campaign, Yeger had said Tuesday night that he will seek to prove that he will serve everyone in the district, whether they supported him or not, declaring that “the achdus begins right now.”

“My obligation is to do a good job for everybody in the community, across the district, and that’s what I’m going to work very hard to do, as I’ve talked about throughout my campaign,” Yeger told Hamodia on Wednesday. “My life in public service has been an open book. People who know who I am and who have learned who I am know that I’ve always served everybody. And that’s what I’ll continue to do as their councilman.”

Among his first orders of business is achieving communal priorities in the city’s budgetary process, which will begin early in 2018. He is seeking funds for after-school vouchers, as well as for expanding the yeshivah security-guard law — which he helped draft with Councilman David Greenfield — to include yeshivos with fewer than the current minimum of 300 students.

Emphasizing the relationships he has built over his years working in government, the councilman-elect says he will reach out to state Senator Simcha Felder to see how the city and state can work together — perhaps there are some programs “the city can do and the state can fund” and “to work on things Simcha has pushed for and see how we can bring them into our community.”

There are other early priorities that Yeger wants to work on that don’t need legislation, such as bringing the Department of Transportation to the community to do traffic studies and offer solutions for troublesome areas. This, Yeger says, is “an extreme priority for Flatbush and Boro Park.”

One of the issues Yeger is particularly passionate about is not allowing governmental interference in the chinuch system.

Yeger says he will seek to serve on the Education Committee, and called the issue “a priority for our community, especially since some councilmen have lasers guided at our yeshivos. I want to make sure they don’t pull any shenanigans and start harassing our yeshivos more than they already have.”

Nobody will walk “through the doors of our yeshivos telling our yeshivos what to do,” says Yeger forcefully. “They’ll have to get through me first.”

He’ll also seek to serve on the Transportation Committee to try to improve the massive traffic that is a feature of everyday life in the district, and on the Public Safety Committee.

“We are a community that has deep concern, for necessary reasons, about our public safety,” says Yeger, noting that he has “worked with police for my entire career and had the endorsement of every police union.” He says he’ll seek to work with the police “to make sure they have the resources they need to do their job.”

In response to a question about upholding traditional moral values, Yeger says, “I am going to vote the way I believe my upbringing requires and who I am and the people I represent, as I have conducted myself throughout this campaign. When a question comes up, I talk to daas Torah. They give me the chizuk and guidance to know what is right to do.”

Yeger frequently cites the legendary Rabbi Moshe Sherer, z”l, as an early mentor in the world of askanus, noting that it was Rabbi Sherer who first encouraged a 19-year-old Kalman seeking his guidance on whether to embark on a political career.

During those final years of Rabbi Sherer’s life, Yeger says there was “no step that I took on my own,” without first consulting Rabbi Sherer for guidance, permission and a brachah.

“That’s the way I live my life. And just because I hold public office there is no reason to change.”

One of Yeger’s most oft-repeated views is that he doesn’t believe in an overbearing government with its “foot on the neck” of the people. One example he cites is the difficulties that small businesses and yeshivos have with the numerous inspections they face, whether from the Fire, Building, or Health Departments. The at-times uncoordinated, redundant inspections are an example of “government not acting at its optimal,” says Yeger. “We need to unify record-keeping and inspections so they can create one centralized reporting and inspection system.”

Finally, what is the newest soon-to-be councilman’s view of how, in an ideal world, the 44th City Council District would look like in four years, at the end of his first term?

“Safer streets that are able to move faster, and for our kids to be able to breathe more easily. Less traffic and congestion. For people to be able to enjoy our parks, to expand them and possibly have more of them.”

Yeger says that serving in public office is not a right, but a privilege and an honor.

“The people have entrusted me with their future for the next four years. It is a sacred obligation. I will honor it, do them well, and work as hard as I possibly can.”