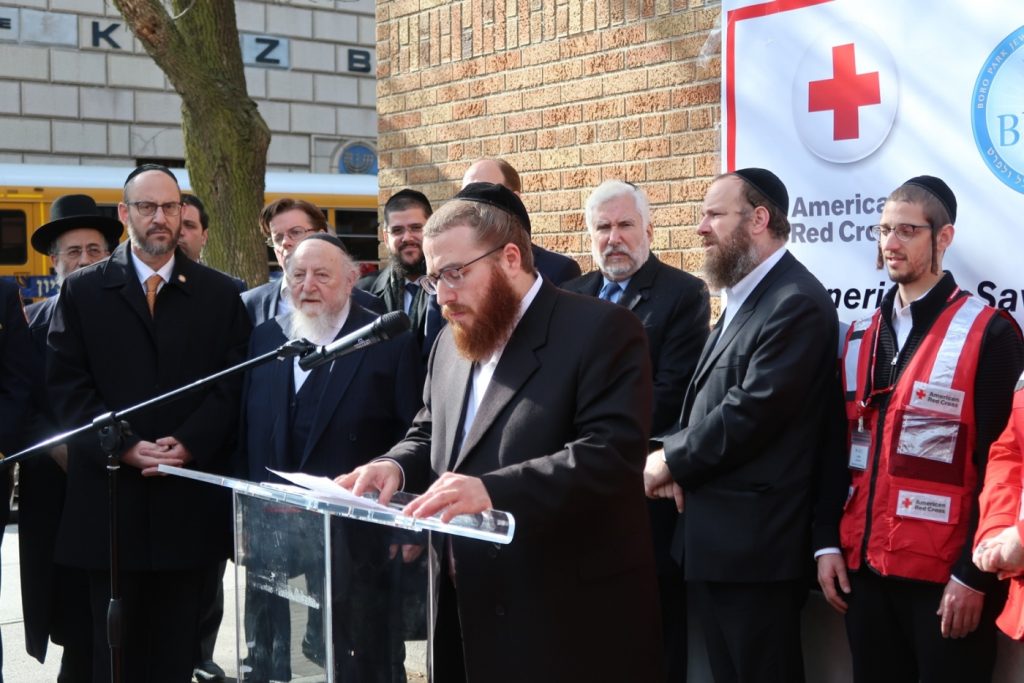 Boro Park residents gathered early Wednesday afternoon in front of the Boro Park Jewish Community Council on 14th Avenue for an important announcement about a new community safety initiative. At the event, attended by elected officials and community leaders, the BPJCC announced a new partnership with the American Red Cross in Greater NY, in response to numerous recent incidents in the community in which undetected blazes caused damage to property, or worse.

The new fire-safety and emergency-preparedness partnership will aim to hand out thousands of smoke detectors free of charge to Boro Park residents who lack them, ensuring that fires can be caught in time or that precious possessions and lives can be evacuated — before it’s too late — in case of emergency. There will also be a fire safety awareness campaign tailored specifically to the Jewish community’s needs and challenges.

Avi Greenstein, executive director of the Boro Park Jewish Community Council, told Hamodia that the event had a good turnout and was effectively a kiddush Hashem. “The Boro Park JCC is now an established entity that outside organizations will be seeking to partner with for the benefit of the community,” he said. “This is just the beginning of a permanent relationship with the American Red Cross. We will now be the central destination for further initiatives to come in this community.”

Greenstein emphasized that the free smoke detectors being distributed won’t be limited to one per family; a smoke detector will be installed in every room lacking one, without limit. There are also no limitations based on income eligibility, and Boro Park residents need only visit the BPJCC offices or call to arrange a visit. The visitations will also include helpful tips on how to make contingency plans in the event of a fire.

The National Fire Protection Association (NFPA) has estimated that, nationally, the risk of dying in a home fire is cut in half when there’s a working smoke alarm present. In New York City, the FDNY’s Bureau of Fire Investigations has determined that up to 70 percent of fire deaths in recent years have occurred in residences where there was no working smoke alarm — either with no alarm present, or with missing or dead batteries in a device. On average, seven people die from home fires and 36 suffer injuries every day in the U.S.

Community Board 12 Chairman Yidel Perlstein brought a heartfelt message from Councilman-elect of the 44th District Kalman Yeger, who greatly wished to attend the event but was unable, due to the election celebrations. The local fire departments were strongly represented as well.

Following the event, members in the media in attendance were ushered to a nearby home where they watched a demonstration of the fire safety visits and smoke detectors installations.