Regional ANALYSIS: With de Blasio’s Breakout Victory, is the White House Next?
Regional 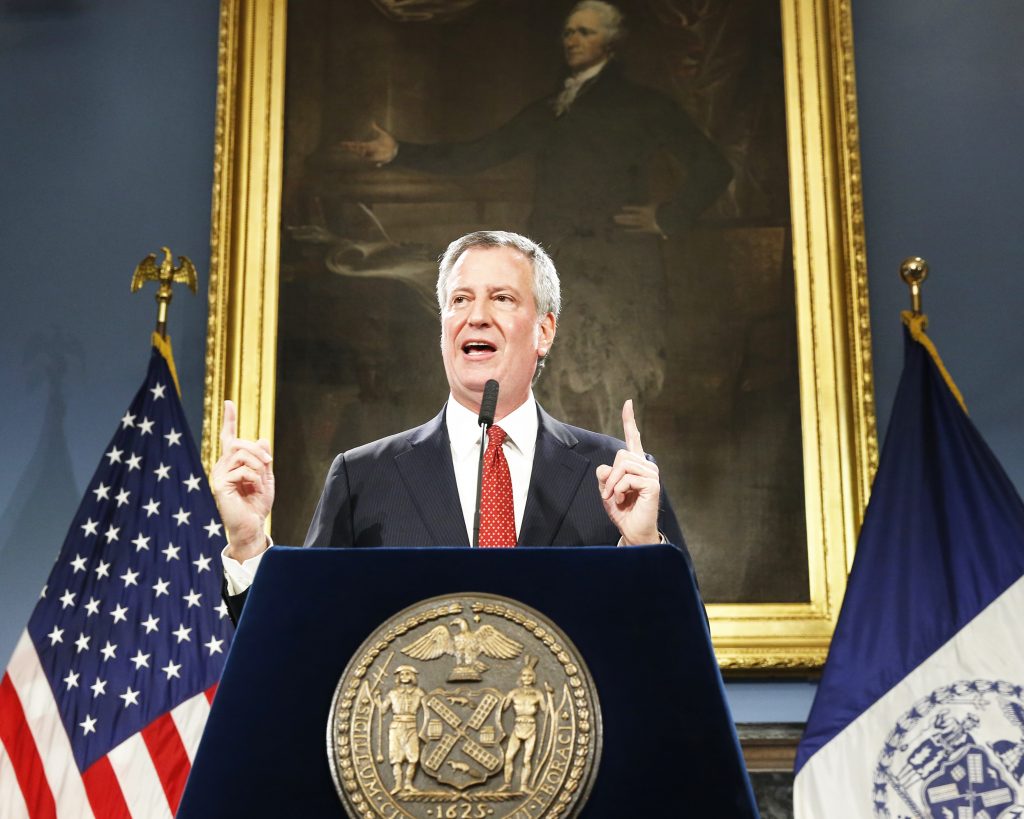 Is Mayor Bill de Blasio planning on running for president?

In an interview with last month, the Democratic mayor of New York offered up to Hamodia an interesting take which may be looked at in retrospect as the first hint of his future plans.

Asked about his support in the Orthodox community which has largely voted for President Trump, de Blasio suggested national Democrats would do well by copying his model.

With de Blasio’s avalanching the election Tuesday by taking 66 percent of the vote, comes the question — was the mayor referring to other Democrats thinking of running for the White House or was he perhaps hinting at his own prospects?

On paper, the mayor has perhaps a flawless progressive report card. He gets an A+ for his rollout of free prekindergarten, has made income inequality an integral part of his governance, and championed affordable housing projects. He fought with Gov. Andrew Cuomo for who could appear to be the angrier foe of the Trump. What’s to stop him from taking those successes on the road to DC?

If not the presidency, there have been talks of de Blasio directly challenging Cuomo for the governor’s mansion next year. There are two problems with that.

Firstly, liberals who had been upset at the governor’s moderate views are now happy with his complete transformation into a fireball progressive who now hobnobs with Bernie Sanders, Nancy Pelosi and Chuck Schumer (another Johnny come lately progressive).

Secondly, the mayor has lost badly every single political battle he has picked with Cuomo. The governor seems to almost delight in thrashing de Blasio, and there’s no reason to believe he would not emerge victorious in a primary. That, in the opinion of many pundits, may spark the end of de Blasio’s political career.

So what about the next four years? Putting aside the distraction if de Blasio decides to run for something else, he would have a hard time getting his agenda through. Much of what he wanted to accomplish was done in his first term, when he had a compliant city council, comptroller and public advocate. What he needed Albany for will still not be achieved — his enemies are still in office, Cuomo is near assured to win a third term, and the Republicans still control the state Senate.

His two marque campaign proposals — rolling out free nursery for the city’s 3-year-olds and his Robin Hood plan of taxing “the wealthy” and transferring the money to the poor to get free bus passes — are dead on arrival. His plan to tax plastic bags will either be rejected by Albany in February or approved but with Cuomo taking the credit.

And on the back burner of all that is this: term limits will make him a lame duck very quickly. Potential mayoral aspirants will not be keen on embracing his policies, or at least not when fewer than 25 percent came out to vote for him. The mayor’s legacy depends on whether the city endures an economic downturn, putting his high-spending budgets under the spotlight, or if police-minority relations remain calm.

But, hey, de Blasio has exceeded expectations in the past. He may still make the next four years productive for city residents.

One area to keep a sharp look at — the race for council speaker.

With an overwhelming majority of Democrats in the city council, laws are basically cooked up in private negotiations with the mayor and the council speaker, and then presented as a fait accompli to lawmakers. They usually take it. Under Speaker Melissa Mark-Viverito, the city has become a far-left bastion of liberalism — will the next speaker continue that? Will he or she allow more input to individual councilmembers?

Some names on the list of potential speakers are downright unfriendly to the community. Others are neutral, while at least two would be welcome. Mark Levine of Washington Heights, the chairman of the council’s Jewish Caucus, has shown an interest in how he can help the Orthodox community, while others such as Donavan Richards of Far Rockaway and Jumaane Williams of Flatbush have a significant Jewish constituency.

The race for mayor is very important. But the campaign for leader of the council, which began in earnest Wednesday, may prove no less weighty.