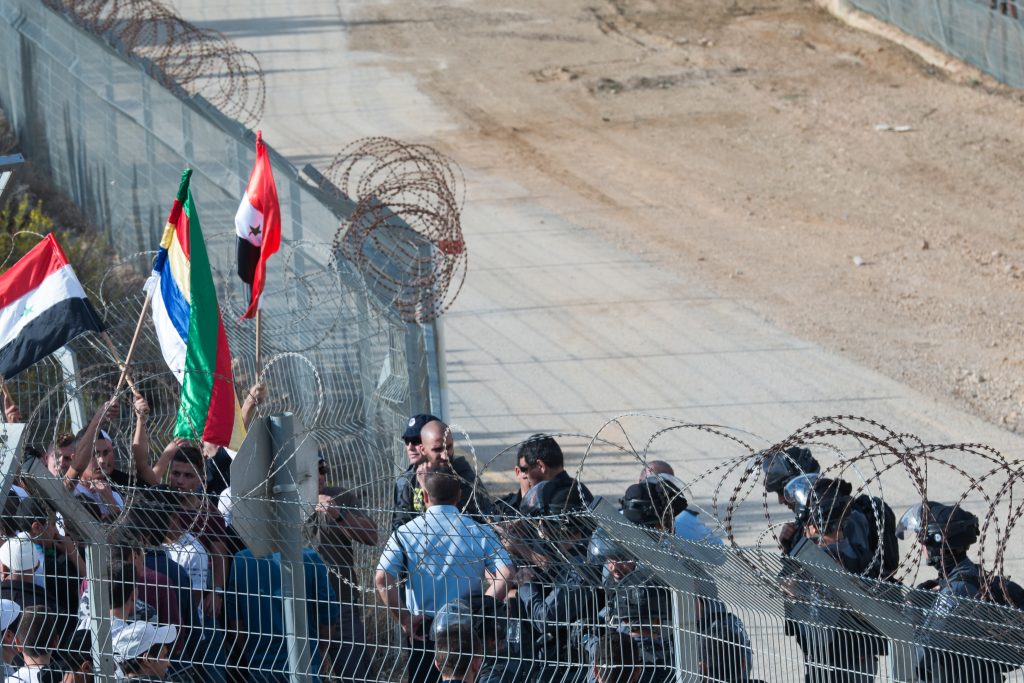 Police on Tuesday arrested seven residents of the Golan villages of Majdal a-Shams and Kinia. The seven are accused of breaking through the Golan border fence in an attempt to assist residents of the village of Khader, in Syria, who were fighting Syrian rebel groups associated with al-Qaida.

The incident occurred Friday afternoon, as hundreds of Druze in Khader beat back Syrian rebel groups that had attempted to take the village, which lies right on the border with Israel. They were assisted by units of the Syrian army. Israeli Druze broke through the border fence in an attempt to help their compatriots in the battle.

The Israeli Druze who broke through the fence did so in response to a major battle that was being waged Friday morning in Khader, where earlier nine people had been killed and 23 injured when a car bomb exploded. That terror act proved to be the opening for a gun battle between Khader residents and Syrian army troops, and Syrian rebel groups from the Nusra front. One Israeli Druze was injured when gunfire crossed the border fence, hitting a protester who had gathered near the border with hundreds of other Druze to show solidarity with residents of Khader.

The seven arrested Tuesday include two minors. They are accused of vandalism, rioting, and attacking police officers who sought to restrain them. Police said in a statement that they viewed the incident as a “serious disorder that had the potential to endanger the lives of soldiers and civilians.”

“Israel Police will fully prosecute those who break the law and upset the public order, and will continue to cooperate with the security forces to ensure security for all Israelis.”

In an unusual statement Friday, the IDF said that it “was prepared to assist residents of Khader to prevent occupation” by the rebel groups, “as part of our commitment to the Druze population. Accusations that Israel is assisting these Jihadist rebel groups are unfounded.” Israeli media reported that Meir Ben-Shabbat, a top security official in the government, had informed Druze leaders that Israel would not allow the rebel groups to take over the village. In a statement, Prime Minister Binyamin Netanyahu said that “we are constantly watching our borders, both north and south, in order to ensure security. And we also seek to protect our Druze brothers.”