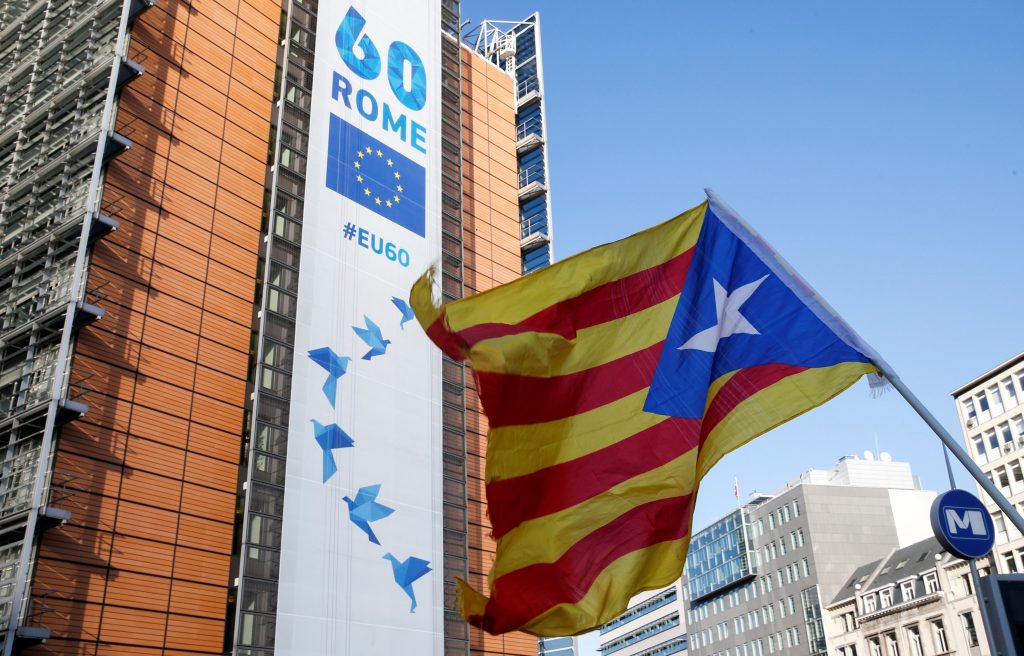 Ousted Catalan president Carles Puigdemont, who wants to lead a pro-independence coalition of political forces in an upcoming regional election, criticized on Tuesday the passivity of European politicians in denouncing the prosecution of dismissed secessionist officials.

In an interview Tuesday in Brussels with Catalan public radio, the separatist leader says there is an “absolute disconnect between the interests of the people and the European elites” and that Catalonia’s problem is an “issue of human rights that requires maximum attention.”

Puigdemont is fighting extradition to Spain, where other members of the ousted Cabinet have been sent to jail while awaiting the results of a probe for allegedly implementing a strategy to secede from Spain.

Catalan independence is now the second cause of concern for Spaniards, behind unemployment and ahead of corruption, according to the latest government-run poll. Before the banned Oct. 1 independence referendum that deepened the political crisis, the issue was only ninth in the ranking of concerns by the CIS survey.

Spanish central authorities are now in direct control of the northeastern region, where an early election on Dec. 21 is shaping into a tight race between separatist and pro-union forces.

The civil society group that spearheaded the Catalan endeavor for secession from Spain on Tuesday called for the region’s separatist political parties to run in a “unified pro-independence ticket.” In a statement, Assemblea Nacionál Catalana said such a joint coalition should include jailed separatist activists and the members of the deposed Catalan Cabinet as candidates.

The parties have until midnight Tuesday to register an interest in forming coalitions.

But a repetition of the ousted ruling coalition of the center-right PDeCAT and the left republican ERC that also appeals to the anti-establishment CUP party seems unlikely before the deadline expires.

PDeCAT wants Puigdemont to lead a hypothetical coalition, while ERC says it will only agree if deposed and jailed Vice President Oriol Junqueras heads a ticket supported by the CUP and even far-left non-nationalists.

“We don’t have any other alternative but to run all of us together,” Puigdemont said in a tweet.

A recent poll by the Barcelona-based La Vanguardia newspaper predicted that the three pro-secession parties would win between 66 and 69 seats in December. Sixty-eight seats are needed for a majority.

Pro-secession parties held a slim majority of 72 of 132 seats in the Catalan Parliament before it was dissolved by Spanish authorities after lawmakers passed a declaration of independence on Oct. 27.

The central government also removed Puigdemont’s Cabinet and called for a snap election to replace them.

Catalonia’s opposition leader Inés Arrimadas said Tuesday she hoped that disillusionment among pro-independence supporters would help her Ciutadans (Citizens) party and other pro-Spanish unity groups to band together and oust the pro-secessionists.

Arrimadas, 36, said secessionist parties will have no credibility if they again promise a bright future for Catalonia’s independence.

She said no country recognized their secession declaration on Oct. 27. The EU insists an independent Catalonia will be expelled and thousands of businesses have since moved their headquarters from the region.

Arrimadas, whose party holds 25 seats in the 135-deputy Catalan parliament, said “demoralization” among the pro-independence camp and mobilization of unionist parties could help swing the balance in Spain’s favor.

Meanwhile, judges are also gauging possible rebellion charges against the former Catalan separatist officials and lawmakers who made the vote possible. Eight former Cabinet members including Junqueras have been jailed, one of them released on bail and five more, including Puigdemont, are in Belgium where they plan to campaign while fighting extradition to Spain.

Six lawmakers, including the regional parliament’s speaker, Carme Forcadell, could also be sent to jail as soon as Thursday, after they testify before a Supreme Court judge on a similar probe. They face possible charges of rebellion, sedition and embezzlement, which can be punished with up to 30 years in prison under Spanish laws.

Catalan separatist parties are planning to include some of the officials in ballots as a way to draw more attention to a situation that they consider unjust. Lawyers are also arguing that the officials should be spared jail before trial because running for a parliamentary seat means that they have no intention of fleeing the country.