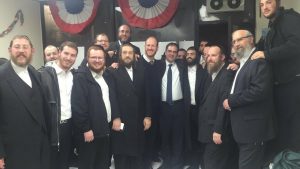 Touting his 20 years in public service, along with a promise to continue the policies of the incumbent, Kalman Yeger on Tuesday swept the New York City Council seat being vacated by the retiring Councilman David Greenfield.

Mr. Yeger, a lawyer by training and a longtime community board member, took the district encompassing Boro Park and Midwood by about 69 percent. He defeated opponents Yoni Hikind and Heshy Tischler following a hard-fought race that electrified the community.

Mr. Hikind took 27 percent of the vote, with Mr. Tischler and write-ins getting the other 4 percent.

Mr. Yeger will take office on Jan. 1, when Mr. Greenfield will leave the Council to head the Met Council, one of the city’s largest Jewish charities.

In a short interview with Hamodia late Tuesday, Mr. Yeger said he would work to unite the district after the ardor of the campaign.

“It is an honor and a privilege,” he said. “This is an incredible, incredible community and it is a great honor to have this opportunity to represent such a great community. I am going to work hard — it is a promise I made every single day when I was talking to people in the streets and I am going to keep that promise.”

“The promise starts tomorrow,” he said. “Tomorrow is the beginning of the next four years.”

Mr. Yeger added that he wants to “prove” to people who voted for his opponents that he will serve everyone in the district.

“The achdus begins right now,” he said. “Because that is what we need in our community.”