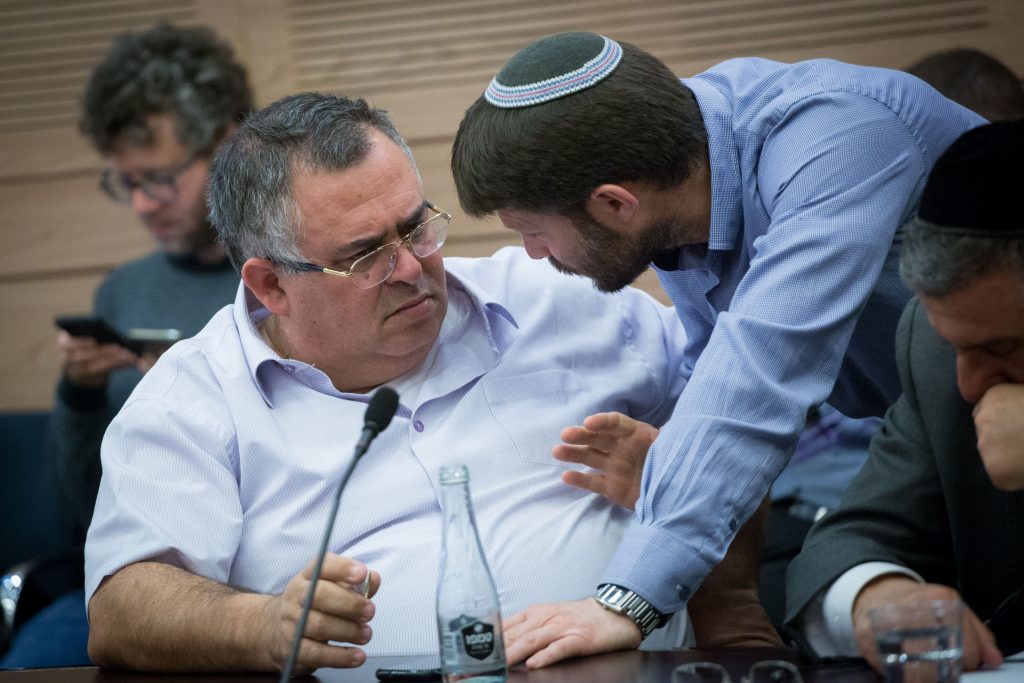 The Likud and Jewish Home were at war on Tuesday over a measure to empty the coffers of the Jewish National Fund into state accounts, a transfer amounting to hundreds of millions of dollars.

The Cabinet approved a bill to transfer some 2 billion shekels ($570 million), the equivalent of 80 percent of the JNF annual income; the plan ran into trouble in the Knesset, where Jewish Home MK’s opposed the bill backed by Prime Minister Binyamin Netanyahu’s Likud.

Coalition chairman MK David Bitan (Likud) was reportedly fuming over what he saw as the obstructionism of MK Bezalel Smotrich in particular. Smotrich, who is against the bill, sits on the Finance Committee, where he could impede its progress.

Bitan demanded of Jewish Home that Smotrich be replaced on the committee “within the hour” because he was “creating obstacles for the coalition.”

But Jewish Home faction leader MK Shuli Moalem-Refaeli stoutly refused his demand. “The Jewish Home faction will decide who will represent it in [Knesset] committees,” she said in a statement. “We also decide for ourselves which issues we support, and which we do not. I have no intention of removing Bezalel from his position on the Finance Committee.”

Smotrich denounced the transfer as a power grab.

“[Finance Minister Moshe] Kahlon is liquidating the JNF and disposing its revenues to fund his reelection. The government of Israel tramples on agreements that it signed with the JNF only in the previous budget and broadcasts that can’t be relied upon to fulfill its obligations.

“There is no logic in this grab. After KKL-JNF fulfilled its commitment and transferred NIS 2.2 billion to the state’s coffers in the previous budget, the treasury’s appetite grew. This law does violence to the JNF and uses money raised from the Jewish people throughout the generations for narrow political needs.

“I can’t understand coalition member’s eagerness, who are prepared in a lightning move to give the Kulanu party billions of shekels, while dealing a fatal blow to the JNF,” Smotrich added. “The KKL-JNF board of directors yesterday approved the transfer of NIS 1 billion to the state budget for 2018. The debate over another billion is for 2019, and it’s not clear what the treasury is anxious to bring the Knesset today with such urgency when it comes to the 2019 budget.”

The JNF, a nonprofit quasi-governmental organization that focuses on land reclamation, reforestation, and development of periphery communities, has recently come under unprecedented criticism.

In January, State Comptroller Joseph Shapira published a report — the first ever from his office concerning the JNF — alleging gross mismanagement. It cited conflicts of interest and lack of oversight at the agency’s Land Development Administration.

The organization, the report found, over a period of 15 months between August 2014 and October 2015 spent just a third of its revenue on public projects to develop land while “43 percent [of NIS 3.5 billion] were used to expand its own financial assets.”

The comptroller recommended that “given the severe… discrepancies that surfaced with regard to the way [the Land Development Administration] operates, there is an urgent need to expand government oversight into the [JNF’s] other operations.”

The Finance Ministry stated that the JNF does not fulfill agreements according to which it will transfer NIS 2 billion to the state budget in the next two years, and therefore it must be compelled to do so by law.

All the Knesset factions reportedly support Tuesday’s cabinet decision, except for Jewish Home and Zionist Camp.