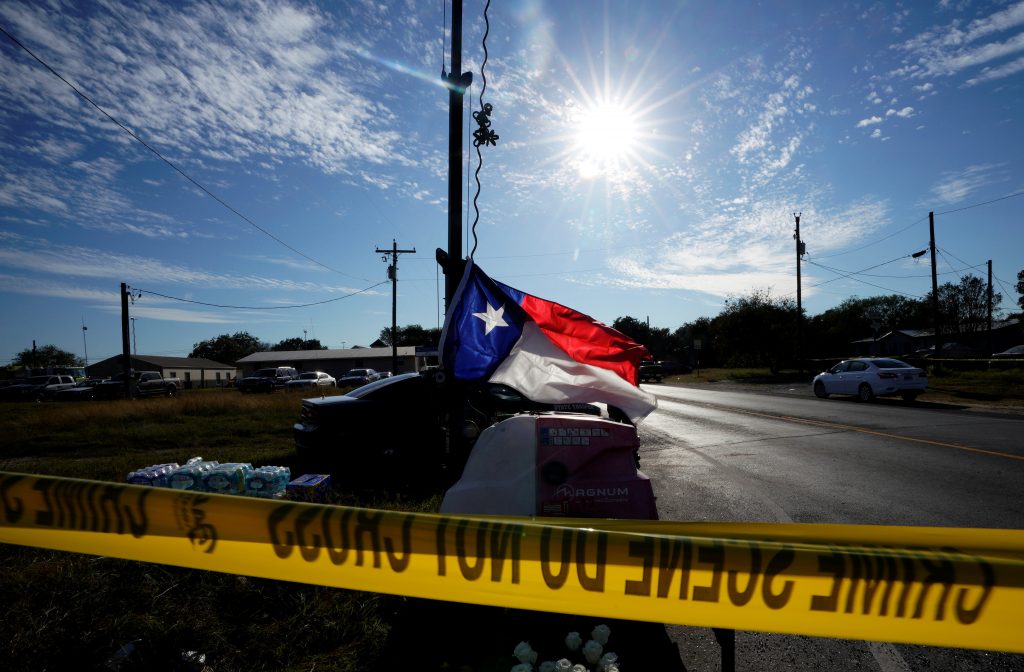 The man who carried out one of the deadliest U.S. mass shootings was able to buy guns legally from a sporting goods store because a prior domestic violence conviction was never put into an FBI database used in background checks, officials said.

Devin Kelley, the gunman in Sunday’s massacre at a church in rural southeastern Texas, was convicted by court-martial of domestic violence while serving in the U.S. Air Force in 2012, according to the Pentagon.

Authorities put the death toll at 26. The attack ranks as the fifth-deadliest by a single gunman in U.S. history.

The dead ranged in age from 18 months to 77 years. Twenty others were wounded, with 10 still in critical condition late on Monday, officials said.

Kelley died of a self-inflicted gunshot wound in his getaway vehicle, where authorities found two handguns, Freeman Martin, a spokesman for the state Department of Public Safety, told a news conference on Monday night.

Kelley was also wounded by a resident who heard the gunshot, grabbed his own rifle and raced to the church, shooting the 26-year-old twice as he fled.

The massacre, the deadliest by a sole gunman in Texas history, stirred an ongoing debate over gun ownership, which is protected by the Second Amendment of the Constitution. Guns are part of the fabric of life in rural areas.

President Donald Trump on an Asia trip told reporters he believed stricter reviews of gun purchases would have had no effect on Sunday’s massacre.

“There would have been no difference,” Trump said while on a visit to South Korea. He added that stricter gun laws might have prevented the man who shot Kelley from acting as he did.

“You would have had hundreds more dead,” Trump said. “So that’s the way I feel about it. Not going to help.”

The Air Force opened an inquiry into how it handled the former airman’s criminal record, and the Defense Department has requested a review by its inspector general to ensure that other cases “have been reported correctly,” Pentagon officials said.

Firearms experts said the case involving Kelley, who spent a year in military detention before his bad-conduct discharge from the Air Force in 2014, has exposed a previously unnoticed weak link in the system of background checks.

It is illegal under federal law to sell a gun to someone who has been convicted of a crime involving domestic violence against a spouse or child.

A sporting goods retail outlet said Kelley passed background checks when he bought a gun in 2016 and a second firearm this year.

Federal databases did not contain any information that would have barred Kelley from legally buying any of three weapons police recovered from their investigation, said Christopher Combs, special agent in charge of the FBI office in San Antonio.