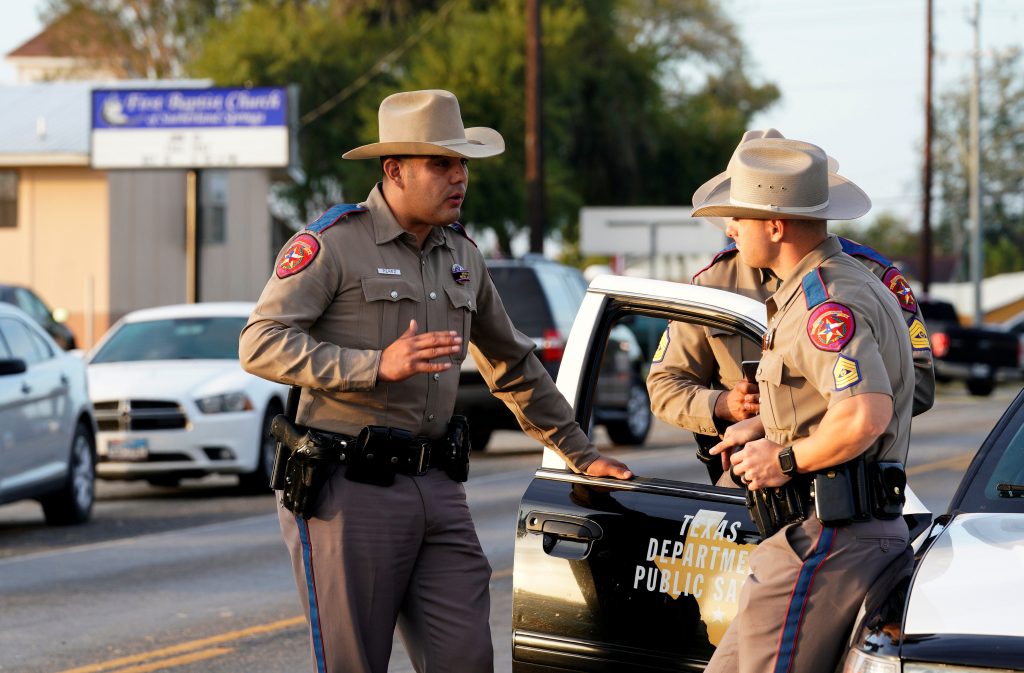 A man thrown out of the U.S. Air Force shot and killed 26 people in a rural Texas church that his in-laws frequented before fatally shooting himself, officials said, in the latest in a string of U.S. mass shootings.

After he left the church, two local residents, at least one of whom was armed, chased him in their vehicles and exchanged gunfire, and Kelley crashed his car and shot himself to death, Wilson County Sheriff Joe Tackitt told CBS News in an interview on Monday morning.

“At this time we believe that he had a self-inflicted gunshot wound,” Tackitt said. He later told CNN, “We know that his ex in-laws or in-laws came to church here from time to time … They were not here [Sunday].”

The attack came a little more than a month after a gunman killed 58 people in Las Vegas in the deadliest shooting by a sole gunman in U.S. history.

The initial death toll matched the number of dead in the December 2012 massacre at Sandy Hook Elementary School in Newtown, Connecticut, where a man shot and killed 26 children and educators. Those attacks now stand as the fourth deadliest in the United States.

Texas Governor Greg Abbott told CBS there was evidence that Kelley had mental health problems and that he had been denied a Texas gun permit.

“It’s clear this is a person who had violent tendencies, who had some challenges, and someone who was a powder keg, seeming waiting to go off,” Abbott said.

Abbott and other Republican leaders were quick to say that the attack did not influence their support of gun ownership by U.S. citizens – the right to bear arms protected under the Second Amendment of the Constitution.

The victims in Sutherland Springs, a community of fewer than 400 people, located about 40 miles east of San Antonio, included the 14-year-old daughter of church pastor Frank Pomeroy, the family told several media stations.

In rural areas like Sutherland Springs, gun ownership is a part of life and the state’s Republican leaders for years have balked at gun control, arguing that more firearms among responsible owners make the state safer.

At the suspect’s home located in an isolated area of New Braunfels, about 35 miles north of Sutherland Springs, a Comal County Sheriff vehicle blocked the entrance. A “beware of dog” sign was affixed to the gate where a dented mailbox bears the address.

Kelley served in the Logistics Readiness unit at Holloman Air Force Base in New Mexico from 2010 until his discharge in 2014, according to the U.S. Air Force.

Kelley was court-martialed in 2012 on charges of assault, and given a bad-conduct discharge, confinement for 12 months and a reduction in rank, Air Force spokeswoman Ann Stefanek said.