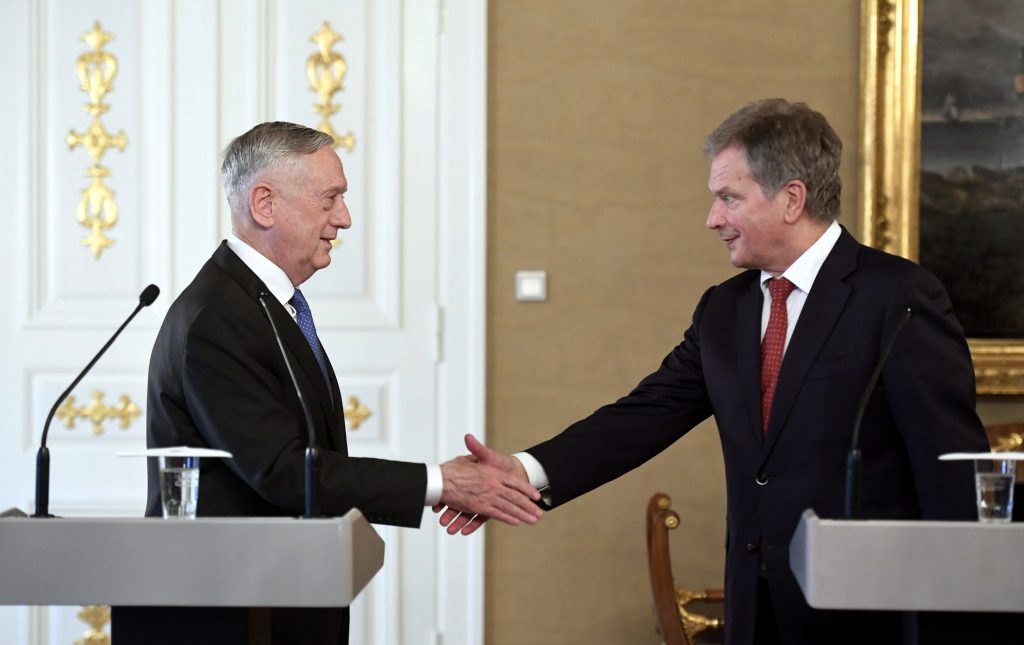 Defense Secretary Jim Mattis appeared at the presidential palace here Monday, praising a country that once clashed with Soviet forces to preserve its independence for now establishing a new center dedicated to countering the unconventional forms of warfare that Russia is fond of using.

Mattis called the European Center of Excellence for Countering Hybrid Threats that Finland established earlier this year “an institution fit for our times.” He did not mention Russia, but Finland shares an 830-mile border with Russia and pays keen attention to Moscow’s actions.

Hybrid warfare can include conventional combat, but it often seeks to achieve goals through other means, by targeting computer networks, for example, manipulating people through propaganda, or using clandestine operations to avoid retribution for aggressive actions. Russia has been accused of using all three in recent years.

The center has participation from Finland, Estonia, France, Germany, Latvia, Lithuania, Norway, Poland, Spain, Sweden, Britain and the United States. European Union countries and those in the North Atlantic Treaty Organization are able to join.

Mattis, appearing alongside Finnish President Sauli Niinisto, said the United States sees a lot to admire in Finland, including its peacekeeping operations, stance on human rights and involvement in arms control. It also has contributed to the coalition to counter the Islamic State.

“I think that your tactfully skillful and ethically sound troops have brought courage and competence to the battlefield against terrorism in the same manner in which your country has brought compassion to the humanitarian fields on so many occasions,” Mattis said.

Mattis’ stop in Finland comes during a trip in which he also plans to meet with NATO allies in Brussels and with Britain’s new defense secretary, Gavin Williamson, in London. Williamson replaced Michael Fallon, who unexpectedly resigned from the post last week. Mattis had planned to meet with Fallon but instead will meet his successor.

On Tuesday, Mattis will meet in Helsinki with senior officials from Finland and other nations who are involved in what is known as the Northern Group, a gathering of nations that includes Britain, Poland, Germany, the Netherlands, the Nordic states and the Baltic states.

Mattis, speaking on the flight from Washington to Helsinki, said the visit is an opportunity to show that the United States stands by friendly nations in Europe “if any nation, including Russia, seeks to undermine the rules-based international order.”

Finland, he noted, has “had to fight to hang on to their freedom.”

The country declared its independence from Russia 100 years ago next month, but it was invaded by the Soviet Union in 1939, after it signed a neutrality pact with Nazi Germany that divided northern Europe into spheres of influence. Finland repelled the assault in a bloody fight and preserved its independence, but it ceded a fraction of its territory along its eastern flank.