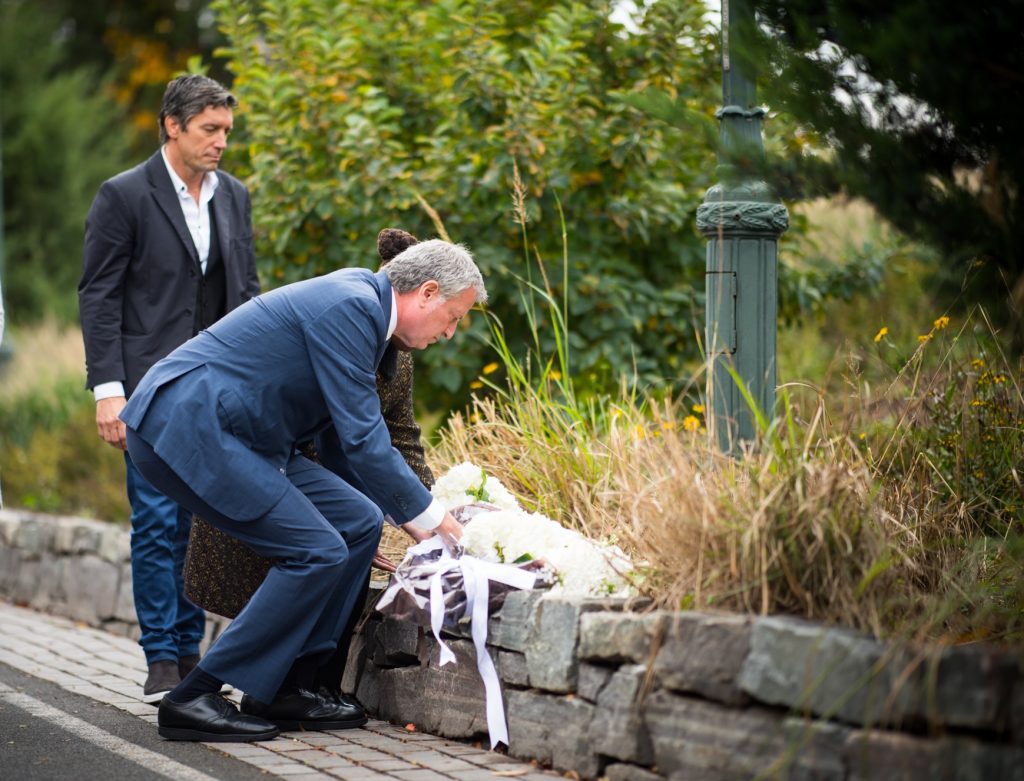 The president of Argentina on Monday visited the site of last week’s New York City terrorist attack where eight people died, including five Argentines, and said such tragedies unite people of good will around the world.

“We lament that we have to meet under these circumstances, but I am happy that this gives us the chance to reinforce the love and the work we do altogether,” President Mauricio Macri, speaking in Spanish, told Argentine officials who attended an event to remember victims of the attack on a bike path in Manhattan.

Mayor Bill de Blasio and his wife, Chirlane McCray, stood by his side and paid tribute by placing white flowers at the path where an Uzbek Islamist steered a rented truck and sped down the path toward the World Trade Center, striking cyclists and pedestrians.

Macri and his wife, Juliana Awada, also placed white flowers at the site and hugged Guillermo Banchini, an Argentine who survived the attack, and Mariana Dagatti, the wife of attack survivor Martin Marro.

Banchini and Marro belonged to a group of 10 friends from the Latin American country who came to the city last week to celebrate the 30th anniversary of their high school graduation. Their story of longtime friendship captivated many people, with media worldwide publishing a photo of most of them at the airport in Rosario, Argentina, looking giddy shortly before boarding their flight to the U.S.

Macri stressed the importance of nations coordinating better their fight against terrorism.

“We have to understand that this permanent aggression that we experience in the 21st century can’t be confronted with tools from the 20th century,” he said.

De Blasio said New York City will always welcome visitors from all over the world and won’t forget the victims of the attack. “Mr. President, we will forever remember them as New Yorkers,” he told Macri.

For three decades, they had kept close through marriages, trips and jobs. Some had played soccer and volleyball together as children, and as grown-ups, they would meet for traditional barbecues known as asados.

“These were known people in our city who were joined by a strong affection bond, which is highly valued by our community,” said Gustavo Zignago, a Rosario official. “The idea is to be with them until the very end and to give them the best farewell.”