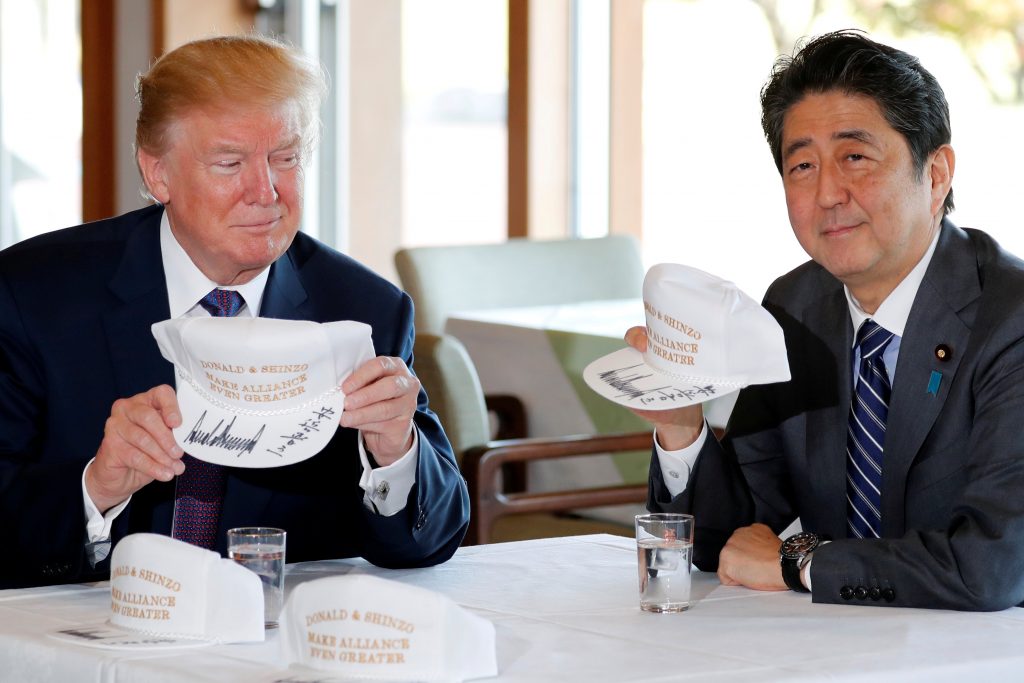 Japanese Prime Minister Shinzo Abe welcomed President Donald Trump to Japan Sunday with an effusive display of friendship that, in the days ahead, will give way to high-stakes diplomacy. The two leaders, who have struck up an unlikely but easy rapport, shared a casual lunch and played nine holes at the Kasumigaseki Country Club, joined by professional golfer Hideki Matsuyama.

The low-key agenda was a prelude to the formal talks, a press conference and state dinner planned in Tokyo Monday. Abe will be looking for a united front against North Korea and reassurances that the U.S. will stand by its treaty obligations to defend Japan if attacked.

Eager to forge a bond with Tokyo’s crucial ally, Abe was one of the first world leaders to court President-elect Trump. He was the first to call Trump after the election, and rushed to New York days later to meet the president-elect and present him with a pricey, gold Honma golf driver. The two men also met on the sidelines of an international summit in Italy this spring and Trump hosted Abe in Florida. White House officials said Trump has spoken with Abe by phone more than any world leader, aside from British Prime Minister Theresa May.

That bond was clear on Sunday.

“The relationship is really extraordinary. We like each other and our countries like each other,” Trump said Sunday night before dinner with Abe. “And I don’t think we’ve ever been closer to Japan than we are right now.”

Abe told reporters after the golf session that the two could talk frankly in a relaxed atmosphere while out on the course. He said they were able to “carry out in depth discussion, at times touching on various difficult issues.” A senior White House official, briefing reporters on condition of anonymity, said the pair had discussed trade and North Korea — but didn’t keep score.

From the time Marine One landed on the Kasumigaseki Country Club’s driving range, Abe rolled out little touches to make Trump feel welcome. He presented a hat that had a version of Trump’s campaign theme, this time reading “Donald and Shinzo: Make Alliance Even Greater.”

When Trump hosted Abe in Palm Beach earlier this year, they played at one of Trump’s Florida golf courses.

“From the point of view of Abe administration, the personal chemistry that exists between the two leaders is seen as an asset,” said Mireya Sollis, chair in Japan Studies for the Brookings Center for East Asia Policy Studies. She said that the Japanese believe it is already “seeing it pay off,” including when Trump agreed to meet with the families of Japanese citizens kidnapped by the North Korean regime, an important issue for Tokyo.

Ever since Saudi Arabia delivered a lavish welcome on Trump’s first international trip, leaders have tried to outdo themselves to impress the president, who has proven susceptible to flattery.

Before the game, Trump delivered a speech in which he hailed Japan as a “crucial ally” and warned adversaries not to test America’s resolve.

“Japan is a treasured partner and crucial ally of the United States and today we thank them for welcoming us and for decades of wonderful friendship between our two nations,” Trump told American and Japanese service members at Yokota Air Base on the outskirts of Tokyo.

Though Trump did not mention North Korea by name during the speech, the spectre of its weapons program will loom large throughout Trump’s five-nation Asia trip. The president warned of the consequences of crossing what he called the “most fearsome fighting force in the history of our world.”

“Together with our allies, America’s warriors are prepared to defend our nation using the full range of our unmatched capabilities. No one — no dictator, no regime and no nation — should underestimate, ever, American resolve,” he told the troops.

And while there is worry in the region about Trump’s unpredictable response to the threat posed by Kim Jong Un, Trump made clear he did not intend to tone down his bellicose rhetoric — including dubbing Kim Jong Un as “Little Rocket Man” — even while in an Asian capital within reach of the North Korea dictator’s missiles.

“There’s been 25 years of total weakness, so we are taking a very much different approach,” he said, speaking to reporters on Air Force One.

Trump will also meet with Russian President Vladimir Putin on the sidelines of an upcoming summit in Vietnam.

The easy rapport with Japan could be strained if Trump takes an aggressive approach on trade or the two men disagree on how best to approach the threat looming in Pyongyang. During his campaign, Trump suggested Japan should acquire its own nuclear weapons to defend itself, hinted the U.S. might not come to the nation’s defense, and accused Japan of “killing us” on trade. He has dropped that antagonist language almost entirely since the election, but tensions remain.

Scott Seaman, a director for Asia of the Eurasia Group, a political risk consultant organization, noted: “everything is fine with Trump until you tell him no. So far, Abe hasn’t told him no.”