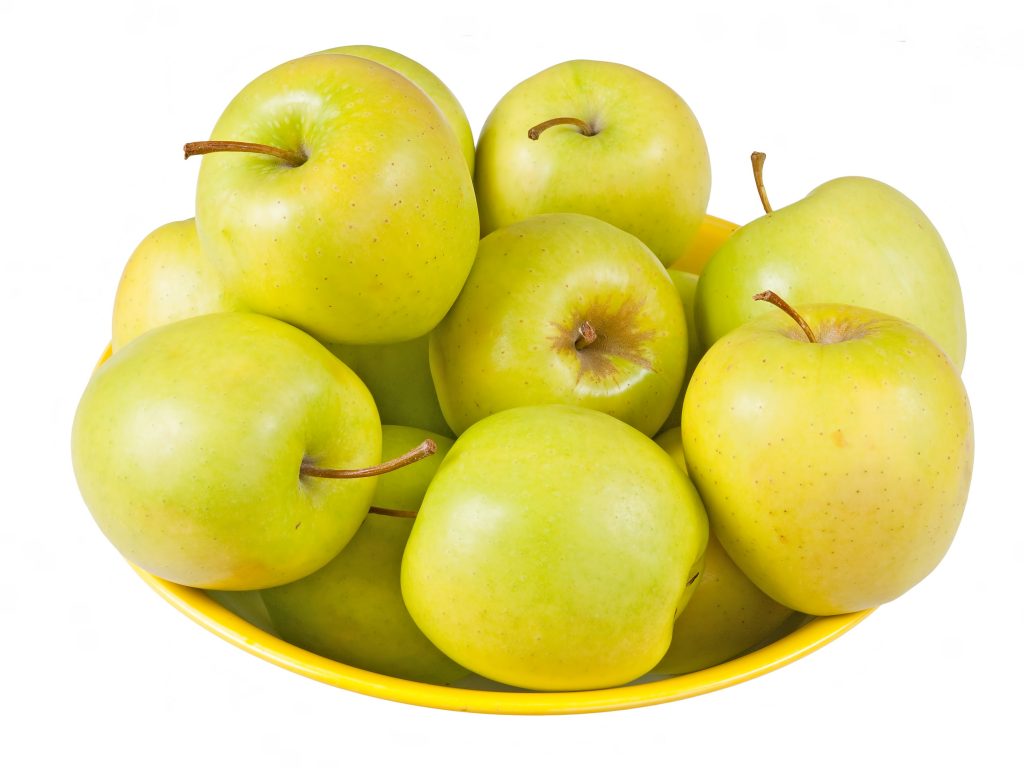 The first commercial harvest of GMO Golden Delicious apples will be going from Washington state orchards to around 400 Midwestern grocery stores in early November. They’ll be sold sliced up in 10-ounce grab bags, and because they’re modified, they take much longer to brown when exposed to the air.

While GMO crops are the mainstream for U.S. commodities like corn and soybeans, that isn’t the case with fruits. There’s little financial incentive to develop and commercialize modified fruits because of the costs of changing food rules and the risks of consumer pushback, said Kevin Folta, a horticulture professor at the University of Florida, Gainesville. Papayas from Hawaii, engineered to resist a deadly virus, are the only other biotech fruit at supermarkets.

There’s no evidence that genetically modified foods cause any health problems, but the technology is still controversial, with some consumers willing to pay more for food with GMO-free labeling.

But Summerland, British Columbia-based Okanagan Specialty Fruits is making a bet that the convenience of non-browning apples will make up for consumer concerns. The company harvested about 50 metric tons of the so-called Arctic apples, the moniker given to the GMO crop. That’s enough to supply the supermarkets for around two months, President Neal Carter said by email. The long-lasting, fresh-cut fruits will especially appeal to parents with busy lifestyles, and will fetch a premium in pricing, he said.

“Whatever people’s views about GMO technology and Arctic apples are, no one is disputing that increasing consumption of fresh fruits and vegetables is a healthy choice,” said Peter Hirst, a professor of horticulture at Purdue University in West Lafayette, Indiana. “If this technology leads to more people including more sliced apples in kids’ lunchboxes, that’s a good thing.”

Genetically modifying apples in particular, could be a risky wager. Because apples are seen as a quintessentially healthy product that parents provide for children, it’s a sensitive market, said Jim McFerson, professor of horticulture at Washington State University in Pullman. Some growers in the Pacific Northwest, the biggest region for U.S. production of the fruit, have felt that being the first industry to bring a GMO product into such a sensitive market could hurt the apple’s positive image, McFerson said.

Still, consumers are used to having an abundance of choices when it comes to apples, which could help the GMO Arctic apple, according to Purdue’s Hirst. While strawberries are simply strawberries to most shoppers, apples come in a multitude of varieties, many of which sell for a hefty premium, like Honeycrisps.

The GMO apple has been in the works for decades. Okanagan’s Carter and his wife Louisa founded the company in 1996, and field trials with the Arctic Apple started in 2003. The U.S. Department of Agriculture deregulated the product in 2015.

The Arctic apple’s trait is achieved by suppressing a gene that releases an enzyme that causes browning. Most GMO crops provide a benefit to growers by increasing productivity, like providing pest or weed control. But foods engineered with traits that appeal to consumers, like more vitamins, could lead to shoppers seeking out the product, Hirst said.

Biotech foods don’t need to be declared as such on labels in the U.S., so the Arctic apples won’t be marked as genetically modified. Information about how the fruit is produced will be available on a quick response, or QR, code, on the company’s website and through a toll-free telephone number.

Apple consumption in the U.S. has been stagnant for 20 years amid worsening obesity, and Okanagan’s Carter wants the Arctic apple to help revive demand by improving the fruit’s appearance. Currently, about 280 acres of Arctic apple trees are planted in Washington state, including Golden Delicious, Granny Smith and Fuji varieties. Carter anticipates increasing that number to more than 1,000 acres by 2020. The company is planning future plantings in Canada and other countries.

Some consumers tried the Arctic apples earlier this year when the company was conducting market research in six cities, and this is the first time the product will be sold in stores. More than 90 percent of the consumers that tried them said they would buy them if available in their local stores, Carter said.

“The purpose of Arctic apples is definitely to promote healthy eating, boost apple consumption and reduce food waste, no matter what your age, income, or any other factor,” Carter said.