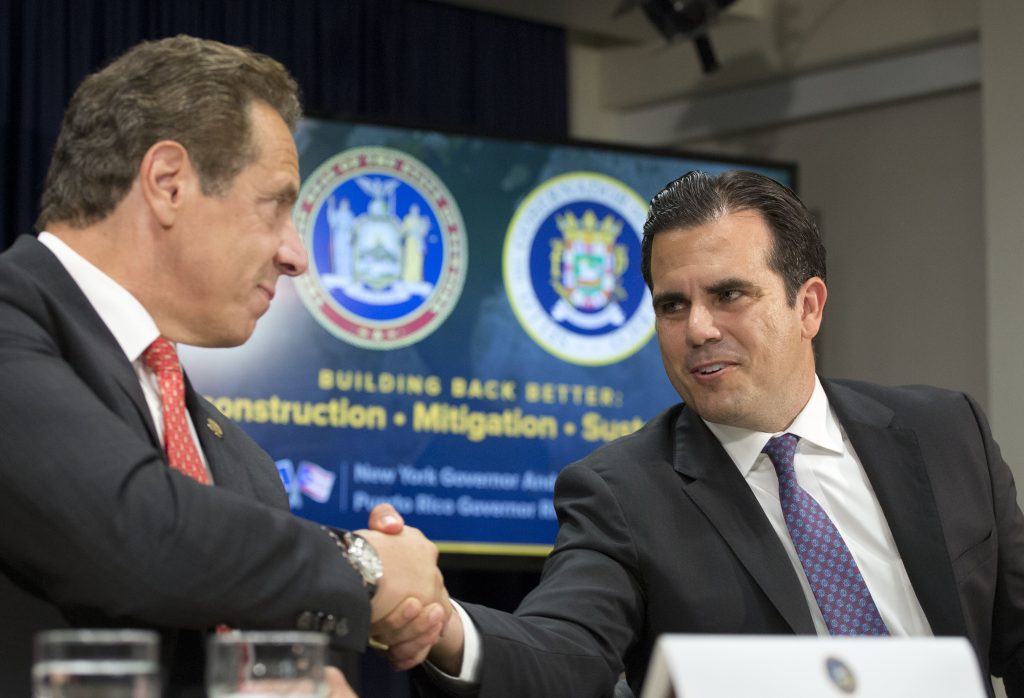 The governor of Puerto Rico traveled to New York Thursday to see how the state rebuilt following Superstorm Sandy and meet with Democratic Gov. Andrew Cuomo to discuss his island’s recovery from Hurricane Maria.

Gov. Ricardo Rossello joined Cuomo for an aerial tour of sites on Long Island impacted by the 2012 storm that were rebuilt to be more resilient to flooding. The two men then discussed additional ways New York can help the U.S. territory, and Cuomo announced the deployment of additional utility workers to assist in restoring electricity.

Rossello said he hopes Puerto Rico emerges from Maria as well as New York did after Sandy.

“Five years down the road, we can have a bigger event where we remember what the catastrophe was,” he said.

Cuomo, who has slammed the federal response to the storm, said an additional 350 utility workers and 220 utility trucks would be sent to Puerto Rico this weekend. The state already has sent hundreds of personnel and millions of pounds of supplies, and Cuomo has visited the island twice since the storm.

“It’s been 35 days,” he said at a joint press conference with Rossello. “The result is intolerable. You cannot have a situation where people don’t have water for 40 days. Just imagine if that happened in the United States. … Puerto Ricans have been treated as second class Americans.”

Considered a possible candidate for president in 2020, Cuomo stopped short of calling out President Donald Trump by name. But he said the slow response was contributing to a “humanitarian crisis.”

Federal officials have defended the recovery effort and said they will remain in Puerto Rico until the work is done.

“Our thoughts and prayers are with you after the tragic events that occurred a couple of nights ago,” he said. “We are with you. We will be with you, as you have been with us.”