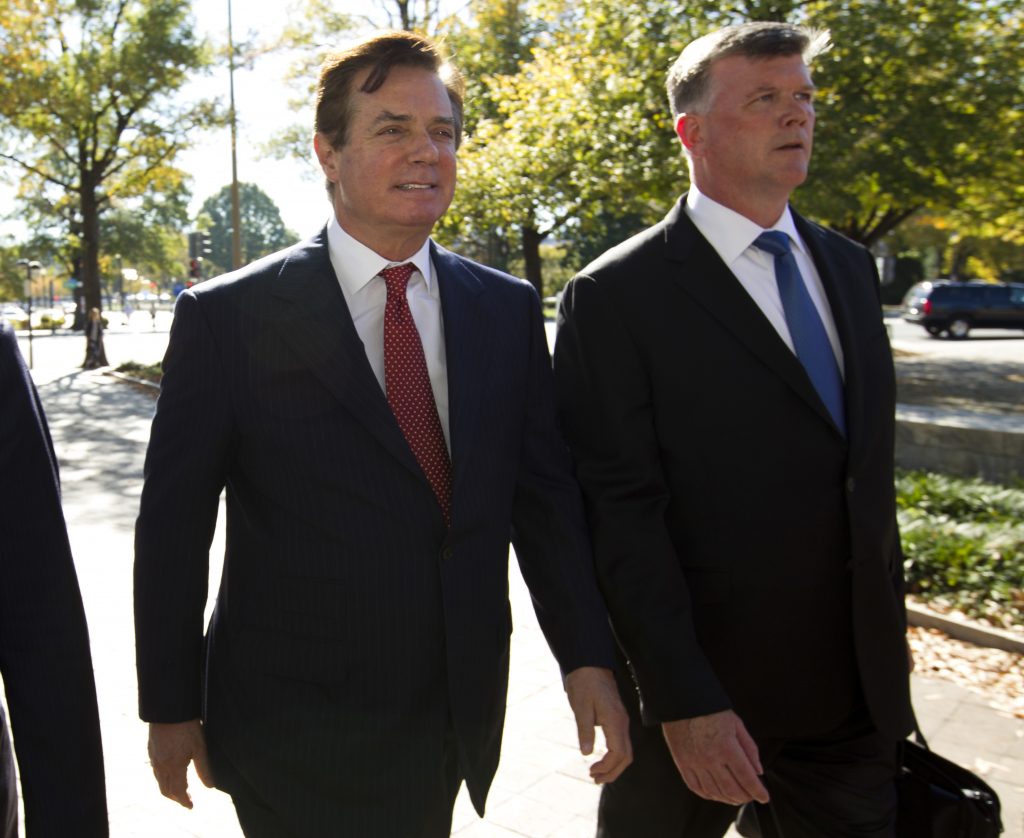 Accused of multiple financial crimes, President Donald Trump’s former campaign chairman on Thursday attacked the strength of the evidence against him, saying the case brought by special counsel Robert Mueller is “embellished.”

In a court filing Thursday, attorneys for Paul Manafort defended him as a “successful, international political consultant” who, by nature of his work on behalf of foreign political parties, was necessarily involved in international financial transactions. They say Manafort, who led Trump’s campaign for several months last year, has done nothing wrong and doesn’t pose a risk of fleeing the country.

The filing was the first volley from Manafort’s defense team, which seeks to undermine a 12-count indictment against him and longtime business associate Rick Gates. Mueller announced the indictment Monday, charging the men with money laundering and other financial crimes related to their political consulting work for Ukraine’s former ruling party.

They were placed on house arrest during a court appearance earlier this week, released on multimillion-dollar bonds. And on Thursday, both men appeared in federal court in Washington, where a judge ruled that they would remain on home confinement and electronic monitoring at least through the weekend.

Attorneys for Manafort, 68, and Gates, 45, are asking U.S. District Judge Amy Berman Jackson to release them while they await trial, saying the bonds are enough to ensure they show up for court. The judge said she would take up the matter again at a hearing Monday.

Prosecutors disclosed additional details about the wealth and international connections of Manafort and Gates in a court filing Tuesday that sought to keep them confined to their houses. The prosecutors note that Manafort has provided widely differing accounts of his assets in the past few years. In 2016 alone, he provided six different figures, ranging from $25 million to $136 million, according to the filing.

Manafort also has three passports. And prosecutors say that in March, he registered a phone and an email account using an alias. He then used that phone to travel to China, Mexico and Ecuador. The court filings do not say what alias he used.

In a response Thursday, Manafort’s attorney, Kevin Downing, countered that the passports are in his client’s name and noted that, though “it may be surprising to some, it is perfectly permissible to have more than one U.S. passport.”

He dismissed the allegation that Manafort was a flight risk, saying his client has traveled abroad and returned to the U.S., all while being well aware that he was under federal investigation and faced a possible criminal indictment.

Downing also denied that Manafort was involved in any criminal activity related to his Ukrainian work. All funds that went through offshore bank accounts were from “legal sources,” he said.

Manafort was not trying to conceal his assets, his attorney said, noting that funds originating in Ukraine and going through Cyprus ultimately arrived in the United States.

“Obviously, international funds entering the U.S. banking system, or going to U.S. vendors, are traceable and subject to U.S. process,” Downing said. “It goes without saying that in an international scheme to conceal assets, individuals generally move them offshore, not to the United States.”

The defense lawyers also challenged the inclusion in the indictment of allegations that Manafort failed to register as a foreign agent with the Justice Department. The Justice Department, they said, has brought only six criminal prosecutions under that statute since 1966 and secured only one conviction during that period.

In a separate filing, Gates’ attorney, Shanlon Wu, said his client isn’t a flight risk, poses no danger to the community and does not need to be confined to his home to ensure he won’t flee.

Describing Gates as a “devoted husband and a very involved father,” Wu asked that the judge allow his client to travel domestically as well as abroad so he can maintain his current consulting clients and attract new ones. Without the ability to travel, he won’t be able to support his wife and children, who range in age from 6 to 14 years old, Wu said.

It “is unthinkable that he would abandon his family, close friends and local community to flee to some other country, even in the face of these unproven allegations,” Wu wrote.

Also Thursday, the government filed court papers seeking to restrain Manafort from selling, drawing on or transferring a life insurance policy. Prosecutors are seeking to seize the policy, saying they believe it is the proceeds of criminal conduct.