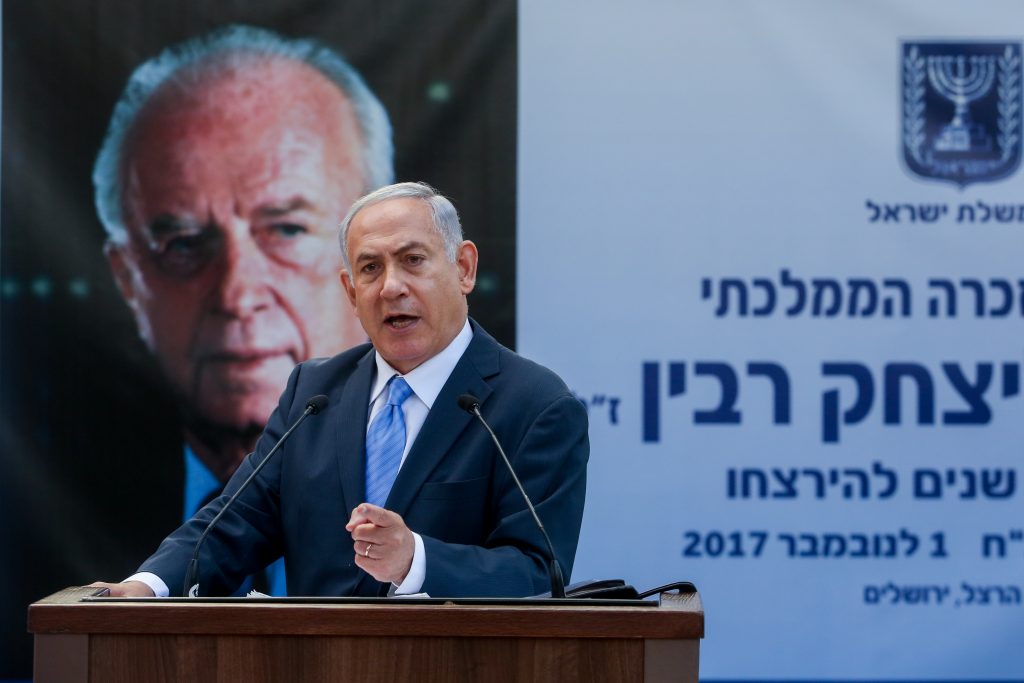 The 22nd anniversary of the assassination of Prime Minister Yitzhak Rabin in Israel on Wednesday once again stirred up painful memories and political antagonisms.

Israeli officials marked the day with speeches at Mount Hertzl Cemetery in Yerushalayim, where calls for national unity vied with thinly veiled criticism of the current prime minister.

Prime Minister Binyamin Netanyahu said the murder of Prime Minister Rabin requires a “condemnation of violence from whatever the source, especially if that violence is directed at public leaders.”

“The shocking murder has put us to a fundamental test of the danger of self-destruction and the destruction of democracy, and we are absolutely committed to the basic rule of democracy,” he said.

PM Netanyahu turned to Rabin’s son Yuval, who attacked him minutes earlier, and told him that “I understand your pain regarding all the slander against your father. Believe me, I understand that.”

“You turned to me, and I’m lifting the gloves,” he continued. “I call for national reconciliation and brotherhood. I have done it many times before, but in light of your moving call, I repeat this message with all my strength.”

“Rabin was not coddled by the High Court or by NGOs… or the media, but he did not enact legislation [referring to a bill to give a prime minister immunity from prosecution], did not abdicate his responsibilities and did not whine.”

”Incitement and division continues to devastate” Israeli society, he said, and lamented that “anyone who thinks otherwise automatically is labeled as a traitor.”

President Reuven Rivlin called the 1995 assassination “a moment in which Israeli statehood and democracy came under real danger,” adding that a “robust and lively democracy can and should allow dialogue, even it hurts.”

“But democracy,” he adds, “cannot allow for violence, and furthermore, it must denounce violence from within.”

Leftist ire was aroused over a published speakers list that includes a right-wing figure who was impolitic enough to mention that Rabin had not been a paragon of political harmony and had himself contributed to divisiveness.

Esther Brot, who was evacuated from her home in Ofra earlier this year, said on Israel Radio on Wednesday morning that in the days preceding Rabin’s murder, there was “incitement on both sides,” and recalled that Rabin had called settlers “a cancer in the body of the nation.”

In response, Meretz put out a statement calling on the rally’s organizers to disinvite her.

“Stop supporting the infuriating attempt to rewrite history,” Meretz said. “Rabin was a man of the Left and the peace camp, and he was murdered as a result of direct incitement from only one side.”

MK Eitan Broshi of Zionist Camp, who was Rabin’s adviser on agricultural settlement, noted the hypocrisy of those who claim they are for peace and national unity but are not willing to have the other side of the political spectrum at the rally.

He said he finds it “strange that those who want peace and are willing to speak to our enemies are not able to accept a speech by the mayor of Efrat at the rally in memory of Rabin.”

“We can’t ignore the murder itself, which was political, or the right-wing incitement before it, but we need to mend the tears in Israeli society…Whoever wants to talk about changes in Yehudah and Shomron for a [peace] agreement, but isn’t able to hear people from there speak in the center of Tel Aviv should think again,” he said.

MK Yehudah Glick said in a radio interveiw that “for 21 years I didn’t go, because I felt the organizers didn’t want me. In the last week, I spoke with the organizers, left-wing people and [Rabin’s daughter] Dalia Rabin, and I was convinced beyond any doubt that it’s different this time…I might go in a Likud shirt. I want to believe that this year people can come in Meretz and Likud shirts.”

Likud MK Yoav Kisch told Army Radio he might go, since it’s “not a public relations rally for left-wing organizations” and is supposed to be “a rally of bringing people closer and the unity of the people of Israel.”

Agriculture Minister Uri Ariel (Jewish Home) said that he is “concerned the speakers will forget the message of unity that was discussed, and it will turn into a left-wing rally against the Right.

“I’m debating whether to go or not, and will decide in the coming days,” Ariel said.