World U.N. Environment Chief: U.S. Likely to Live Up to Paris Accord
World 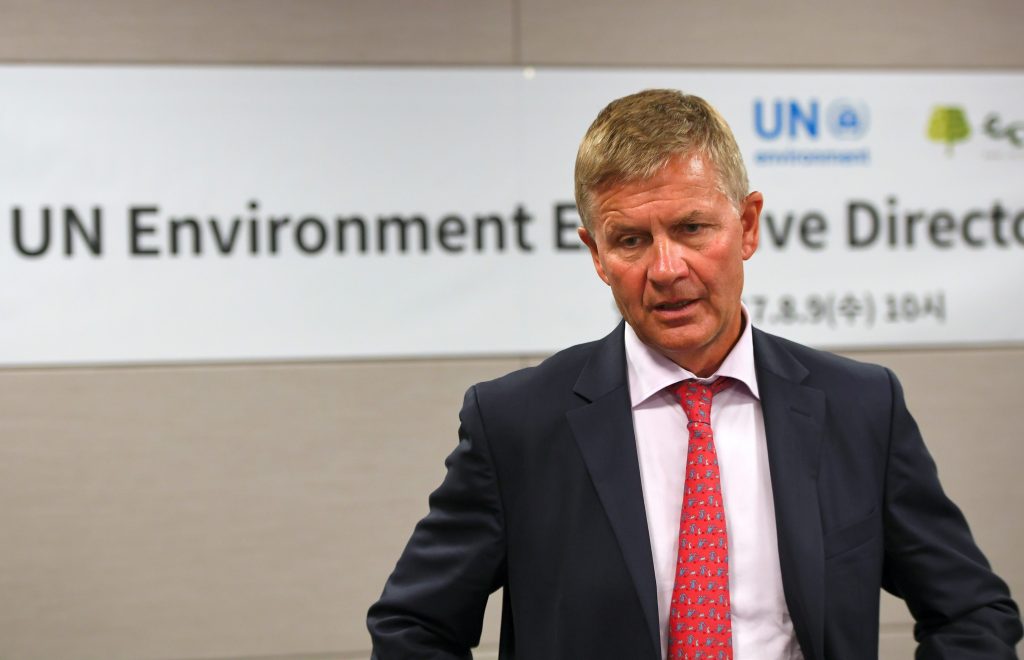 The head of the U.N. environment program said Tuesday the United States is likely to live up to the Paris climate deal despite President Donald Trump’s planned pullout, because “all the big American companies” are working toward greener operations.

The comments from UNEP executive director Erik Solheim came as the U.N. agency presented its latest “Emissions Gap” report, which gives a scientific assessment about how national efforts are affecting the greenhouse-gas-emission trend.

The report’s release ahead of a crucial climate meeting next week in Bonn, Germany, aims to inject new momentum to the Paris accord and even strengthen it in 2020.

Trump, however, has vowed to pull out the U.S. because he insists it’s unfair to the United States.

U.N. officials are increasingly citing the role of companies in the fight against climate change.

“There is one question that I get more often than any other question wherever I go on the planet, and it is a very simple one. It is: ‘What about Donald Trump?'” Solheim told a panel in Geneva by videoconference from Nairobi.

“In all likelihood, the United States of America will live up to its Paris commitment, not because of the White House, but because of the private sector,” he said. “All the big American companies are dedicated to go in the green direction.”

But UNEP said countries and industries still need to do more to meet targets to cut greenhouse-gas emissions. The report criticizes coal-fired electricity plants being built in emerging economies, and insists that investment in renewable energies will pay for itself — and even make money — over the long term.

“The Paris agreement boosted climate action, but momentum is clearly faltering,” said Edgar Gutierrez-Espeleta, Costa Rica’s environment minister who heads the 2017 U.N. Environment Assembly. “We face a stark choice: up our ambition, or suffer the consequences.”

The Paris accord aims to cap global temperature increases to 2 degrees Celsius by the year 2100 compared to average world temperatures at the start of the industrial era — and even hopes to limit the increase to 1.5 degrees C.

UNEP says trends suggest that even if current national commitments are met, a temperature increase of 3 degrees Celsius by the end of the century is “very likely — meaning that governments need to deliver much stronger pledges when they are revised in 2020.”

“Should the United States follow through with its stated intention to leave the Paris agreement in 2020, the picture could become even bleaker,” UNEP said.

Lead author John Christensen of U.N. Environment noted that some U.S. states like California were “acting independently of what the White House decides.” He said Trump’s bid to peel back constraints on the coal industry won’t mark a major shift because “it simply doesn’t pay off.”

He also said the U.S. targets in the Paris accord, as agreed by the Obama administration, were “not that ambitious in the first place.”

But Christensen told the Geneva panel that the Trump administration’s impact on efforts could affect “negotiation dynamics” with other countries and embolden “what I call ‘noise-makers:’ They are the ones that are opposed to the basic idea” of fighting climate change.

Bob Ward, an expert on climate-change policy at the London School of Economics, agreed that the coal industry is “unlikely to be revived in the United States because it is being displaced by cleaner and cheaper sources of energy.”

“Many countries now recognize that the transition to a low-carbon economy will generate sustainable growth and development, with lower poverty and higher living standards,” he said. “High-carbon economies look increasingly uncompetitive.”

A new round of U.N. climate talks known as COP 23 starts in Bonn, Germany, on Monday, when countries will take stock of their achievements and prepare more ambitious national goals.

On the positive, UNEP highlighted “rapidly expanding mitigation action” and says carbon-dioxide emissions have remained stable since 2014, thanks partly to renewable energy use in China and India. It cautioned that other greenhouse gases like methane continue to rise, however.

UNEP has trumpeted solar and wind energy, efficient appliances and cars, and efforts to preserve forests. Solheim cited tests this week on the world’s first solar-powered railroad in Australia and the launch of a hydrogen-run subway system in northern China.

“We are at the watershed moment: We have stopped the rise in CO2 (carbon dioxide) emissions — there is every reason to believe we can bring them down,” Solheim said. “The train is on the right track, but our duty is to speed it up.”