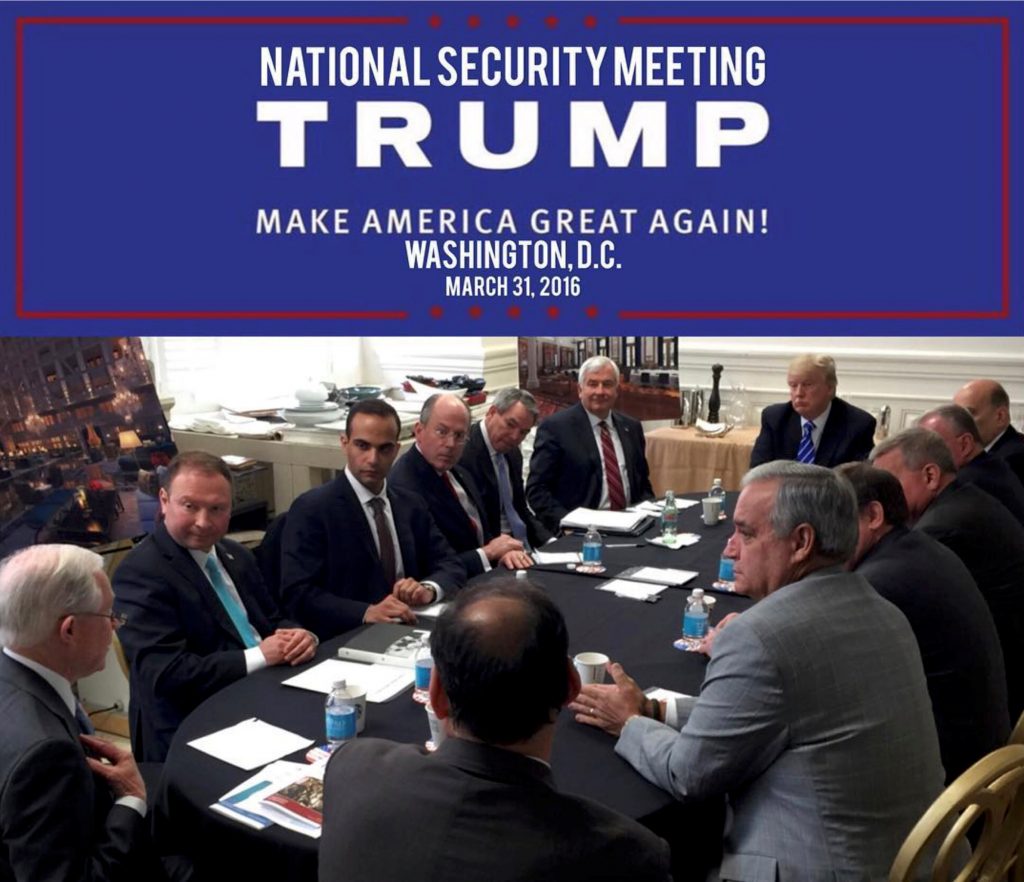 President Donald Trump lashed out against media coverage of the first charges unsealed in Special Counsel Robert Mueller’s probe of the 2016 election and distanced himself from George Papadopoulos, a former campaign adviser who pleaded guilty to lying to the FBI.

Papadopoulos, who served as a foreign-policy adviser during Trump’s campaign, secretly pleaded guilty on Oct. 5 to lying to FBI investigators about his contacts with Russian operatives and has since been cooperating with prosecutors. The plea deal was announced on Monday.

“The Fake News is working overtime. As Paul Manaforts lawyer said, there was ‘no collusion,’ and events mentioned took place long before he came to the campaign,” Trump also said Tuesday on Twitter.

“The biggest story yesterday,” he continued, was Democratic lobbyist Tony Podesta’s resignation from his namesake firm. Podesta Group is involved in Mueller’s investigation and was identified as “Company B” in the special counsel’s indictment of Manafort, Trump’s former campaign chairman, according to a person familiar with the matter.

“What he knows about Crooked Dems is earth-shattering,” Trump said in a pair of tweets.

Manafort and his deputy, Rick Gates, were charged with crimes including money laundering and illegal foreign lobbying. They were placed under house arrest as flight risks after pleading not guilty.

Trump also sought to shift focus back to his legislative agenda and to accusations against Democrats.

“I hope people will start to focus on our Massive Tax Cuts for Business (jobs) and the Middle Class (in addition to Democrat corruption)!” he tweeted.

Lawyers for Papadopoulos, Thomas Breen and Robert Stanley, said in a statement Monday that it was in their client’s best interest that they “refrain from commenting on George’s case.” Under the plea agreement with prosecutors, he’s likely to serve no more than six months and may avoid prison altogether.

Trump cited Papadopoulos as one of his foreign policy advisers in a March 2016 interview with The Washington Post, calling him an “excellent guy.” Papadopoulos attended at least one meeting with then-candidate Trump. According to prosecutors, various campaign officials, who were not named in court documents, supported Papadopoulos’s contacts with Russians.

The revelation of Papadopoulos’ plea agreement, in which Mueller outlined a series of conversations between the adviser and figures connected to the Russian government, is the first public indication that Mueller has evidence of contacts between Trump’s campaign and Russians attempting to interfere in the 2016 election that were earlier and deeper than previously known.

According to a court filing by Mueller, at least two high-level Trump campaign supervisors and other officials were aware of Papadopoulos’s activities and his contacts with the Russians.

“Yesterday we saw one more example of where the Russians were actively reaching out to Trump officials trying to offer dirt, emails, disparaging information about Hillary Clinton. It raises a whole host of additional questions,” Senator Mark Warner, the top Democrat on the Senate Intelligence Committee, told reporters Tuesday.

Senate Intelligence Committee Chairman Richard Burr told reporters that Papadopoulos was on the radar of the committee’s investigation into Russia meddling in the election.

“We were in constant conversation with his legal team,” Burr said. When asked if that conversation is over now because of legal action, Burr said, “I think it is.”

Kevin Downing, a lawyer for Manafort, denied any wrongdoing by his client and also defended Trump.

“President Donald Trump was correct. There is no evidence the Trump campaign colluded with the Russia government,” he said Monday in a statement.