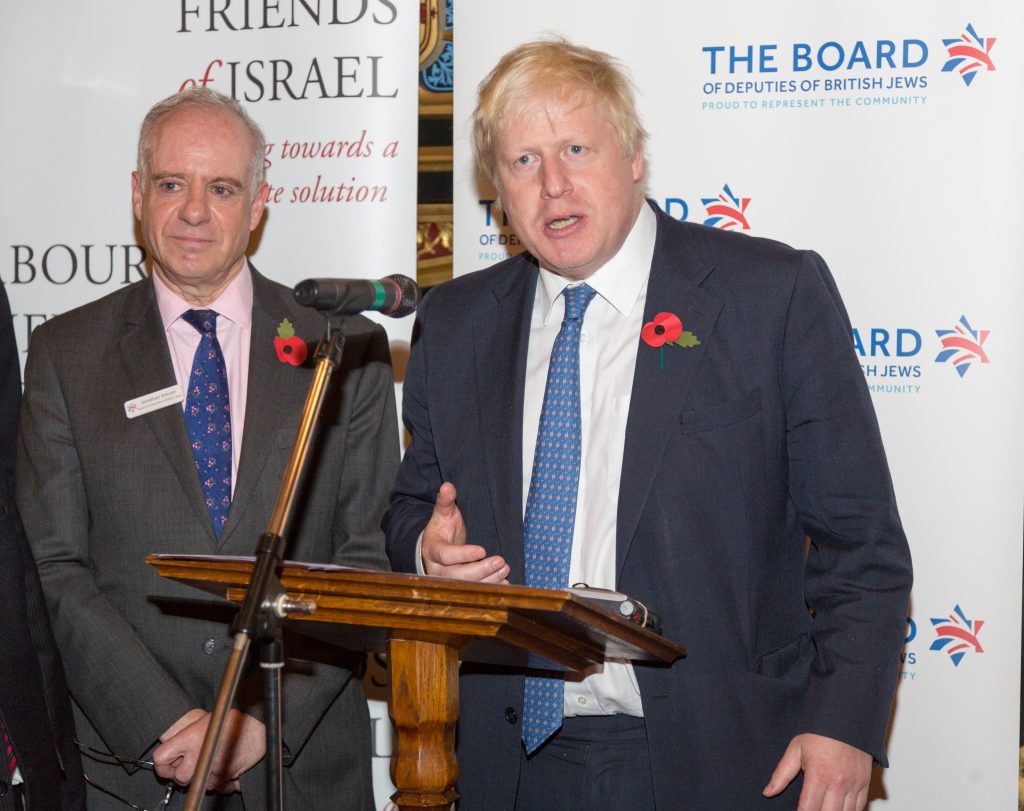 The centenary of the Balfour Declaration, which was the first public pledge of support by a government for the establishment of a national home for the Jewish people in Eretz Yisrael, is being celebrated in the U.K. with a number of events. Inevitably, the anniversary has been viewed with mixed feelings by some people. Earlier in the year, there were calls by the Palestinians for the U.K. to apologize for the Declaration, as well as a threat by the Palestinian Authority to sue the British government in an unspecified court of law.

However, the Conservative Government, led by Prime Minister Theresa May, has staunchly backed celebrating the milestone. Mrs. May said last week, “We are proud of the role that we played … and we will certainly mark the centenary with pride.”

On Monday, Foreign Secretary Boris Johnson spoke at a Parliamentary reception hosted by the Board of Deputies of British Jews, the democratically elected representative body of the U.K. Jewish community. In his speech at Speaker’s House, Mr. Johnson said, “The Balfour Declaration, whatever its defects, whatever its unfulfilled nature, paved the way for one of the greatest political triumphs of the 20th century, the creation of the State of Israel, which, after all, is a democracy, a liberal society, a beacon of hope, and which shares the values in which I passionately believe. This is an amazing achievement by humanity.”

He added, “Speaking as an ex-kibbutznik, who spent most of his time doing the washing up, I recognize the magic, the genius and miracle of Israel. And that is why we should mark Balfour with pride and with respect.”

The reception at the event, held in partnership with the All Party Britain-Israel Parliamentary Group and in association with Conservative, Labour and Liberal Democrat Friends of Israel, was also addressed by representatives of the Friends of Israel organizations. The president of the Board of Deputies, Mr. Jonathan Arkush, and Israeli Ambassador HE Mark Regev also spoke.

The Labour Party has not been quite so effusive in its response to the anniversary. Party leader Jeremy Corbyn declined an invitation to attend a celebratory dinner at which Israeli Prime Minister Binyamin Netanyahu and Mrs. May will both be present. Jonathan Goldstein, chairman of the Jewish Leadership Council, described this decision as “deeply unfortunate.” The Labour Party will be represented by the Shadow Foreign Secretary Emily Thornberry. However, Ms. Thornberry ruffled feathers when she said that she would not be “celebrating” the Balfour Declaration, but “marking” it.

In an interview with Middle East Eye, she said, “I think it was a turning point in the history of that area and I think probably the most important way of marking it is to recognize Palestine.” She added that she would be going to a Balfour meeting with Palestinians as well. Ms. Thornberry is a member of both the Labour Friends of Israel and the Labour Friends of Palestine groups.

Other events within the community included a ceremony hosted by the New West End Synagogue on Oct. 29, in Central London, together with the United Synagogue, the main centrist Orthodox umbrella organization in the U.K., attended by nearly 600 people. Guests of honor at the event were Chief Rabbi Ephraim Mirvis and Israeli Ambassador Mark Regev. Baroness Ruth Deech read the Balfour Declaration and response, while Alex Miller and Gabi Silver, youth members of New West End Synagogue, presented a number of historic readings.

Another key event is the Balfour Centenary Lecture, given on Wednesday by the renowned Jewish historian Simon Schama. The lecture will look at the background and details of the Balfour Declaration and will be chaired by Lord Rothschild, a descendant of Lord Lionel Rothschild, to whom the Declaration was addressed. Many other shuls and organizations around the country will also be hosting events to mark the occasion.