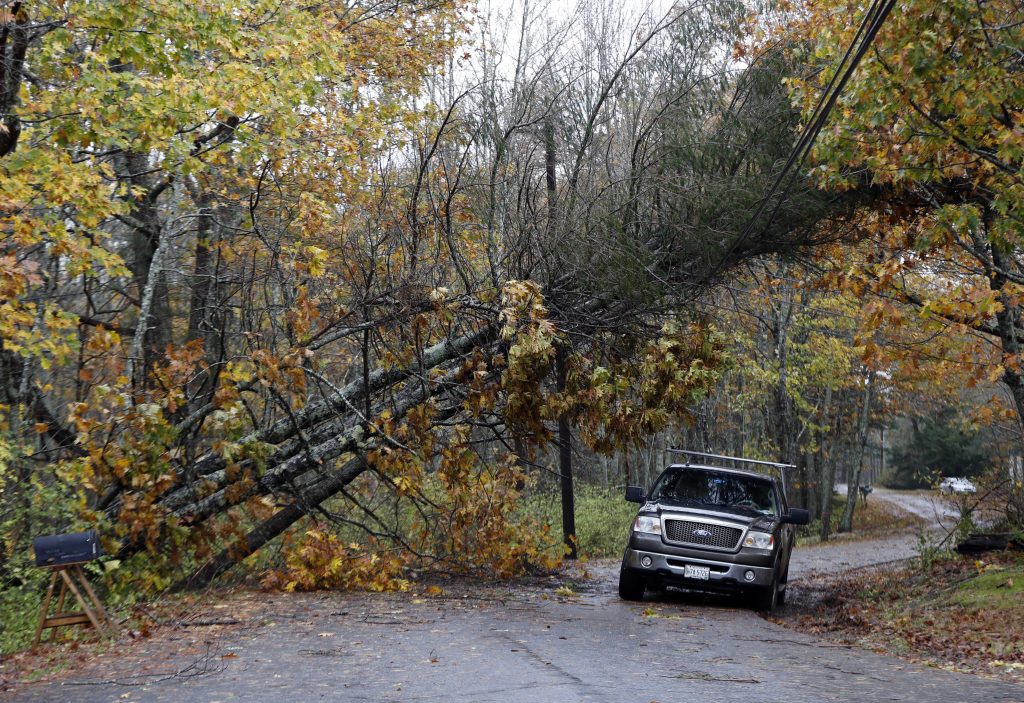 A severe storm packing hurricane-force wind gusts and soaking rain swept through the Northeast early Monday, knocking out power for nearly 1.5 million homes and businesses and forcing hundreds of schools to close in New England.

Falling trees knocked down power lines across the region, and some utility companies warned customers that power could be out for a few days. Trees also fell onto some homes and vehicles, but no serious injuries were reported.

New England got the brunt of the storm, which brought sustained winds of up to 50 mph in some spots. A gust of 130 mph was reported at the Mount Washington Observatory in New Hampshire, while winds hit 82 mph in Mashpee on Cape Cod in Massachusetts.

Utility company officials said it could be several days before power is restored in some parts of New England.

Maine was hit hard, with 492,000 homes and businesses losing electricity, surpassing the peak number from an infamous 1998 ice storm. The Portland International Jetport recorded a wind gust of 69 mph, and the Amtrak Downeaster service canceled a morning run due to downed trees on the tracks.

In Freeport, Maine, Rachel Graham, her husband and their two-year-old daughter, Priya, endured the storm in a yurt where they are staying while building a house on their property. They listened as 20 pine trees on their property snapped and wind lashed the yurt.

“It was really terrifying. You could feel everything and hear everything,” Graham said. “It was a lot of crashes and bangs.”

In hindsight, she and her husband said it wasn’t safe to have been in the yurt, but it was also unsafe to leave at the height of the storm.

The storm began making its way up the East Coast on Sunday, which also was the fifth anniversary of Superstorm Sandy. That 2012 storm devastated the nation’s most populous areas, was blamed for at least 182 deaths in the U.S. and Caribbean and more than $71 billion in damage in this country alone.

In the Boston suburb of Brookline, Helene Dunlap said her power went out after she heard a loud “kaboom” around 1:30 a.m. Monday. She went outside hours later to find a large tree had fallen on a neighboring home.

“It really shook the whole place up,” she said. “It was such a dark, stormy night that looking out the window we really couldn’t determine what was going on.”

She said she stocked up on some food and other supplies as soon as she heard the storm was coming.

“You’re in New England. You’ve got to be ready,” she said.

The Meriden Humane Society in Connecticut put out a call for volunteers on its social-media page Sunday night to help deal with flooding in its dog kennels. A couple of hours later, the humane society thanked the volunteers who turned out to help dig a “major trench” to drain water away from the building.

“Thanks to all of you, our dogs will be sleeping very comfortably and most importantly, very dry,” the society wrote on its social-media page.

In Plainfield, Vermont, the Maplefields convenience store had no power, so workers used a propane stove to make coffee.

The same storm system also caused problems earlier Sunday in Pennsylvania, New Jersey and New York. On the shoreline in Bayonne, New Jersey, a large barge was found washed up after apparently breaking free from its moorings during the storm.

In New York, the rush hour got off to a rocky start as service on Metro-North’s Danbury Branch in Connecticut was suspended due to a mudslide and signal power problems. Part of the Long Island Rail Road’s Ronkonkoma Branch was halted because of power lines on the tracks. Video posted on Twitter showed unhappy commuters crowding a station.