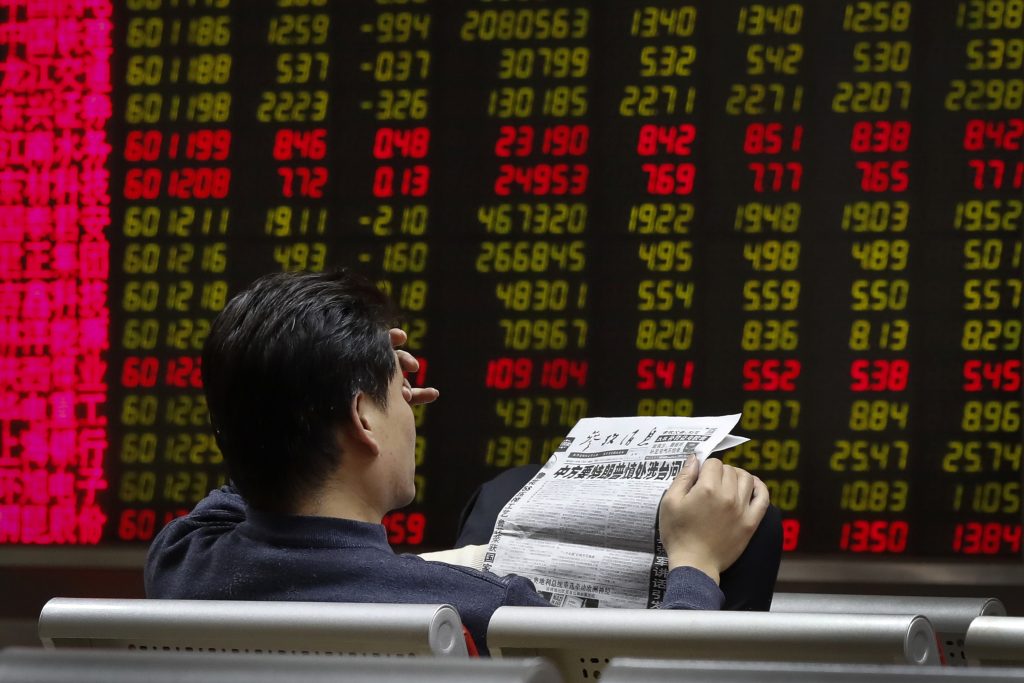 Asian shares gained on Friday as technology stocks were boosted by upbeat earnings from U.S. high-tech giants, while the euro hovered near a three-month low against the dollar after the European Central Bank extended its stimulus.

“Corporate earnings are rising to record levels in the world. And the IMF [International Monetary Fund] just upgraded its economic forecast for all of U.S., China, Europe and Japan,” said Mutsumi Kagawa, chief global strategist at Rakuten Securities.

Earnings from Alphabet, Microsoft and Amazon.com, the world’s second, third and fifth largest companies by market capitalization, were all upbeat, boosting their shares in after-hour trade.

Shares in those companies rose 2.8 percent, 4.5 percent and 7.6 percent respectively.

Prior to that, the U.S. S&P 500 Index gained 0.1 percent to edge near the record high touched last week, thanks to the robust global economy and solid corporate earnings.

As third-quarter earnings season nears the half-way mark, 74 percent of U.S. companies have topped expectations, above the 72 percent beat rate for the past four quarters.

The U.S. House of Representatives helped pave the way on Thursday for deep tax cuts sought by President Donald Trump, passing a budget blueprint for fiscal 2018 that will enable the tax legislation to win congressional approval without any Democratic votes.

“On the whole, growth shares were strong yesterday both in the U.S. and in Europe. And now that the Republicans can pass the tax reform, the tax cut debate now looks set to kick off next week,” said Nobuhiko Kuramochi, chief strategist at Mizuho Securities.

German shares hit a record high on Thursday, while the pan-European Eurofirst 300 Index gained 1.1 percent, its biggest gains in 3½ months, after the ECB extended its bond-buying program to September.

Although the ECB halved the size of its bond purchasing to 30 billion euro per month from January, it also promised years of stimulus and even left the door open to backtracking.

Yields on debt issued by Southern European countries seen as less creditworthy also fell, with the premium that investors demand from Italian bonds falling to 1.53 percentage points, near a 7½-month low touched in early August.

Spanish debt yields also fell on hopes of a breakthrough in the Catalan crisis, although the risk of direct confrontation between Madrid and Barcelona remains.

The Spanish Senate is to due to approve the takeover of Catalonia’s institutions and police on Friday, and give the government in Madrid the power to remove the Catalan president, a move that could spark civil protests.

In the currency market, the ECB’s dovish stance sent the euro to a three-month low of $1.1631.

The Australian dollar fell to 3½-month low of $0.7625 after Australia’s conservative coalition government lost its one-seat parliamentary majority following a High Court ruling that Deputy Prime Minister Barnaby Joyce is ineligible to remain in Parliament. The court has now ordered a by-election for Joyce’s seat.

Australia’s S&P/ASX200 fell about 0.2 percent after the news of Joyce’s disqualification.

In commodities, Brent crude futures held firm after closing at a 27-month high on Thursday as the market focused in on Saudi Arabia’s comments about ending a global supply glut, brushing off an unexpected increase in U.S. crude inventories and high U.S. production and exports.