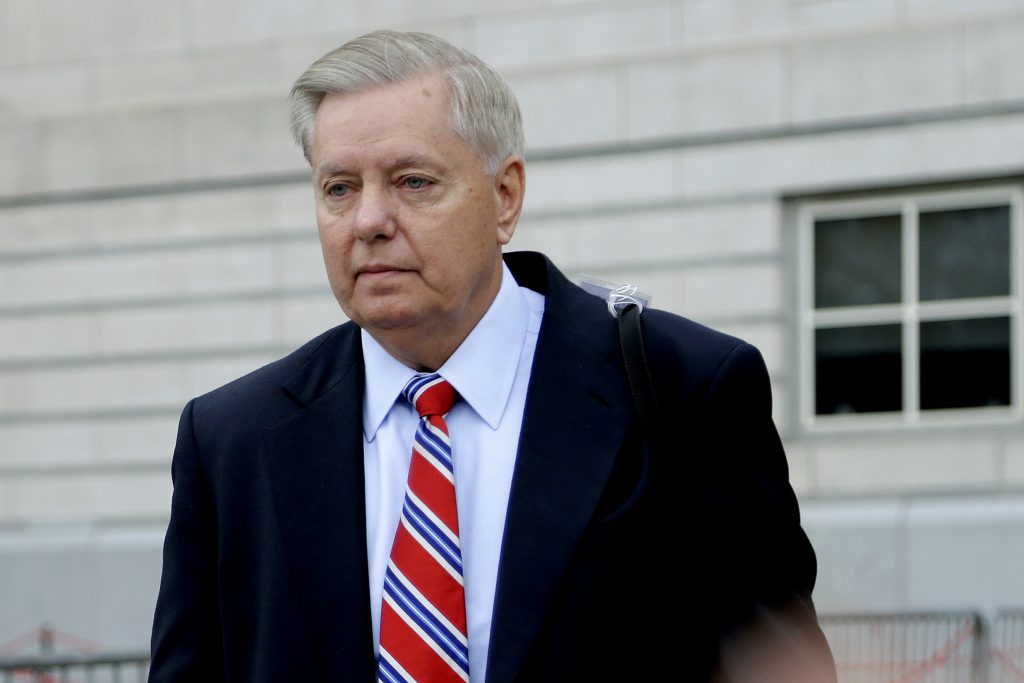 Sen. Bob Menendez got a hand from colleagues on both sides of the political aisle in his corruption trial Thursday, with Republican Sen. Lindsey Graham and fellow New Jersey Democratic Sen. Cory Booker testifying that he is trustworthy and honest.

After their testimony, the trial devolved into heated arguments between the judge and defense attorneys, who said they planned to file for a mistrial based on his rulings that, they said, hamstrung their case by preventing the jury from hearing certain witnesses and seeing certain exhibits.

“I am deeply disappointed that it came to the point that my lawyers had to make the motion they made today,” Menendez said in brief remarks outside the courthouse. “What they said in court stands for how I feel, their words stand for where we view things at this moment, but we will carry on.”

The defense was expected to file a formal motion later Thursday or Friday. It comes as the trial winds down after eight weeks, during which neither Menendez nor co-defendant Salomon Melgen testified.

Menendez is charged with accepting free trips on a private jet and other gifts from Melgen, a longtime friend, in exchange for lobbying government officials on behalf of Melgen’s business interests, including an $8.9 million billing dispute with Medicare.

Defense attorneys called Graham, who has known Menendez since their days in Congress in the early 1990s, and Booker, who has served alongside Menendez for the last four years.

“In very difficult circumstances, he always keeps his word,” Graham, from South Carolina, said during about six minutes of testimony. “A handshake is all you need from Bob. He’s a very honest, hardworking senator.”

After court recessed, Menendez said the two men displayed “extraordinary courage,” and he thanked them for “telling the jury about who I really am.”

The political stakes of the trial are high, with Democratic senators facing pressure from national Republicans to push Menendez out of the Senate if he’s convicted. If Menendez resigns or is voted out of the Senate by a two-thirds majority before Republican Gov. Chris Christie leaves office in January, Christie would get to choose a replacement for the last year of the term.

Menendez is up for re-election next year.

Graham said he got to know Menendez when they worked on immigration reform and on national security issues affecting Israel.

“He can push back against a lot of political pressure, which is very hard to do in my business,” Graham said.

The trial has been punctuated by numerous animated debates between defense attorneys and U.S. District Judge William Walls. On Thursday, with the jury sent home early, they accused Walls of allowing prosecutors more leeway in introducing witnesses and documents while denying defense requests to call witnesses and show the jury documents that could cast doubt on the prosecution’s theory of a bribery scheme.

One example brought up by defense attorneys was that Walls didn’t let them introduce documents that could have shown that Menendez sought to discuss the Medicare policy, rather than advocate for Melgen, when he met with federal health officials.

“We have been precluded, both during cross-examination and repeatedly in our case, from putting on our defense case,” Melgen attorney Kirk Ogrosky told Walls.

Menendez attorney Abbe Lowell chided Walls for not allowing him to introduce a letter that Marc Elias, then representing Menendez, wrote to Senate ethics officers in 2013, saying they were doing an internal review of Menendez’s flights — evidence, Lowell said, that could contradict the government’s contention that Menendez was engaged in concealment.

Elias was scheduled to testify Thursday but wasn’t called.

“This is your argument and you’re entitled to it, but at this point you really have no standing by way of merit,” he said.

The defense is expected to rest its case soon, after which the two sides are expected to spar over how Walls is to instruct the jury on the law.

The definition of official bribery was narrowed by a 2016 U.S. Supreme Court ruling that has been responsible for the recent overturning of several politicians’ corruption convictions.