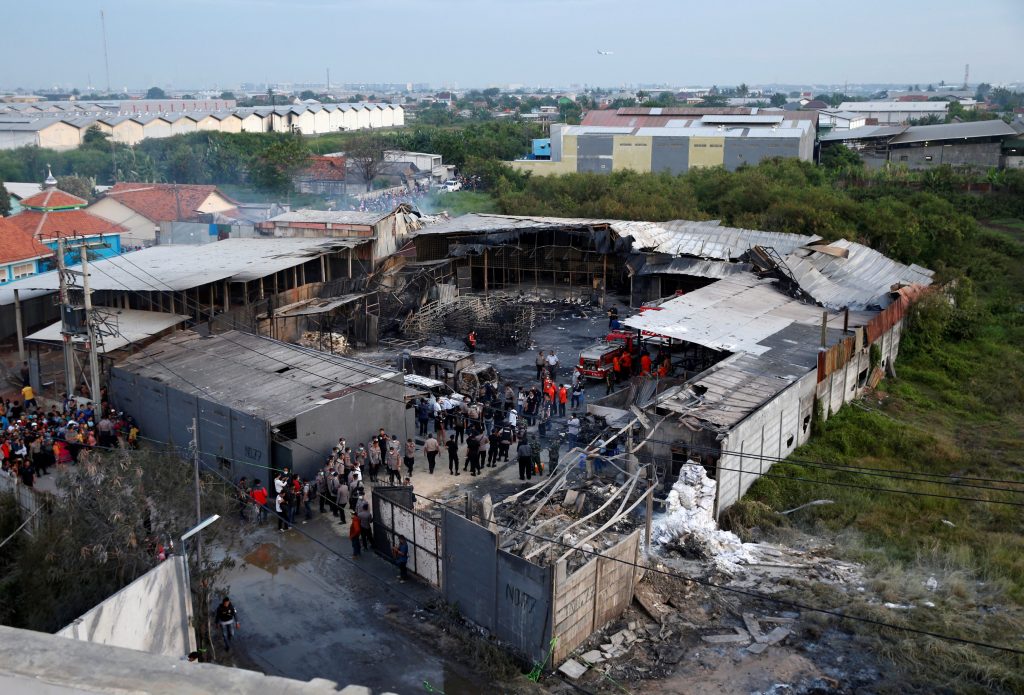 An explosion and inferno at a fireworks factory near the Indonesian capital on Thursday killed at least 47 people, most of them female workers who were apparently locked inside, and injured dozens.

Witnesses said a huge explosion was heard from the factory at about 10 a.m. and then smaller blasts echoed across the neighborhood as orange flames jumped from the building and columns of black smoke billowed from it.

The death toll could rise as many of those who escaped suffered extensive burns, said Nico Afinta, general crimes director at Jakarta police. He said bodies were found piled at the rear of the building.

Police said 103 people were working at the factory and 10 are still unaccounted for. It’s possible some or all of those 10 had not come to work or suffered only minor injuries and didn’t seek medical attention, said Jakarta police spokesman Argo Yuwono.

A local resident told Indonesia’s MetroTV that he saw police and residents smash through a wall of the factory so trapped workers could escape. Some of the victims were burning as they ran out, he said.

“The fire began with a strong explosion like a bomb,” Benny, who goes by one name, told the TV channel.

A worker who escaped the fire said the factory’s staff was mostly women employed on a casual basis.

A worker who escaped the Indonesian factory fire that killed at least 47 people says most of those employed at the factory were women. (Oct. 26)

Mumum, who goes by one name, told Indonesia’s TVOne that she started working at the factory a few weeks ago and was paid 40,000 rupiah ($3) a day.

“I lost so many friends. I couldn’t help. Everybody just ran for safety,” she said, weeping.

The factory is located next to a residential area in Tangerang, a city in Banten province on the western outskirts of Jakarta. A police report said the fire spread after an explosion that caused the roof to collapse.

Video showed flames shooting meters above the structure and billowing clouds of black smoke spreading across the neighborhood as residents looked on in horror.

The factory had been operating for less than two months, he said.

“We are still investigating the cause of the fire and questioning witnesses,” Kurniawan told reporters. “Factory owners or anyone who neglects and violates safety rules should be held legally responsible.”

MetroTV, quoting a local official, said that although the factory had a permit, its proximity to a residential area was against regulations.

Safety laws are inconsistently enforced or even completely ignored in Indonesia, a poor and sprawling archipelago nation where worker rights are often treated as a lower priority than economic growth and jobs.