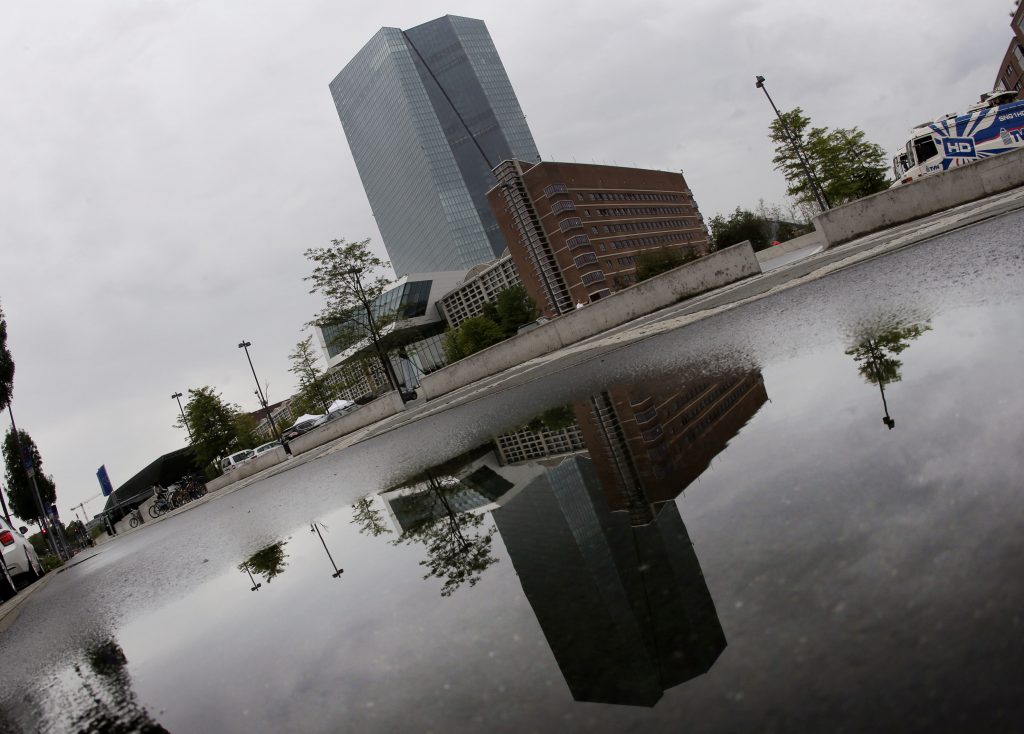 The European Central Bank (ECB) will ease the pace of its bond-buying stimulus program — carefully dialing back a measure that has helped the eurozone recover from a debt crisis that threatened to break up the currency union.

The ECB said Thursday it would reduce its bond purchases to €30 billion ($35 billion) per month starting in January, from €60 billion currently. The purchases would continue at least until September 2018.

The bank kept some flexibility in its statement, saying that it could increase the purchases if the 19-country eurozone endures a new economic shock.

Increasingly strong economic growth has enabled the ECB to look toward phasing out extraordinary stimulus measures, in hopes that higher wages will eventually push inflation up from 1.5 percent to its goal of just under 2 percent.

The withdrawal of the stimulus will have wide-ranging consequences on investors, companies and governments — one reason the ECB is moving slowly. Eventually, governments may pay more for borrowing and have less to spend, while companies that would not be profitable under normal interest rates may go out of business. But the ECB’s slow pace in removing the stimulus and raising interest rates means the impact will be slow. So savers with money in conservative holdings such as bank deposits will endure another several years of paltry or nonexistent returns.

Stimulus is believed to have pushed up prices of a broad range of assets, from stocks to real estate. It’s not clear what will happen to their prices when the stimulus is withdrawn.

The watchword at Draghi’s news conference was caution. He said Thursday’s decision meant the central bank was confident in the economy but “reflects that we are not there yet” and that the upswing “still relies very much on our monetary support.”

He declined to call the reduction a taper, the term used to describe the month-by-month reduction of purchases by which the U.S. Federal Reserve exited its own bond-buying stimulus. Instead, he called it a “recalibration,” which underlines that the remaining stimulus has no definite end date.

The bond purchases were started in March 2015 amid fears that low or negative inflation would become chronic, a trap known as deflation that can hurt the economy and be difficult to escape. Inflation has responded only slowly. The ECB must think about ending the program in part because it could run out of eligible government and corporate bonds to purchase. The program has also been opposed by a minority of stimulus skeptics on the governing council.

The bank says it has room to end the stimulus as the economy continues to grow faster than expected. The 19 countries that share the euro currency saw their combined economy grow 2.3 percent in the second quarter compared with the same quarter the year before. The crisis over high debt in countries like Italy, Greece, Spain, Portugal, Ireland and Cyprus has eased, though levels remain high in Italy and Greece still faces painful unemployment rates and a shrunken economy — despite getting three rounds of bailout loans.

Under its stimulus program, the ECB buys bonds from banks, adding newly created money to the reserve accounts the banks are required to have at the ECB. That is the pipeline the ECB uses to push that new money into the hands of banks. Ultimately, the effect should be to increase the availability of credit, drive down longer-term interest rates, and increase inflation.

The bond purchases have driven down bond market borrowing rates, with the result that the German 10-year bond yields 0.47 percent. By comparison, the equivalent U.S. Treasurys yield around 2.4 percent. But inflation has been slower to respond. The ECB foresees only 1.5 percent for 2019, still short of its goal.

That is one reason the ECB has made clear it intends to move slowly in withdrawing its stimulus. In particular, it says it will keep its short-term interest rate benchmark at zero until “well after” the bond purchases end. If the purchases end in the second half of 2018, that means it would likely be 2019 before the ECB would start raising interest rates. It has also said it intends to keep reinvesting the proceeds of maturing bonds, meaning it will keep existing stimulus in the financial system even though no more new money is being pumped in.

The ECB also wants to avoid sending the euro higher, which could hurt eurozone exports. Less stimulus and higher interest can strengthen a currency’s exchange rate.

Carsten Brzeski, chief economist at ING Germany, said the pace of stimulus reduction “illustrates that the ECB wants to start the exit as cautiously as possible, ideally without seeing the euro appreciate or bond yields increase.” The market seemed to agree, with the euro trading 0.9 percent lower on the day at $1.1709 at 1351 GMT.

All that puts the ECB well behind the U.S. Fed. It has ended bond purchases, started raising interest rates and this month is beginning the gradual process of letting its $4.5 trillion pile of bonds run down as the bonds mature. That is because the U.S. recovery bounced back faster from the global financial crisis and the Great Recession.

The ECB is not alone in its inflation struggle. Inflation has been slow in recovering in the U.S. and global economies as well; economists are not sure of all the reasons, but globalization, internet commerce and fears of a new global crisis have all been put forward as reasons.