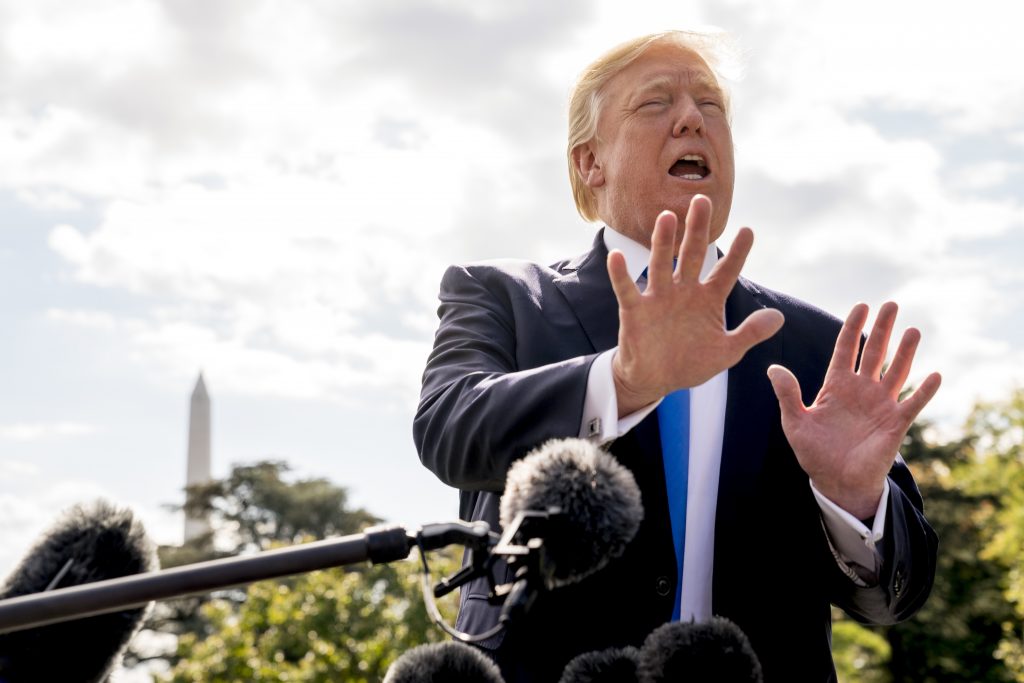 Congressional Republicans showed scant signs Wednesday of turning on Donald Trump, rallying instead behind their party’s tax-cutting plans a day after a pair of prominent GOP senators denounced the president in scathing terms.

“I just think that right now our members are pretty well convinced that we need to put some points on the board, get some wins,” said Sen. John Thune of South Dakota, the No. 3 Senate Republican leader. “So I think the cohesion in the conference right now is pretty strong, particularly on the issue of tax reform.”

Thune’s comments came after an uncommon day in which GOP Sens. Jeff Flake of Arizona and Bob Corker of Tennessee openly assailed the president. Flake accused Trump of “a flagrant disregard for truth and decency,” while Corker said he was “untruthful” and debasing the nation.

Flake, who says he won’t seek re-election next year because a traditional conservative like him has become all but unelectable in the GOP, stepped up his attack on Trump Wednesday. He invoked the 1950s demagoguery of Sen. Joseph McCarthy and said, “You can’t continue to just remain silent” about Trump’s politics and behavior.

At the White House, Trump dismissed the criticism, insisting there is “great unity in the Republican Party,” and saying he expects the two senators to back GOP tax cuts.

The president said Flake bowed out because he couldn’t win next year.

“His poll numbers are terrible. He’s done terribly for the great people of Arizona, a state that likes Donald Trump very much, as even you will admit. And he would have never won,” Trump said.

While Flake’s and Corker’s comments produced a day of high drama and underscored GOP divisions, there was no evidence that they’d caused a broad shift that could derail the party’s legislative agenda.

“We’re all professionals here,” said Sen. David Perdue, R-Ga. “These two guys can say and do what they want to do. But right now, we’ve got a bigger issue, and the bigger issue is to get this tax bill done.”

Asked whether Corker’s and Flake’s discontent could make it harder for Republicans to push their tax cuts through Congress, Thune said, “Everybody gets to vote the way they want to vote, but both of them are very conscientious and principled and want to do the right thing.”

Even so, Flake was making no promises about backing the still evolving GOP tax package, which could make federal deficits far worse.

“I don’t expect to be voting differently than I would before,” Flake said. “Certainly on this tax bill, for example, I know that a lot of us are very concerned about the debt and deficit and want to make sure this is actually tax reform and not just a tax cut.”

Sen. Lindsey Graham, R-S.C., a Trump critic during the 2016 presidential campaign who’s been working with him on health care and other issues, said his focus was on legislative accomplishments.

“I’ll stand up when I need to, but I’m trying to get taxes cut, Obamacare repealed and win a war we can’t afford to lose,” Graham said. He said he’s told Trump, “You kick every barking dog in Washington, you’ll wind up spending all your time kicking barking dogs.”

Sen. Susan Collins, R-Maine, said lawmakers must “distinguish between the president’s policy agenda and his approach to governing.”

A moderate who helped block the party’s drive to annul the Obama health-care law, Collins said, “There have been many of us for a long time who have had concerns about his approach to governing.” She added, “But I accept the fact that he is president now. We need to learn to work better together and respect the roles that each of us have to play.”

Trump took to Twitter Wednesday, saying Flake and Corker — who’s also retiring — aren’t running for re-election because “they had zero chance of being elected.”

He also contended that Flake and Corker stand alone, boasting in several tweets that he had gotten standing ovations at a Senate Republicans’ luncheon Tuesday at the Capitol.

Other Republicans bemoaned the GOP infighting.

“I wish we didn’t have a personal discord. It distracts us from the main course,” said Sen. Richard Shelby of Alabama. “But it is what it is.”

Shelby said Trump had a right to defend himself in response to the criticism.

“I attack you, you’re going to fight back, I hope,” Shelby said. Pressed on whether it is presidential to rise above personal attacks, Shelby said, “You might ask is it being senatorial, too?”

Sen. John Boozman, R-Ark., declined to comment on Flake’s criticism, and when asked if Trump is fit for office, said, “Of course he is.”

Flake cited the era of McCarthy, the Republican Wisconsin senator whose smear tactics alleging Communist infiltration ultimately led to his censure. In an op-ed column in The Washington Post, Flake quoted Joseph Welch, an Army lawyer, who stood up to McCarthy in a June 1954 hearing and demanded, “Have you no sense of decency, Sir?”

“The moral power of Welch’s words ended McCarthy’s rampage on American values, and effectively his career as well,” Flake wrote. “We face just such a time now. We have again forgotten who we are supposed to be.”