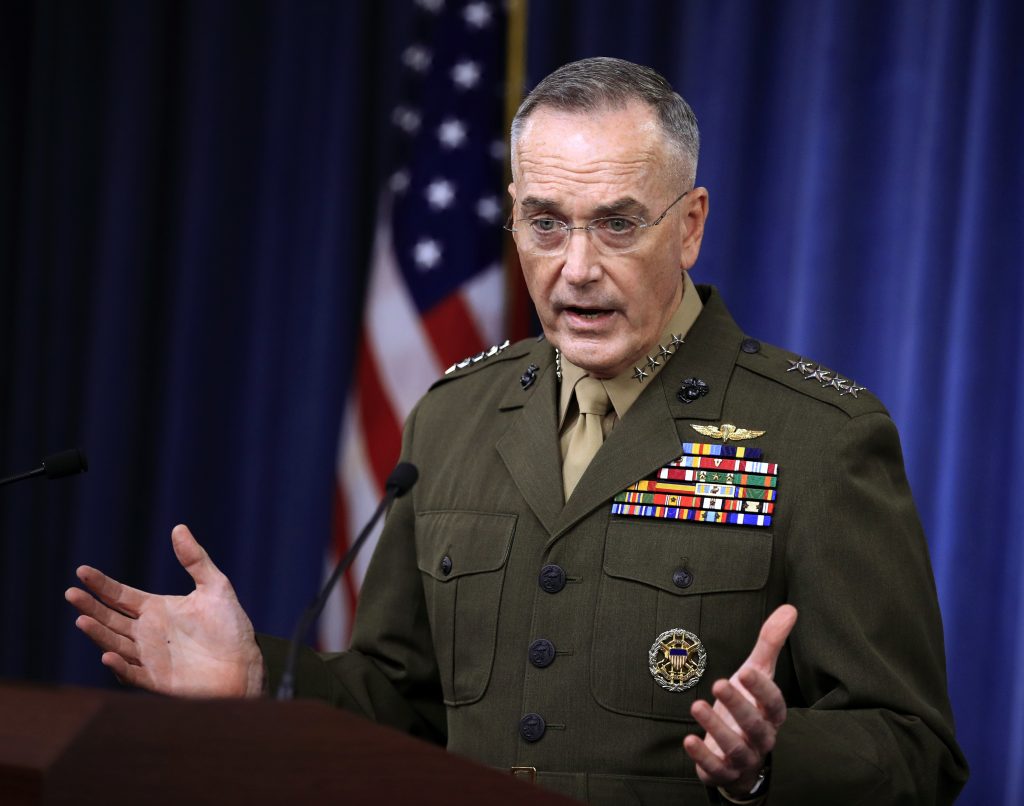 The U.S. special forces unit ambushed by Islamic terrorists in Niger didn’t call for help until an hour into their first contact with the enemy, the top U.S. general says, conceding many questions linger about the assault that killed four American troops and triggered a political brawl.

Marine Gen. Joseph Dunford, chairman of the Joint Chiefs of Staff, told reporters that the American people and the fallen soldiers’ families deserve answers about the deadly ambush in the West African nation. But Dunford said Monday that he still lacks many details about how the attack unfolded.

At a Pentagon news conference, Dunford asked for patience as the military continues to investigate the incident.

Dunford’s description of the assault, however, underscored how long the mid-morning attack dragged on, and that it was many hours before the wounded and killed were evacuated. He said that “within minutes” after the unit called for assistance, a U.S. drone was moved into position overhead, providing surveillance and full-motion video. He declined to say if it was armed, but said it did not fire.

Another hour went by before French fighter jets arrived, but the wounded weren’t taken out until later in the afternoon when French helicopters arrived along with additional Niger troops. The bodies of three Green Berets who were killed were evacuated that evening, he said.

“I make no judgment as to how long it took them to ask for support,” Dunford said. “I don’t know that they thought they needed support prior to that time. I don’t know how this attack unfolded. I don’t know what their initial assessment was of what they were confronted with.”

A battle-hardened commander, Dunford recalled situations when “you’re confronted with enemy contact, your initial assessment is you can deal with that contact with the resources that you have.”

He added that under the military’s rules, U.S. forces only accompany Niger troops on missions in that area when “the chances of enemy contact are unlikely.” But he also agreed that it is an inherently dangerous area, and U.S. forces are there as part of a training and advising mission to help local Niger forces learn to deal with the various al-Qaida and IS-linked groups operating in the region.

Dunford acknowledged that nearly three weeks after the attack, many questions remain. They include whether the U.S. had adequate intelligence, equipment and training, whether there was an accurate assessment of the threat in that area, and how the U.S. troops became separated in the fight. Another question is why it took so long to recover the body of a fourth American serviceman, Sgt. La David Johnson, who was missing for two days before his body was found by Niger troops and turned over to the U.S.

Dunford said the 12-member Army special forces unit had accompanied 30 Nigerien forces on a reconnaissance mission to an area near the village of Tongo, about 85 kilometers north of the capital on Oct. 3. They ended up spending the night there, and when they were returning to their base the next morning, they encountered about 50 enemy fighters traveling by vehicle, carrying small arms and rocket-propelled grenade launchers.

Dunford said the White House was notified by the operations center when it became clear that at least three U.S. forces had been killed, and more direct notifications were made when officials realized that Johnson was missing. When he received the call about Johnson, Dunford said he made a “20-second” call to Defense Secretary Jim Mattis and got immediate approval to bring the “full weight of the U.S. government to bear” in order to locate the missing soldier.

Independent of the events surrounding the attack, Johnson’s death and his family’s ordeal have triggered a major political row. After Johnson’s body was returned to the U.S., President Donald Trump said at one point that he had done more than any of his predecessors to honor the dead and console their families.

Members of Congress are also demanding answers. Last week, Sen. John McCain, the Republican chairman of the Armed Services Committee, even threatened a subpoena to accelerate the flow of information from the administration. Asked about the congressional complaints, Dunford said that if lawmakers believe they aren’t getting enough information, “then I need to double my efforts to provide them with information.”

He said the military will try to wrap up its investigation into the incident as quickly as possible. The FBI is also investigating, but that probe likely focuses on counterterrorism and any information or intelligence related to threats to the U.S.

Dunford defended the broader American mission in Niger, saying U.S. forces have been in the country intermittently for more than two decades. Currently, some 800 U.S. service members are supporting a French-led mission to defeat the Islamic State, al-Qaida and Boko Haram in West Africa.

“We are back to conducting operations as normal,” he said. “Our intent is to continue operations there and continue to train, advise, assist our partners.”