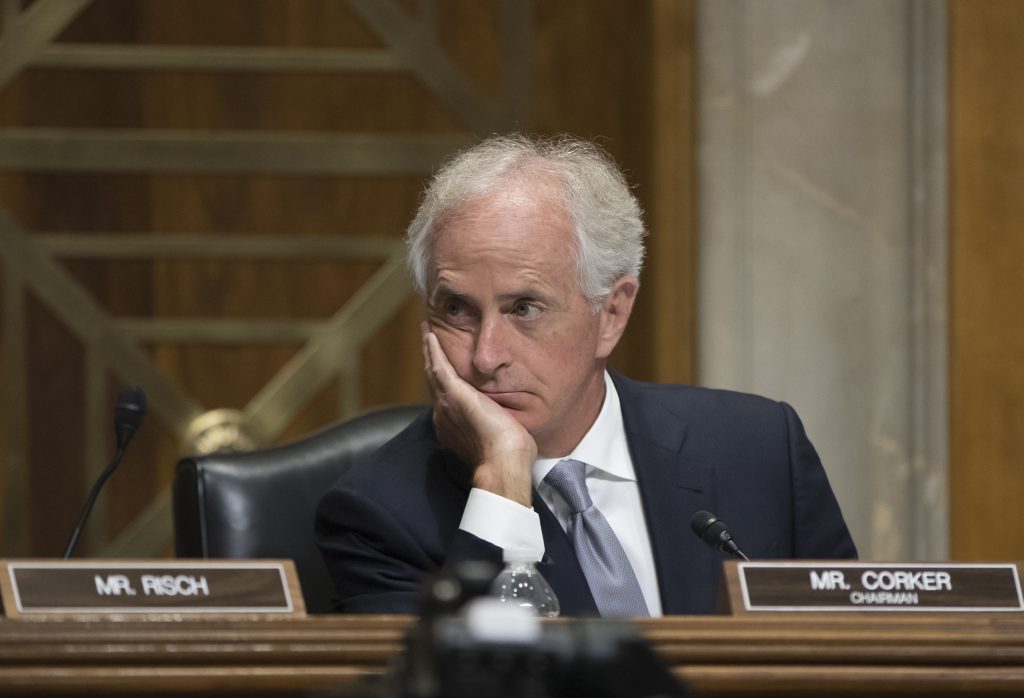 In a startling verbal assault on the president of his own party, Republican Sen. Bob Corker charged Tuesday that Donald Trump “debases our nation” with constant untruths, name-calling and bullying, and will leave behind a sad legacy of damaging division.

A furious Pres. Trump lashed back over Twitter, calling Corker “incompetent,” saying he “doesn’t have a clue” and claiming the two-term lawmaker “couldn’t get elected dogcatcher in Tennessee.”

The angry exchange unfolded just hours before Pres. Trump lunched with GOP senators at the Capitol to try to unite the party around a rewrite of the nation’s tax code. The meeting lasted nearly 90 minutes, and Corker said afterward that he and the president did not interact during the meal.

“We’re going to concentrate on what our agenda is, and not any of these other distractions that you all may be interested in,” McConnell said.

Tax overhaul is an urgent task for Republicans who’ve failed to notch a single significant legislative achievement this year despite controlling the White House and both chambers of Congress. Yet the dramatic escalation of the feud between Corker and Pres. Trump seemed certain to divert lawmakers’ attention.

When Pres. Trump arrived at the Capitol, McConnell accompanied him into the GOP lunch, both men smiling while ignoring shouted questions about Corker’s comments.

Suddenly, a protester emerged from the press scrum, loudly screaming “Trump is treason!” and throwing a handful of Russian flags with Pres. Trump’s name on them in the direction of the president. Pres. Trump and McConnell kept walking as security officials removed the protester, who identified himself to reporters as Ryan Clayton of Americans Take Action.

The incident added to the chaos of the day.

Earlier, Corker unloaded on Pres. Trump in a series of hallway interviews at the Capitol, first with CNN and then other outlets including The Associated Press.

“When his term is over, the debasing of our nation, the constant non-truth-telling, just the name-calling, I think the debasement of our nation will be what he’ll be remembered most for and that’s regretful,” Corker said. “His governing model is to divide and to attempt to bully and to use untruths.”

Corker, who is retiring from the Senate and therefore can fear no political repercussions, said that he and others had attempted to intervene with Pres. Trump over the months but “he’s obviously not going to rise to the occasion as president.”

“Unfortunately, I think world leaders are very aware that much of what he says is untrue,” Corker said. He stopped short of calling Pres. Trump a liar and didn’t respond when asked if Pres. Trump should be removed from office.

Tuesday’s war of words intensified a simmering feud between the two men. Corker has been starkly critical of Pres. Trump in recent weeks, alleging at one point that the president’s careless rhetoric toward foreign powers could lead America toward World War III. That prompted Pres. Trump to label his antagonist “Liddle’ Bob Corker” and claim, falsely, that Corker had decided to retire after begging for an endorsement Pres. Trump wouldn’t give.

The latest exchange began when Corker said Tuesday morning on NBC that Pres. Trump should leave it to Congress to set the course on taxes instead of intervening to shoot down one idea or another, as the president did Monday when he assured voters over Twitter that the tax package would leave their 401(k) plans intact.

That led to an angry Twitter response from Pres. Trump, who said, “Bob Corker, who helped President O give us the bad Iran Deal & couldn’t get elected dogcatcher in Tennessee, is now fighting Tax Cuts. …”

Corker, who chairs the Foreign Relations Committee, responded on his own Twitter account: “Same untruths from an utterly untruthful president. #AlertTheDaycareStaff.”

The back-and-forth then escalated even further as Corker launched a series of withering criticisms against Pres. Trump in interviews at the Capitol prompting more Twitter fire from Pres. Trump and still more angry retorts from Corker.

In one tweet, Pres. Trump wrote, “People like liddle’ Bob Corker have set the U.S. way back. Now we move forward!”

It was not clear how the conflict would end, if at all. Privately, Senate GOP aides were expressing dismay at a dispute that could only frustrate their already stymied efforts to produce results to take to voters in next year’s midterm elections.

Pres. Trump spoke approvingly about the GOP tax efforts before leaving the White House to come to Capitol Hill, but ignored shouted questions about Corker.

Tuesday’s lunch already had potential for more than a few awkward moments given Pres. Trump’s recent disputes with other GOP senators including John McCain of Arizona and McConnell, R-Ky.

Pres. Trump has blamed them all for the failure of his agenda, saying it’s not his fault. On the other hand, after meeting last week with McConnell, Pres. Trump promised to intercede with his former top adviser Steve Bannon, who is now on the outside promising an all-out war on the GOP establishment by urging primary challenges against a number of sitting GOP senators.